I was going to start with "Duck, Duck, Goose" (perhaps the greatest of all games), but I wasn't counting on the mud. I was told we were going to be teaching in a community center, but this particular "community center" was a tarpaulin tent, about 20'-by-20' with a couple of wood benches set on muddy, sloping dirt next to a creek bed that was used for a dumping ground, latrine, and pig feeding area. Now, when I hear "community center" I usually think of drinking fountains and utility rooms, vending machines, and plenty of parking. I needed to shift my imagination to suit the fact that we would be teaching the arts to teenage girls in what was essentially a campsite.   We had gone to Haiti, six artists in total, to work with adolescent girls in the tent camp at Bolous. This is one of the areas inhabited by the tens of thousands of Haitians who were displaced after the earthquake. This particular tent city is pitched on what used to be the only golf course in Haiti, a little nine-hole course at a country club. There's a cholera treatment center in what was the parking lot and a health clinic next to the tennis courts. A school for the kids of the camp is on what I imagine was the seventh-hole putting green. (Not really, but you get the point.)

Our little project was called Girls United and was sponsored by several organizations such as Meridian Health Foundation, Full-Circle Learning, The United Nations Foundation's Girl Up, and J/P Haitian Relief Organization. We were going to spend 10 days teaching teen girls that were pre-selected by the community at the tent city. Our goal was to use the arts to inspire, build confidence, and help heal the trauma that these girls had gone through with the earthquake. In the afternoons, we would caravan in a "Tap Tap" up to Petionville and teach the same program to girls at Haiti's only YWCA. ("Tap Taps" are the colorfully converted Toyota pickups that operate as taxis and buses throughout Haiti. You "tap tap" on the roof or the side when you want to get out -- hence the name.)   The camp itself was run by the J/P Haitian Relief Organization. This is an exceptional group of people working for an NGO founded by Sean Penn who have taken over the care and wellbeing of 50,000 people for the past year and a half. They have a medical clinic, a school, cholera treatment center, rubble removal, and are actively working to relocate people back into their neighborhoods. We stayed in tents in the yard of their hub -- a kind of nonprofit hippie house with equal populations of mosquitos and volunteers.  (If you're looking for a place to volunteer in Haiti, look no further!)   I arrived a few days after the others, and on my first day, we drove as far as we could, and then began to hike into the camp. I was astounded at what I saw. Tent after tent. Tarp after tarp. Endless muddy aisles and paths. Chickens and pigs and goats. Naked children. Unemployed men. People cooking, smoking, laughing, and selling mangos from baskets on their heads. Tent after tent. Filled with families. And did I mention the mud? And the tents?   My wife and I had visited Haiti previously. We traveled around the country a couple of months prior to the quake to do some fact-finding about schools we were raising money for that were funded by The Mona Foundation. And this is the thing about Haiti that always gets me: the people. Haitians can be hard to read when you first get there. Generally speaking, they keep their emotions in check. But as soon as you greet them with a smile or a "BonJou," they open up with loving, radiant hearts and big, big smiles. As a culture, they are the warmest I've ever known. Their arts are breathtaking, and they have a passion for education like I've never seen.   Back to the "community center": I gathered the girls around in a circle as best we could, and we began by clapping around the circle. "Pass the Clap," the game is called. Everyone, especially me, was a bit self-conscious. My goal was simply to get them playing together. When you start to play together, you start to trust each other, and then the participants can really start to open up in surprising ways. The clap started to get faster and faster, it changed directions a few times, and then everything fell apart, as it always does, in gales of laughter. 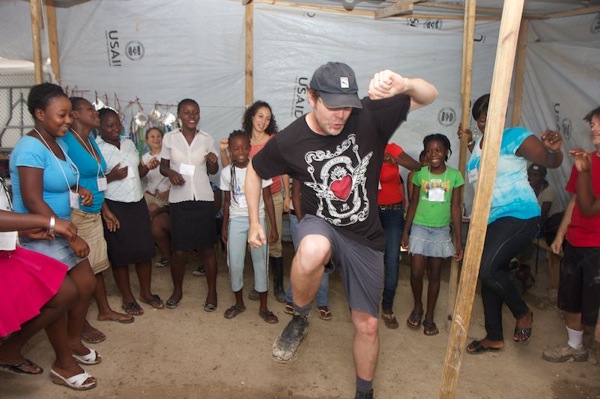 Before I was a mid-level, B-list TV celebrity, I was a theatre actor and teacher. I taught scene study and used improv and theatre games as a way into the play.  After all, "plays" happen because you're "playing," right?  (That's what I used to tell my students, at least.) You're just deeply pretending, just like kids do when they pretend to be Mario and Luigi or Space Alien vs. Vampire.   So we played for a week, me and our rag-tag team, and these beautiful, courageous girls who lived in tents. We sang and danced and shared and made fools of ourselves.

We had a brilliant group of teachers with us. Besides my wife, writer Holiday Reinhorn, we had Kathryn Adams, an art therapist and trauma counselor; Nadia Todres, a photographer; John Paul Thornton, a visual arts teacher; and Valerie Velasquez. 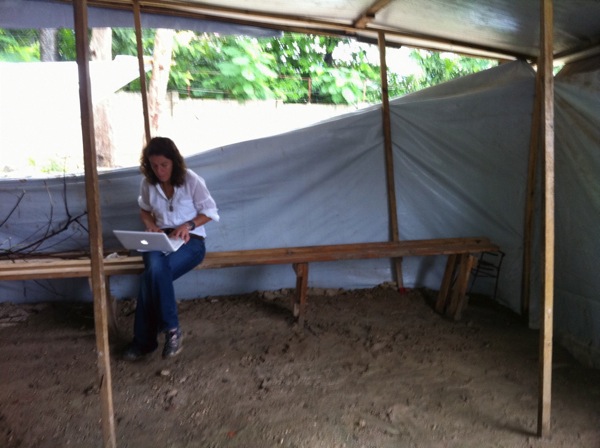 I don't have the time or space to document everything I saw, experienced, and learned from my time with the girls, but I will say that as soon as the games moved to sound and movement and singing, the students excelled. Our goal was transformation, and I would say that we reached it. The girls wrote poetry and essays, did photo collages of their lives, and created beautiful arts and crafts from yarn and sticks and fabric and paint. The final exhibit was a wonder. We transformed that "community center." We sang and danced and read poetry and ate cake with the beautiful smiles of our new friends all around us.   I felt a bit weird knowing that what everyone there
really
needed were homes and jobs and education, not theatre games and photography and poetry. But I think what the arts do is intangible but crucial. It gives life, breath, healing, confidence, and a sense of community. And it's a hell of a lot of fun. I was moved by what the act of creating art was able to bring to our giant tent filled with misfits: a radiant vitality. 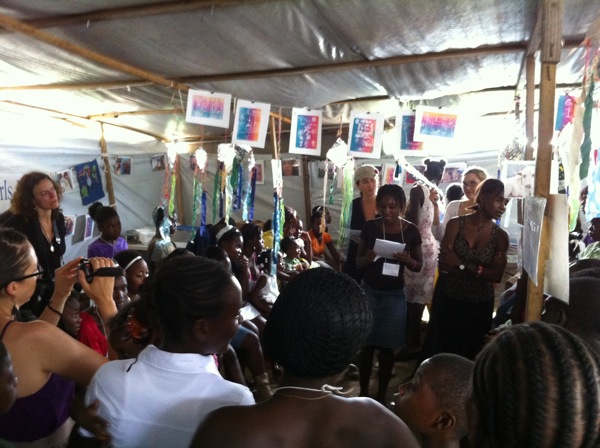 I hope to cross paths with our students again, and I'm sure I will. They were all brilliant in their particular way, and for Haiti to transform itself will require these mighty women.   The program continued on after we left, with Kathryn Adams, our fearless leader, and some folks from J/P, taking over and continuing the teaching work.

Now, I'm no humanitarian. I'm just an actor who did a workshop. But I keep thinking about that word "humanitarian." It means "caring for the human welfare." I would hope that our species is that, regardless of profession, we can all become humanitarians. That's the way to transform the "community center" of our ailing planet.