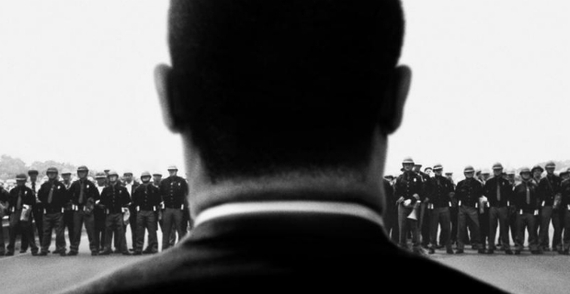 British actor David Oyelowo plays Dr. Martin Luther King in director Ava DuVernay's new film Selma, the story of Dr. King's march from Selma, Alabama to the state capital in Montgomery, on behalf of the right to vote. At the time, black citizens were denied the right to vote in the South through impossible "literacy tests" and poll taxes.

Oyelowo spoke to me about the importance of showing the audience the man Dr. King was in private as well as his public appearances.

For me as an actor, you can't take anything, any of those scenes, any of who he was in isolation. When we think of Dr. King, those are the things that flash through our heads -- we think of speeches, we think of him talking to presidents, we think of him talking to the press. And so even though those scenes were important to me, they were always being thought of by me through the lens of how are they going to be juxtaposed? So in a scene with Lyndon Johnson [played by Tom Wilkinson], I have so much I want to say. I want to think of how that juxtaposes with the scene with my wife where I don't have the words, where I don't have a strategy, where to be perfectly honest, I have less mental capacity to engage with what's going on in the home and so therefore I've run out of resources to deal with what's going on at home. So in many ways the robustness, the strategy, the tactician that you see in front of LBJ shows one side of him. And the ferocity, the degree of cajoling, the degree of at times dampening himself down. You see that more clearly because of what we learn in the more private moments.

While the movie focuses only on a few weeks in Dr. King's life, Oyelowo found a way to show Dr. King's views and tactics evolving.

One of the things I really loved was the progression of these scenes with LBJ. As King, I come in initially, very amenable, almost curtailing myself because I know I am politic as well and I'm there to try to get something. And before I know it, it's not quite the answers I am looking for. That relationship matures over time.

You can see that over the three scenes together. We look to them as a gradation, as a progression in a sense where you see the man maturing.

What meant the most to him was being able to create a full-scale character through Dr. King's interactions with a wide range of people from his wife, Coretta Scott King (Carmen Ejogo, who also played Mrs. King in the superb film Boycott) to the President of the United States and to a young college student named John Lewis (Stephan James), who will go on not just to vote but to run for office and serve in Congress.

What I really gain satisfaction from is watching the film, seeing those scenes juxtaposed with the same guy in a car with a young John Lewis pushing and with LBJ not budging, feeling this is just not working. I went in there and gave it my all and this young man is quoting me back to me saying, "Fear not, we've come so far to turn back now." That's what you're looking for an actor is that layering that enables you to go big in certain scenes and then go really small in others.

In Selma, we see the most private moments of Dr. King with his wife, their relationship strained by his activism and the risks he is taking, and by tapes the FBI sent to Mrs. King revealing her husband's affairs. Oyelowo explained why those scenes were "a gift" to him as an actor.

It started with Ava really. I mean the original incarnation of the script didn't have that. Literally I only had a phone call with her character, there was no face time at all. I think this is one of the beauties, one of the benefits of having a female director who comes at it with a different perspective, a layered perspective. A perspective on how important it is to show that relationship that a white man wouldn't necessarily come at it with which is what the original writer is. Those scenes were just a gift to an actor, a gift to the audience. That scene has come up time and again as one of people's favorite scenes. And I think not only is it an opportunity to see behind the veil, but it is an opportunity to see themselves. So many men in particular see that. Isn't it ironic that it takes a woman to show us men who we are? So many men watch that and go "Ooh! I felt that scene."

You can feel a little silent rumble go through the audience at that point. And that is a reaction you are very likely not to get in the usual bio pics. You tend to not be going, "Oh yes I know what it feels like to be that great man or that great woman." Well in that scene, you do and that is what this film does I think so beautifully -- to humanize these people, to make you see yourself in these people. I truly believe we go to the movies to see ourselves and I think that's why you walk away seeing this man as even greater than you may have perceived him to be before because he is you and yet he did it anyway.