In December 2014, Travel + Leisure magazine listed Haiti as one of the "Best Places to Travel in 2015." Wow! That really made my day. I forwarded the link to a bunch of people I know, while trying very hard not to pepper my note with multiple exclamation points. Good news about Haiti, while common to those who follow the country's progress since the earthquake, is rare. Why? Tragedy, wretchedness and insurmountable problems make for sexier headlines. Only 10 people killed in that quake? Who cares? Over 250,000 dead bodies, with 300,000 injured; now that's something!

But, at the risk of putting readers to sleep, I must now report another rather astounding piece of news about Haiti's blooming renaissance. The country now boasts the internationally-recognized, championship-winning Haiti Polo team, along with the construction of a five-star, full-service polo resort, school and spa in Côte De Fer, on Haiti's south-eastern coast.

Polo? You're thinking. In Haiti? What in the world? Come on, admit it. You're thinking that what Haiti needs is education, not polo, right? As I mentioned, there are too-many-to-count progressive initiatives currently targeting the island's many ills. A multi-pronged approach is what's needed. The "sport of kings," as polo is sometimes referred to, was once a part of Haiti's social landscape in the 20s and 30s. What's wrong with now? Tennis, another "elitist" sport, has been around forever in Haiti. 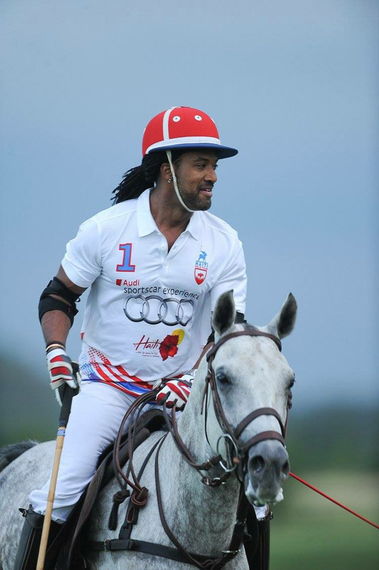 The impressive Haiti Polo team*, conceived and spearheaded by captain Claude-Alix Bertrand --recently appointed Ambassador UNESCO of Goodwill-at-Large for Haiti by Haitian President Michel Martelly -- has scored a win in the finals against the U.S. in the San Francisco International Polo Classic. The team also made headlines with championship wins at the China Open Polo Tournament in Shanghai; the Cordoba International Polo tournament in Cordoba, Argentina; and at the International Masters Cup in Pilar, Argentina. Team Haiti's presenting sponsor is Audi Sportscar Experience. Other sponsors include Duty Free America and Digicel; and it also has a healthy working relationship with the ministry of tourism in Haiti led by Stéphanie Balmir Villedrouin. The 8000-acre polo resort complex will also offer golf, sailing and Formula One car racing, in addition to polo lessons to young Haitians, and anyone else wanting to learn. In the process, the project will generate 18,000 jobs in Haiti. Not bad, eh?

Sports and the arts speak to the culture of a place. For 24 years I have represented Haitian artists through my gallery in Hollywood, California, and have previously written on HuffPost about Haiti's distinctive arts tradition as one of the most potent local forces we can harness to bring tourism and culture enthusiasts back to Haiti. A project now playing at my house is my sculptor husband Pascal Giacomini's documentary-in-progress on the remarkable and feverish artistic production pouring out of Haiti before, during and after the seism that changed everything. Currently on view at the Grand Palais in Paris is a major traveling exhibition titled Haiti, Two Centuries of Artistic Creation. This nation of artists has some of the best beaches on the planet; its French-influenced cuisine is downright gourmet. The sport of polo already exists on many islands in the Caribbean; but soon, Haiti will be the only place where the sport of polo will be available on a grand scale, without the customary club membership requirement. How fabulous.

* Fernando Cordoba, Francisco Pizarro and Juan Pizarro are the other professional polo players who make up the Haiti Polo team.