If you're a Quicken user, you probably know that unless you upgrade at least once every three years, you'll be cut off from all online services -- such as bill paying, and downloading banking or credit card transactions -- by April 30 of the third year. If you didn't already know, welcome to the club.

Quicken calls this its Discontinuation Policy. Angry users have called it plenty of other things that are unprintable here.

To upgrade or not to upgrade
Why wouldn't you upgrade Quicken every year?

As a longtime Quicken user, I used to do that. But a few years ago, I began to question whether each new version's bells and whistles, many of which I didn't need, were worth the price. Then there were the changes Intuit had made to the program's user interface over the years that forced me to change my habits every 12 months. (I hate changing my habits.) Not to mention the possibility -- often a reality -- of bugs cropping up in each new version.

Considering all that, a few years ago I started upgrading every other year. Last year, after checking out the new features and the user reviews for Quicken 2014 on Amazon (users gave it roughly three stars out of five), I decided to hold out for a third and final year. When Quicken 2015 was introduced last fall, there were the usual improvements to the Windows version, while the user reviews on Amazon seemed, on the whole, similar to the previous year's. Had it not been for the Discontinuation Policy, I would have passed on this version and waited for Quicken 2016.

Since I rarely buy a new version of any software until it has been on the market for a few months (enough time for the most serious bugs to have been fixed), I bided my time by checking into the remaining alternatives to Quicken. (The product's biggest competitor, Microsoft Money, had been discontinued in 2009).

My interest was mainly in paying bills, budgeting, and preparing for tax time. No product that I found on my own seemed to suit my needs. You may find one you like, though: For detailed reviews of some major alternatives to Quicken, see TopTenReviews

Meanwhile, the clock had continued ticking. 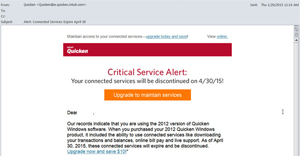 Soon I began receiving emails like this one from Quicken's maker, Intuit, warning me of the impending doom awaiting the online capability of my copy of Quicken 2012. (To be fair, Quicken does not totally disable old versions. Even if I didn't upgrade, I would still be able to continue using Quicken 2012 indefinitely to balance my checkbook, budget, etc. However, my version would be cut off from all online services and support). 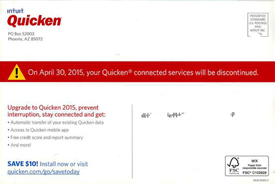 Intuit sent this postcard to my house in early 2015, offering a $10 discount. I didn't bite. As in earlier years, I had found lower prices for Quicken at retailers -- even allowing for the $10 discount -- than if I bought directly from Intuit. For example, as I write this, Amazon is offering Quicken 2015 Deluxe for $42.41 and Staples for $44.99, while the Quicken site lists its discounted price at $64.99.

Quicken yields
Despite all my reservations, I was planning to upgrade to Quicken 2015 before April 30. But I had decided to hold out until late March, so that I could first finish preparing my taxes using Quicken 2012. It's never a good idea to upgrade a piece of software just before using it for an important job.

But then a funny thing happened.
Quicken blinked. 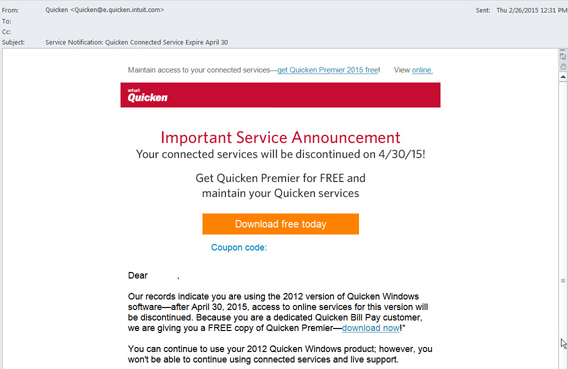 On February 26 -- two months before the cutoff -- I received this email in which Intuit offered a free upgrade to Quicken Premier 2015, a "$104.99 value." The reason for Intuit's cave is right there in the first paragraph: "Because you are a dedicated Quicken Bill Pay customer."

Of course I was a dedicated Quicken Bill Pay customer! For who-knows-how-long I had paid Intuit nearly $120 per year to pay my bills online. Intuit's new offer made perfect sense: The company so dreaded losing my business as a Bill Pay customer -- which would happen if it cut off my online services -- that it was willing to offer the upgrade free.

This answered a question about Intuit's business practices that had bugged me: Why would any company bite the hand that feeds it by cutting off a customer from a lucrative online service? Now I had my answer: They wouldn't.

Playing Quicken Chicken
It also helped me realize that I had been unwittingly playing a game that I now call Quicken Chicken. If you'd like to avoid losing your online services without having to pony up for a Quicken upgrade after three years, you should try playing it, too. 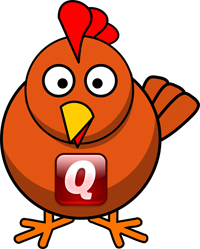 As with the classic game of chicken, in Quicken Chicken both contestants must be at risk. You're already at risk. The trick is to put Intuit at enough risk that it will fold before you do. First, you need to be, or become, a Quicken Bill Pay customer. Then hold off on buying a third-year upgrade for as long as you can, certainly long enough to have prepared your taxes for the new year. (This also gives Intuit time to fix bugs in the new version.)

In my case, I believe, Intuit was itself holding out so as to get as many paid upgrades as possible before it caved by offering the freebie. Apparently the company had figured that by late February, the risk of losing Bill Pay income finally outweighed any benefit from further pressuring the remaining holdouts to pay.

Challenging Intuit to a game of Quicken Chicken may not work for you. But it's worth a try. Once this report is published and the word is out, Intuit may change its strategy. But I still think that the longer you hold out -- even until early April if you can -- the better your chances of being offered a free upgrade.

If Intuit wants to spare its Bill Pay customers this triennial headache, it ought to eliminate the annual upgrade fee altogether for them.

Quicken's Discontinuation Policy is just one more example of the tech industry's disrespect for consumers that I cover regularly on my blog. If you've been offered the same free upgrade that I was, or even if you haven't, let other users know by posting a comment below. The more that consumers know about the tech industry's practices, the better.