Before me, in the glass vitrine on a glass shelf, the metal tea set I pined for during my childhood, yellow and blue plaid tea cups and saucers and a tea pot with matching dainty cookie plates, and a serving tray, depicting a playful elephant serving tea to a grateful mouse. I had spent endless hours fondling them at my local F.W. Woolworth & Co. in Long Beach, New York, never quite managing to come up with the nickels and dimes from my allowance needed to bring the set home.

Now, the tea set was in a place of honor in the Senator John Heinz History Center's Toys of the 50s, 60s and 70s exhibit, the spotlight bouncing off of its shiny surfaces. When I read the wall text, I was surprised to learn that its manufacturer, J. Chein was a maker of mechanical toys and banks in the 1930s who switched over to making metal bomb casing during WWII, and who, after the war, settled on producing lithographed tin toys.

There were many other surprises in this exhibit of nearly 500 favorites developed in partnership with the Minnesota Historical Society. For those of you who destroyed or failed to hold on to your childhood treasures, the 8,000 square-foot exhibit may well be worth the trip to Pittsburgh. Your head will be swiveling as Mr. Potato Head, Gumby, Barbie, and action figures from three decades vie for your attention.

Arranged by decades, each paired with a fully furnished living room set up with a couch that can actually be sat on, the exhibit opens by tracing toys from the 50s--a Junior Miss Sewing kit (in those days, toys for girls were truly domestic), and American Flyer trains by A.C. Gilbert (intended for boys). There's a moving note from one train owner, Richard Klick, a truck sales manager, who recalled that his parents, who were of modest means, told him at Christmas time, to ask for the one present you want "as if it is the only present you will ever receive for the rest of your life." Klick got his American Flyer trains.

The arrival of TV changed everything. After the Mickey Mouse Club debuted on national TV in October 1955, Mickey Mouse memorabilia began to fill the toy stores. On display in the show, a Mouse Getar by Mattel.

Barbie (Barbie Millicent Roberts) debuted in March 1959. More than 350,000 dolls were sold during the first year of production. Although immediately popular, there was criticism, of the supermodel's "steroid proportions." Creator Ruth Handler was quick to defend her doll: "My whole philosophy of Barbie was that through the doll, the little girl could be anything she wanted to be. Barbie always represented the fact that a woman has choices." I laughed after reading the wall text, remembering how tricky it was to squeeze Barbie's size C/D chest into her red-and-white striped halter top.

I remembered the Easy Bake Over by Kenner (1963), the oven baking light just hot enough to produce a slightly mushy baked circle of a cake. My grandmother would never have let it enter her kitchen but I did get to play with it down the street at the house of friends.

One toy that I did play with was Mr. Potato Head by Hasbro which came out in 1952. It was the creation of George Lerner who tried to pitch it to the company as early as 1949 with no luck. At the time, he envisioned using real potatoes, a waste of food to the post war generation. Eventually, though, Lerner sold the idea to Merrill Hassenfeld, son of Henry Hassenfeld, a founder of this company that became Hasbro. From my family history in Providence, RI, I knew all about the Hassenfelds since my great grandmother, Lena Hassenfeld was Henry Hassenfeld's sister. Our families had once been in the pencil manufacturing business together before we left for New York and the Hassenfeld clan went on to fame, making millions as the toymaker Hasbro.

There were Lincoln Logs by Playskool and Tinker Toys, made by A.G. Spalding. I remember the cylindrical container that the Tinker Toys came in, with its embossed metal lid. The original wooden sticks were unpainted but over the years they became multi-colored. One feature that did not change, the wall text said, was the instruction booklet that came with the set (the one I did not read) which "never included weapon design." Two other 60s favorites were Lite Brite by Hasbro and Etch A Sketch made by the Ohio Toy Company. Both ended up in my attic, rediscovered by my children and grandchildren.

Monsters, superheroes and villains filled the space, less interesting to me but magnetically drawing crowds around the exhibits. There was an Evil Knievel action figure, made by Ideal (1973) and Baby Brother Tenderlove by Mattel (1973), the company's first anatomically correct male doll which changed the doll industry forever.

As one entered the 70s, there was a cut velvet couch with polka dot throw pillows and a vibrant patterned red rug, oriented to the TV. Above the set, the words, God Bless Our Home. Beyond the room, the designers had situated a play area. At the time I visited, adults were sitting there playing games. On the wall above them was a quotation from Plato: "You can discover more about a person in an hour of play than in a year of conversation."

Just before the vintage video arcade and pinball gallery where you can spend your coins flipping the flippers, I spied two friends from an earlier moment, Slinky, invented by mechanical engineer Richard James in the late 1960s and Cootie, created by Herb Schaper in 1950 and first sold by Minneapolis based Dayton's Department Store. I was struck by the familiar sound of Slinkys swooshing as visitors raced their Slinkys down a staircase.

Iconic toys, all here for visitors to ogle and some to touch. Nothing is forgotten in this colorful, playful, and thoughtful exhibit. 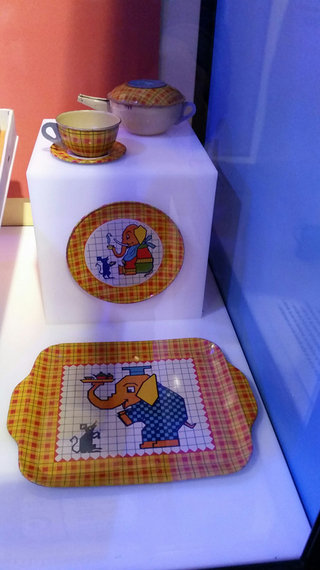 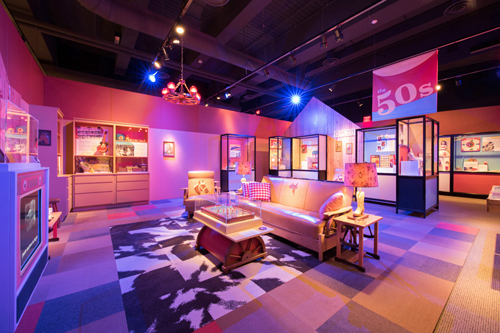 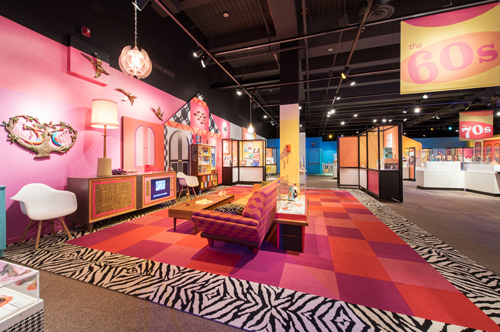 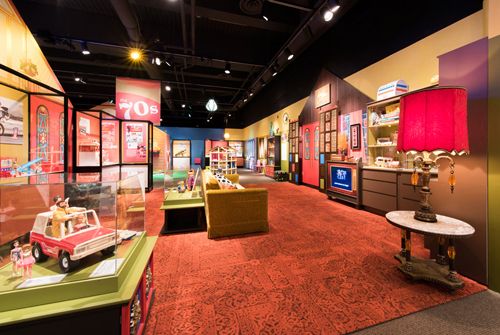 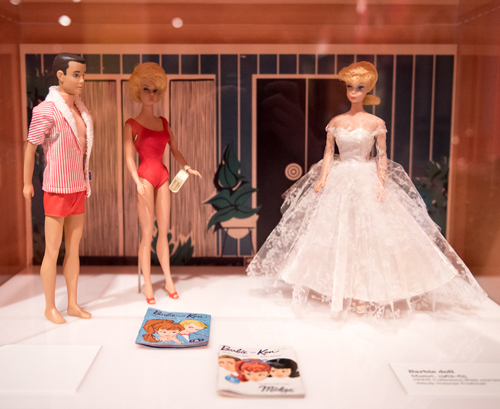 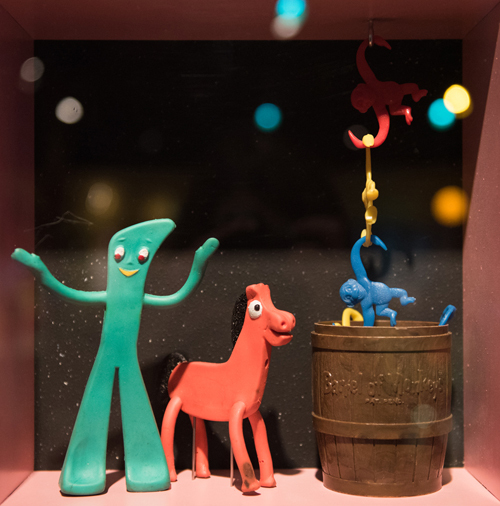 Gumby and Pokey (Photo courtesy of the Minnesota History Center) 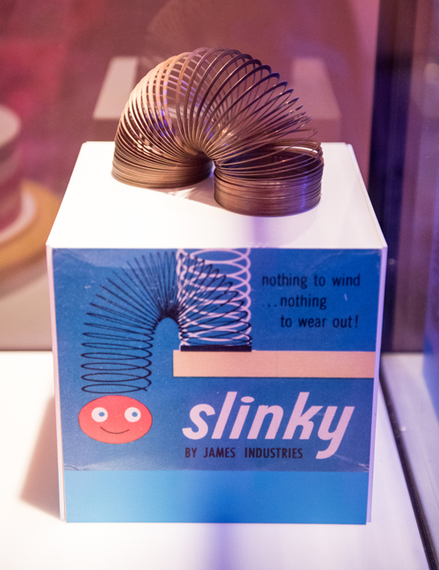