Anti-gun advocates in the U.K. are calling a Playmobil set, sold at Toys R Us, "horrendous" because it features a bank robber character that comes equipped with a tiny handgun.

Danny Bryan, chairman of Communities Against Gun and Knife Crime, told U.K. paper The Mirror, that Playmobil's "Bank and Safe set" is not sending children the right message.

“We don’t want to be encouraging young people to look at these sorts of things. I think it is horrendous that young people are given all these images to shape them," he told the paper. “I wonder what is going on. It is sending out the wrong message.”

The toyset, which costs £34.99 in the U.K. and $49.99 in the U.S. and is aimed at children ages 4 to 10, includes a bank setting and a blonde-haired doll, who wears dark sunglasses to shield her identity so she can hold up the bank manager as he hands over cash and gold. The set also includes a bag for the robber to stash her cash in, as well as tools to break open the toy-sized ATM.

The Daily Mail notes that the company's description of the set reads, "Watch out. The bank robber is after all the money in the bank and is demanding the key to the safe -- what will the bank manager do?"

"The Bank and Safe set" is part of Playmobil's "City Action" collection, which also includes fire, police and hospital playsets. The German-based toy company has spent more than three decades producing detailed worlds for its 3-inch-tall plastic dolls to live in -- worlds that include everything from country farms, to spaceships, to a prehistoric setting with cavemen families and Wooly Mamoths.

Anti-gun advocates might be outraged, but some of Playmobil's toys have included miniature weapons, including handguns, for years. The Western-themed "Outlaw Hideout" set, for example, includes three dolls on the run from the police and equips them with two rifles and a handgun.

This isn't the first time Playmobil's unwavering attention to detail has landed it in hot water. In the past, parents and advocates have voiced concerns over a number of playsets, including the "Playmobil Security Check Point," which included armed airport security officers, a metal detector and an X-ray screening machine. 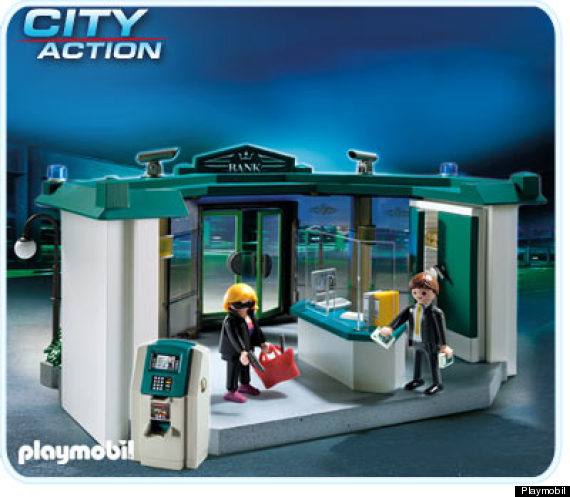 CORRECTION: An earlier version of this article stated in the past parents had been concerned with a Playmobil Wine Bar playset, no such playset has ever existed.