Our Fourth of July kicked off like a Kurt Vonnegut novel. Small town reactionaries answering to a bullhorn chant of "When I say constitution, you yell revolution." Constitution. Revolution. Constitution. Revolution . . . I don't know what to call it but the Convolution Party aired its brand new platform on the steps of a Land of Lincoln courthouse, some in their Glenn Beck Live Free or Die shirts.

The first speaker read from a list of talking points that markedly coincided with the more comprehensible parts of Sarah Palin's resignation speech including promoting big oil and creationism. Dozens of huddled masses clustered under their giant golf umbrellas in the rain. The creator sent rain, or they may have whipped out muskets. One of their local web site tea party activities is target practice with guns purchased after the election. This Fourth of July at our courthouse museum there was no mention of the Illinois Senator who went on to the presidency, Abraham Lincoln, while bullhorns blared over his statue.

At the end of the celebration, if angry shouting constitutes a celebration, it was announced that they plan to rally across the country on September 12th to fondly remember how patriotic the country was the day after the Twin Towers fell. To fondly remember that day. Anyone who suffered though September 11th is going to have to watch the Beck/Palin Convolution Party politicize their loss. Just like Bush did with the preemptive attack on a country that did not attack us, no matter what Cheney used to say. It took more than 4,000 American lives lost for the Convolutionists to realize that they were duped. Imagine how long it's going to take them to realize that Jefferson, Paine and Lincoln were agnostic progressives.

The first speaker, blessed with very little god-given eloquence, handed the microphone over to an apparent British Convolutionist who started the crowd chanting that America is the best country in the world. Which makes him the least patriotic British citizen in the world. On the 4th of July, random British guy then moved on to what truly united this fringe element: Nothing is or has ever been America's fault. He shouted that in any disaster around the world, everyone hopes that America will come to save them. Notwithstanding the invasion of Iraq on trumped up intelligence, that's also a hard sell when you're from New Orleans where Donald Rumsfeld waited for four days to deliver water to Americans stranded at the Convention Center. This was going to be our Fourth of July to celebrate freedom from 8 years of the Bush fiasco, but the turncoat redcoat across the street dampened that hope.

Next, a GOP politician's spokesman started speechifying, but most of the crowd left after the Simon Cowell of Convolutionaries was finished. In a pale effort to legally qualify for a public forum at a historic landmark on a national holiday, the last speaker mentioned that citizens could get involved with either party -- Republican or Libertarian. The crowd was also told not to get their information on television, prepare to be mocked and read some special books. They were exhorted to "Go home and watch Glenn Beck," so it's clear whose book sales stand to gain from all this tomfoolery.

The Convolution Party seems to consist of the same neo con men who took over the GOP in the Moral Majority and Bush years. The chickenhawks who brought their, "Who would Jesus torture?" mentality to diplomacy are now giddy with apocalyptic predictions. The speculation Beck is spinning is that Palin has some

From his breathy posts, Beck touts Palin as practically representing the fourth horseman of the apocalypse with Beck himself chomping on honey coated books about the end of days. Revelations meets Revolutionary War Revisionism. And just because these people are comically wrong on history and patriotism, does not mean they didn't spoil everyone's 4th of July.

Glenn Beck spent the 4th of July at a flag burning / retirement ceremony in Utah with groups of participants at the stadium dressed 18th Century style for their own convoluted reasons. Sort of a 'come for the bile, stay for the leggings' theme. Then the Jonas Brothers performed and the whole shebang was called Stadium of Flames. The Utah location would indicate that it's step one in Beck's backing of a new Palin / Romney Convolution Party. He lifted his new book's name directly from Thomas Paine's pamphlet, ignoring the fact that PaIne was famously agnostic and persecuted for those beliefs. But the tea bagging Convolutionists aren't going to find this out while they're retweeting Beck's cryptic instructions. Their new motto is, "We Surround You" which is so Zombie-like, apparently even Karl Rove isn't writing wingnut slogans anymore.

It's more bothersome than amusing when the Convolution Party lands on your front doorstep, trying to thwart one of the few holidays founded by progressives. Next they'll take over solstice and call a halt to the change of seasons. How did the day wind down? With the words "There Ain't No Doubt I Love This Land" blasting from a boombox. Which is a double negative, so there is indeed doubt they love this land. Finally, they played the Star Spangled Banner but unplugged the boombox before it was done, bagged up the flags and drove their trucks home. Even Abraham Lincoln wouldn't want this crowd to not secede after blocking his statue, revising history, depressing progressives and ruining our post-Palin resignation glow.

So here's a note to the new Convolution Party leaders: I get it, the Republican Party was founded here and you're jumping from the same springboard. But Lincoln's party was founded on not splitting the union and your new endeavor is founded on the opposite. We'll probably vote to let you go if your heart is set on seceding. For starters, take Texas and its secession-happy governor. Take Sanford, Palin, Jindal -- fill the Convolution State of America with all the wingnut governors, elderly Beck viewers you've hoodwinked, kids you dazzled at the Stadium of Fire, insurance, banking, big oil and weapons lobbyists and random neocons now gathering dust in the closet. And Fox News. Then go away. Because cynical politicization of July 4th or September 12th is not what America was founded on. Neither is an August 30th rally to celebrate how our country felt the day after Hurricane Katrina hit, in case you're wondering.

Our majority has elected the Senator from Illinois, Barack Obama, as President of the United States whether or not that is acknowledged by whatever you end up naming your party. This is the beginning of the end of an age of ignorance. And that's something to celebrate on the 5th of July, the 6th of July and every day for the rest of the year. 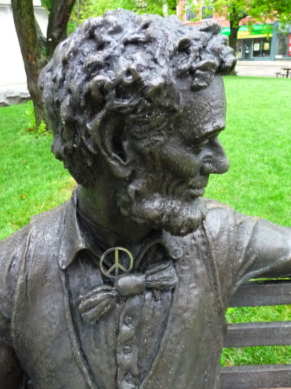 Lincoln in a peace sign. Happy Every Day After the 4th of July. 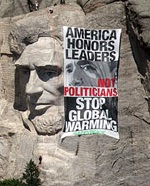 Update: Greenpeace likes to dress up Lincoln, too!