The stars came out Saturday night in Los Angeles -- not for another superfluous awards ceremony, but rather to watch a comic icon perform. "Mr. Warmth," Don Rickles, played the Saban Theatre in Beverly Hills, his first stand-up performance in 17 years, in the city, in which his career first began. 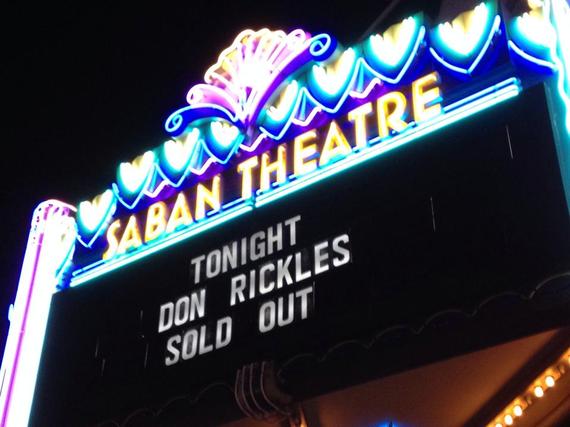 Ryan Gosling and Eva Mendes were there, as were Bob Newhart, Bob Saget, Brad Grey and Jason Alexander. I've probably seen Rickles perform a dozen times now -- from classic showrooms in Las Vegas to concert halls in Clearwater, Florida. If you're unfamiliar with Don Rickles's stand-up career, you should immediately head to YouTube. Do not pass go. At 88 years young, Rickles is the last remaining entertainer alive from "The Rat Pack" era. He told the sold out audience Saturday night, "The museum called. They want me."

Rickles was buddies with Frank Sinatra, who affectionally called him "Bullet Head." Rickles was the only guy who could insult Frank and live to tell about it. The two were an unlikely pairing -- an Italian from Hoboken, New Jersey and a Jew from Jackson Heights, Queens "or as it's known today, Haiti." Rickles chirped on Saturday. Sinatra and Rickles became fast friends, largely because of their loving mothers. Rickles's mother met Sinatra's, and asked her if she could get Frank to come see her then, struggling, son perform in Miami Beach. Sinatra showed up with some tough guys and Rickles made them laugh. And that was that.

Rickles acted alongside legends, Clark Gable, Burt Lancaster and Robert De Niro. He was a regular on The Tonight Show with Johnny Carson Show and continues today on the late night circuit, yukking it up with Letterman, Kimmel and Fallon. Many kids know him as the voice of "Mr. Potato Head" from the animated Toy Story films.

Another name that stuck with Rickles is "The Hockey Puck." People line up just to hear The Puck insult them. I recall his brilliant guest appearance on The Larry Sanders Show, where a writer stopped Rickles in the hall to ask him if he wouldn't mind insulting him. You know you've made it, when Rickles rips on you. Rickles made it cool to be made fun of.

"Laughter with love" is how Rickles describes his humor. The "Merchant of Venom" understands, more than most, that we need to be able to laugh at everything. He boasts how he survived "getting his can shot off" in the Navy, in the Philippines. Even a recent prolonged leg infection, which leaves him barely able to walk today, has not stopped him from making us laugh. He performed the majority of the night, seated, from a chair -- but, still managed to sing, dance and spew glorious venom at those lucky enough to score front seats. He picked off one guy's female companion for her lack of looks, "The only time you can make love to her is on Halloween." Another guy was chided for being "a fag" -- because he worked as a "personal assistant." Rickles goes after them all.

For 50 years, the act has not changed. And for that, we should all be grateful. For the man who insults us, also loves us.

Loyal disciple of The Boss, Hank Moody and Larry David