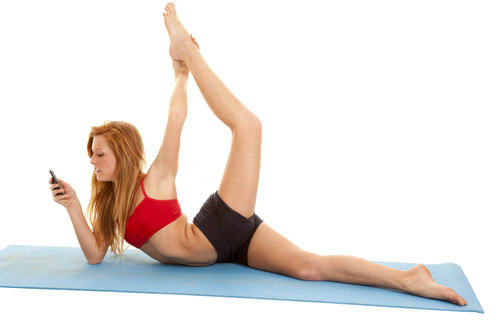 There are all kinds of yoga these days.
Vinyasa. Ashtanga. Hatha.

And then, there's a new one that I've discovered...

Yes, Type A-ness (which does sound quite naughty when you say it out loud) has gone beyond the corporate world and into the yoga world, one that I had assumed was supposed to be Zen.

If you've never been in a Type A yoga class, you're lucky. You haven't had to deal with the women (yes, it's mostly women) who push you out of the way as they race into the classroom to claim their favorite space to set up their yoga mat, move your mat into a less-desirable space while you're in the restroom (I'll never pee again before class), check their texts or answer their phones in between doing downward facing dogs, or roll their eyes at you while they're doing their spinal twist one way and you happen to be twisting the other.

It's not just the students, either. Sometimes, you get a Type A yoga teacher. There was the teacher who spent the first 15 minutes of class alternately scolding and lecturing us on the proper way to fold and store our blankets and yoga mats perfectly on the shelves after class. And the teacher who was so frustrated with a friend of mine that she actually yanked her by the hair to force her into a yoga posture.

I initially came to yoga to get rid of my Type A-ness. I thought that by doing some special breathing and forcing my body in yoga postures, known as asanas, I would feel more relaxed and could de-stress. Instead, I found that it had the opposite effect. Surrounded by other Type A-nessers, I discovered a strange kind of competitive kinship, one that fueled me in the business world, but not so much on the yoga mat. Eyeing the other women who so easily folded themselves in half or wrapped their arms and legs in positions that I thought only existed in the Kama Sutra, I felt a surge of competitiveness to do the same. So I held my breath and crammed my body into postures that my body really could not, nor should not have been doing. The only one who ultimately benefitted from my competitive yoga practice was my chiropractor Ray, whose office I limped into regularly.

Then one day, something happened. As I was binding my thighs tightly together with a yoga strap and hobbling into a downward dog, the teacher instructed us to jump forward. My brain had no idea how this was physically possible and apparently, neither did my body. I willed my body to jump, and instead, I toppled forward onto my face. But instead of feeling embarrassed or determined to do it again, I started laughing. And ever since that day, something shifted. I rediscovered my sense of humor. Which surprisingly turned out to be the key to my finding that spiritual, de-stressing, uplifting yoga experience that I'd craved all along.

Here are some tips for overcoming your Type A-ness in yoga class:

My apologies for being so crass, but it had to be said. In fact, I wish someone had said it to me when my Type A-ness emerged towards the end of all of my first yoga classes.

For those of you who might not know, at the end of every yoga class, students typically take a final resting pose, called "savasana." Also known as "corpse pose," savasana allows you to lie down on your back and relax. The purpose of savasana is to allow the body to experience deep relaxation and to allow the mind and body to assimilate the yoga poses from class.

Yet, many Type A yogis think that savasana is a complete waste of time and that its sole purpose is to allow them to make a lot of noise while packing up their yoga gear and stepping over other people's bodies who are trying to relax, so that they can leave class a whole five minutes early to check their texts.

So here's my advice. Lie down. Be quiet. Close your eyes and breath. You, more than anyone, need to do this. You might even come to like it. I know I did. Think of it as your reward for making it through class. Even if you don't do it for yourself, then please do it for your fellow classmates ☺

So what if some woman's Lululemon-clad butt looks better than yours, or if some other woman can wrap her legs around her neck? It doesn't mean you should think less of yourself. In the words of the beloved and recently departed yoga master B.K.S. Iyengar, "Do not look at others' bodies with envy or with superiority ... Never compare with others." Yoga is about reaching a point of acceptance -- in others and in yourself. So, the next time you're tempted to judge yourself, close your eyes, take a breath and focus your attention on yourself and just how awesome you are.

Become a "Recovering Perfectionist." That's what Shannah Green, yoga instructor and founder of The Yoga Room in Nantucket, Massachusetts calls herself. Yoga taught her to accept and embrace her vulnerabilities and "imperfections." In an interview with Shannah, she said:

The competition in yoga stems from the overemphasis of the 'physical' practice, mastering asanas in some classes/studios. Unfortunately, it comes down to a choice -- either teaching to the tradition of yoga or teaching to the masses who want a workout. A teacher/studio must decide what that is, and then teach and uphold that vision no matter what. There are so few 'true' yoga studios out there that are willing to teach the essence because it is not an easy sell. People want an easy fix, the magic bullet.

Can you achieve a great workout in a yoga class? Yes. But in order to experience the full benefits of a yoga practice, which include what Shannah refers to as "a spiritual practice of self-realization," you must leave your cardio kick-boxing state of mind back at the gym.

4. Lift something other than your leg

Researchers tested the old adage, "grin and bear it," and found that smiling can reduce the intensity of the body's stress response. My friends and I have found that smiling during yoga class can actually help us get into those challenging yoga postures, perhaps because we're not taking them (or ourselves) so seriously.

5. Remember that yoga is not a competitive sport... with a few exceptions

I maintained the assumption that yoga was never, ever, under any circumstances, to be considered a competitive sport. Much to my surprise, that is not true. There are national and international yoga organizations that promote yoga competitions. One ad has the tag line "Pose Harder" with a women in a Russian split with her chest on the floor and her arms bound behind her (ouch!). My guess is that this sport attracts the kind of woman who is or was a professional dancer/gymnast/Gumby-on-steroids/Olympic-wannabe and whose goal is not to find a relaxing yoga class that promotes inner peace but instead one that helps her channel her Type A-ness into a spirited competitive yoga championship.

For those of you who want to transform your Type A self into a Type A+ in order to enter the world of competitive yoga, or just hold onto your Type A-ness because you like yourself that way, then I will not judge you (a lesson I've learned in yoga class). But as for me, well, I'm going to smile my way through yoga class as I work on transforming myself from a Type A to a Type B.