Right smack in the middle of "Inside Llewyn Davis," Joel and Ethan Coen's ode to New York City's folk music scene of the early 1960s, the audience is introduced to a particularly hokey (yet incredibly catchy) "protest" song titled "Please Mr. Kennedy."

You see, Llewyn Davis (played by Oscar Isaac) is an artist -- a man with refined musical tastes who looks down upon the supposed songwriting talents of Jim Berkey (Justin Timberlake). Well, except when Llewyn finds himself out of money and agrees to play guitar and lend backup vocals to one of Jim's new songs. It happens to be a nonsensical protest song about President Kennedy sending the singer into outer space against his will. With Timberlake's earnest lead vocals, it also happens to be one of the catchiest and most delightful songs released in 2013.

How does a mini-masterpiece of ludicrousness like "Please Mr. Kennedy" even come into existence? Granted, there are a few examples of real "Please Mr. Kennedy" songs that served as an initial inspiration -- here's an example by Mickey Woods -- but something as delightful, weird and musically appealing as what's in the finished film had to come from the combined thought process of a few people. In this case, they were Timberlake, Grammy- and Oscar-winning songwriter and producer T Bone Burnett, the Coen brothers, Driver (who adds his strange, deadpan delivery of a few key phrases as musician Al Cody), and Isaac (who acts genuinely confused about how many "puh puh"s he's supposed to say before every "Please" in the song title).

So, here's the way the song started: It started from that germ and I wrote about 10 of 15 verses in Ogden Nash-style -- because I'm always trying to be Ogden Nash. And Justin and I were going out to Norm's Rare Guitars in the Valley to find a guitar for him. And we went through 20 or 30 guitars where we finally found it. He said, "Let's go write that song." I had the words in my pocket and we went into the office, he took it out and he started singing the melody -- he went right into it. So, that's how that song started. We wrote the melody there, at Norm's Rare Guitars. And then we sent the lyrics back to Ethan and Joel and they edited and refined and changed and rewrote them. 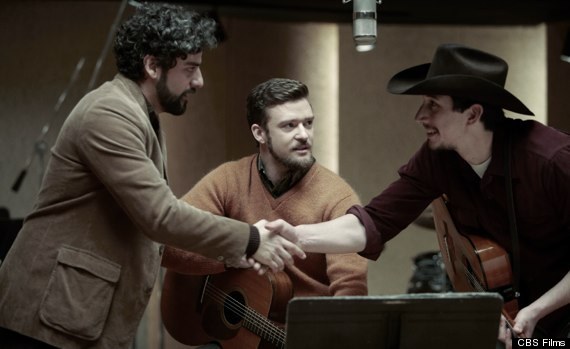 T Bone Burnett: Even though everything was recorded live on set, we did three records so that we would know by the time we got to the set what we were doing.

Adam Driver:: We recorded a song, pre-recorded, before anything was shot. And they were like, "We're not really quite happy with it. It's not really what we want it to be."

T Bone Burnett: All of the verses I think became the amalgam of stuff we had all written. I couldn't say who wrote what now. I sort of wrote the original framework and then Ethan would take the lines he liked and re-rhyme them or re-word them -- things like that -- write a new line or write a new verse. I think we kept throwing it around for a few weeks -- even as we were in the studio recording it.

Adam Driver: We worked on it, then they kept shaping it. So everyone was naturally collaborating. I wish I could say that I was more involved, because the people that were involved, I felt like it's probably best if I just, you know, take a back seat to T Bone Burnett and Justin Timberlake and the Coen brothers and Oscar.

T Bone Burnett: It's not a joke song -- it's dead serious. It's mean to provide levity -- those are the hardest to write, the joke songs.

Oscar Isaac: They push it right to the limit, but no further.

Adam Driver: Yes, usually you would imagine that there would be many stages where people can bail out.

T Bone Burnett Wouldn't that be hilarious? A song about not going off into outer space being a hit? 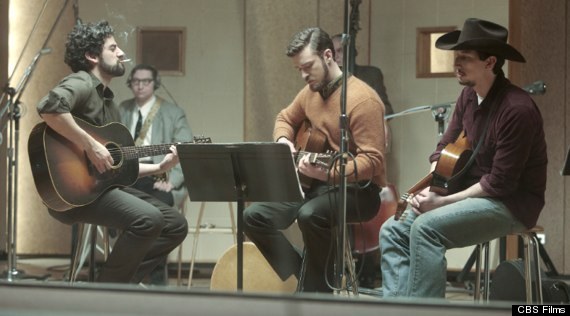 T Bone Burnett: It is a joke song, but here's the thing ... even if a song is supposed to be bad in a film, it still has to be great. Because if you put bad music in a film, it's just bad -- then the film's bad. You can put good music in a film and say it's bad and the audience will believe it's bad, but it will still be good and they will still be entertained by it, even though they're told it's bad. And, on top of it, underneath all of that, it really is great.

Oscar Isaac: That's the thing, I remember that was a piece of direction. Once you commit to doing it, you commit.

T Bone Burnett: We were looking for what Adam was going to do; we didn't have a part for him.

T Bone Burnett: And I did that "Ohh noo!, Ohh yeah!," or whatever -- I started doing a doo-wop, but that's all I did. I did it maybe one time and then he picked that up and then Ethan would say, "Now go 'outer space,'' -- the way Adam read the lines, we would just feed him things and he would take off with them.

Adam Driver: Then even on the day -- it was Ethan or Joel, I can't remember, I think it was Ethan -- he was like, "Maybe you should be like warming up here," where I tried a couple of things. Then they just shaped it. But it was all them.

T Bone Burnett: He is fearless. Adam Driver is not always trying to get on his best side, you know?

Off to the side, Oscar Isaac is expressing confusion to co-director Ethan Coen. Isaac's role (and Llewyn Davis' role) is to provide a "puh puh" sound effect lead up to the "please" that starts the chorus. Their conversation -- Isaac's confusion on just how many "puh"s he's supposed to sing -- was immediately written into the final film as a conversation between Llewyn and Jim (Timberlake).

Oscar Isaac: Yeah, it's true. Ethan kept pushing for weirder and weirder sounds from everybody. So, that's where the "puh, puhs" came from. I remember being like, "What?"

T Bone Burnett: And then they just used it right in the movie, except it was Jim explaining it instead of Ethan.

Oscar Isaac: What I actually say to Justin was the actual conversation I had with Ethan. "You want me to 'puh puh'? Alright? OK?" 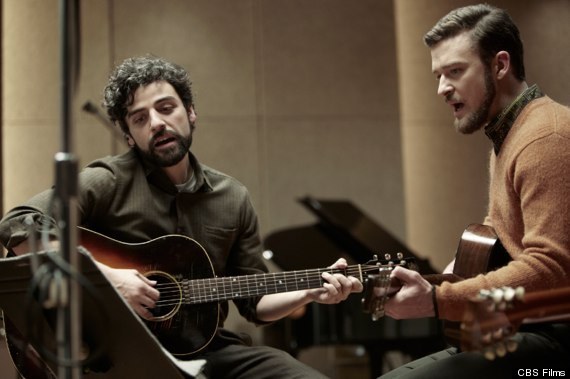 Adam Driver: Like, how do you do a song that is obviously goofy and funny, but has to be realistic enough that you can believe in the story that people are like, "I love this song! Yeah, 'Please Mr. Kennedy,' yeah"?

Oscar Isaac: Oh, yeah, it's a funny song. There was definitely some breaking here and there.

T Bone Burnett: Music in film is a special effect -- it creates a heightened reality. So, it's like an explosion or something. So, even if it's bad, it still had to explode.

Oscar Isaac: You have a good time, because you're a musician and you like to play -- even if it's shitty music. And the thing is, it being shitty, that's just Llewyn's point of view. It's not the Coens' point of view or T Bone's. They want to make it a great song.

T Bone Burnett: It's a knockout.

On Sept. 29, 2013, a special concert was held in New York City to celebrate the music of "Inside Llewyn Davis." Isaac and Driver performed "Please Mr. Kennedy" live in front of an audience, only with Elvis Costello filling in for an absent Justin Timberlake.

Oscar Isaac: To be on stage with Elvis Costello, that's all pretty new. On the set, I know that if I screw up [the "puh puhs], I have another take. On the stage, that's it, man. It was definitely, definitely intimidating.

Adam Driver: [Joking] Right, Elvis Costello. Then T Bone says, "Jump on stage with Oscar." We're all going to be singing and Patti Smith will be there. This is all part of my plan.