What has happened to our gun laws -- especially the assault rifle ban that expired in 2004? The Australians had the courage to pass tougher gun regulations -- Australia's Prime Minister, in particular, at the time. It takes courage, in other words, something U.S. politicians seem to lack.

Conservative Australian Prime Minister John Howard, a close ally of George W. Bush, faced political and public resistance to the laws. After just three months as the country's leader, Howard wore a bulletproof vest as he addressed a hostile 3,000-strong crowd opposed to the reforms.

How did he do it? The current Australian gun laws were passed after 35 were killed and 23 wounded in a 1996 mass shooting in Port Arthur, Tasmania. The shooter was able to buy his assault rifle, even though later he was later determined by authorities to have an IQ of 11. There hasn't been a mass shooting in Australia since then.

Just twelve days after the Port Arthur massacre, the Australian prime minister, John Howard, announced a sweeping package of gun reforms in a country where firearms had long been considered an essential prop in the national mythology of life in the bush.

"At that stage the gun lobby was the ruling lobby in Australia," says Philip Alpers, associate professor at the University of Sydney. "What happened at Port Arthur is that they were outpaced, outflanked and outwitted by a man who had the power to move in 12 remarkable days."

Tim Fischer was leader of the National party and Howard's deputy prime minister in the Coalition government, charged with persuading skeptical country voters to support, or at least accept, reforms. "Port Arthur was our Sandy Hook," he says. "Port Arthur we acted on. The USA is not prepared to act on their tragedies."

It was called the National Firearms Agreement -- legislation that outlawed automatic and semi-automatic rifles, as well as pump-action shotguns. At the heart of the new law was a massive buyback of about one-fifth -- 640,000 -- of all firearms in circulation in Australia. The country's new gun laws prohibited private sales, required that all weapons be individually registered to their owners, and required that gun buyers present a "genuine reason" for needing each weapon at the time of the purchase, as well as a 28-day waiting period while backgrounds were checked. (Self-defense could not be a reason.) In the wake of the tragedy, polls showed public support for these measures at upwards of 90 percent.

"The laws had widespread public support but faced fierce opposition from some rural supporters ... because they believed they were unfairly paying a price for the misdeeds of others," Howard told NBC News in a statement. "This resentment assisted the rise of a new political party which damaged the government at the following election."

Howard persisted with introducing the laws, and went on to win that election and lead the nation for more than a decade. He considers the reforms as a key part of his legacy. An article published online in July by the NRA claimed there was "growing consensus" that the laws hadn't made Australians safer.

Howard acknowledges that "major cultural and historical differences" make it difficult to draw comparisons between the gun cultures in the U.S. and Australia. "Although I had not anticipated the need to act on this matter so early in my term of government, I had always believed there was a clear link between the ready availability of guns and gun-related death," Howard said.

"The national gun control laws enacted after the Port Arthur massacre remain one of the major social reforms ... of [my] government," he added. "All the credible research both in Australia and elsewhere shows that the gun control laws have markedly reduced gun-related deaths." 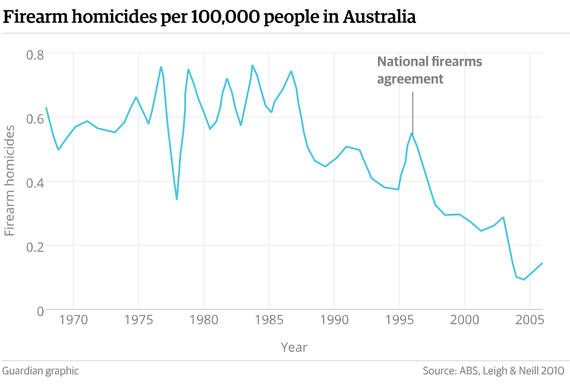 Total intentional gun deaths fell by half in the decade after the 1996 restrictions were put in place, even as Australia's population grew nearly 14 percent. The rate of gun suicides per 100,000 people dropped 65 percent from 1995 to 2006, and the rate of gun homicides fell 59 percent, according to a 2010 study by Andrew Leigh of Australian National University and Christine Neill of Wilfrid Laurier University.

"Australia is not like the U.S." said the Sydney Morning Herald's Michael Pascoe in response to President Obama's remarks on last year's Umpqua Community College killings by a deranged killer, whose mother kept at least seven guns at home, in addition to the eight guns plus ammunition carried by the shooter in the slaughter of college students and a teacher.

President Obama had said, "We know that other countries in response to one mass shooting have managed to craft laws that almost eliminate mass shootings, friends of ours, allies of ours, Great Britain, Australia, countries like ours."

In fact, the US now has a gun homicide rate 370 times that of Australia's. "Unlike the US," said Pascoe, "we collectively decided to have a decent social safety net, the concept of a living wage and make good education freely available. Most of us are wary of those with extreme views of any kind."

"The US is too immature a society to be allowed to play with guns," said the Sydney Morning Herald's Pasco. "It has never shed its Wild West mythology. Americans still use their courts to kill people, which sends a message in its own way."

And, we do not have a leader or leaders with enough courage to stand up to the gun lobby, as Australia's John Howard was able to do. Isn't their most important job to protect our citizens, regardless of creed or color?