Long ago, in a galaxy seemingly far, far away, the federal government once played an important role in funding local parks, including parks in cities. But in recent years, the feds have had a more modest role in building and restoring our parks, and even that role is now at risk.

Recently, federal and local officials called for the Land & Water Conservation Fund (LWCF) to be fully funded at $900 million a year, and to be re-authorized by Congress. Its current authorization sunsets in September unless Congress acts.

Leading the recent effort, which was organized by the non-profit City Parks Alliance (CPA), was Interior Secretary Sally Jewell, who was joined by White House Council of Environmental Quality Acting Chair Mike Boots and a quartet of city mayors from both sides of the political aisle, including Fort Worth Mayor Betsy Price, Denver Mayor Michael B. Hancock, Salt Lake City Mayor Ralph Becker and Hartford Mayor Pedro Segarra. The CPA also released a comprehensive report on the legacy and benefits of the LWCF, with case studies of how a number of cities have improved parks and brought additional public and private resources to match the federal funds

The LWCF is the only way for the federal government to give back to state and local governments some of the money it collects, so they can invest in parks. Created 50 years ago, LWCF uses royalties from offshore oil and gas leases to fill its coffers, so you can't even say taxpayers pay for it. Since 1965, the LWCF has provided matching grants to create more than 42,000 state and local parks, playgrounds, urban wildlife refuges, greenways, trails, and open spaces. LWCF requires a one-to-one match from state and local governments. In addition, LWCF grants have spurred billions of additional public and private investments in public parks.

For years, LWCF was supposed to receive $900 million annually, but Congress has repeatedly raided the fund and only once has it been fully funded. A portion of what is set aside by Congress goes to federal agencies like the National Park Service to buy land. A smaller portion goes to the 50 states, to be doled out to counties and cities. So by the time the money actually gets to the cities, it is normally hundreds of thousands of dollars at best, but often much less, and seldom every year.

On the other hand, these relatively tiny amounts of money--which aren't even a rounding error in the federal budget of more than $3.5 trillion (the entire LWCF, fully funded, costs half as much as one bomber)--can mean a lot, especially to smaller cities who often themselves have strapped budgets. Because these federal funds require local matches to be activated, they can jump start projects. For example, Fort Worth Mayor Price said $750,000 in LWCF money was used to buy 350 acres of Gateway Park in that city, according to the CPA report. An additional $4.8 million has been committed by state and local sources to double the size of the park. Gateway Park hosts 15 to 18 tournaments annually involving out-of-town sports teams, with an economic benefit of $5.5 million per year to Fort Worth.

In my own experience running the New York City Park system, we found LWCF grants, which were relatively infrequent, to be nonetheless helpful in getting specific projects off the ground, and the money often helped us start projects in underserved communities.

But to be honest, the federal funding provided to cities through the LWCF paled by comparison with federal funding that once flowed through another program, now moribund, known as UPARR, which stood for Urban Park & Recreation Recovery act. In its heyday in the 1980s, UPARR funded not just major park and facility renovations on a regular basis in New York and other cities, but also paid for innovative programs such as one that launched an urban park ranger program in the then-badly deteriorated and dangerous Crotona Park in the South Bronx.

And of course, the great-grandmother of all federal programs used to build and restore parks was the Works Progress Administrations (WPA) and its predecessor/partner program, the Public Works Administration (PWA), created in the 1930s to rebuild deteriorated infrastructure and put millions of unemployed people to work during the depths of the Great Depression. Communities across the country still benefit from the tens of thousands of parks and facilities created by this innovative program, with landmarks including Colorado's Red Rock amphitheater and New York City's 11 architecturally distinguished Olympic swimming pools, still in use almost 80 years later. 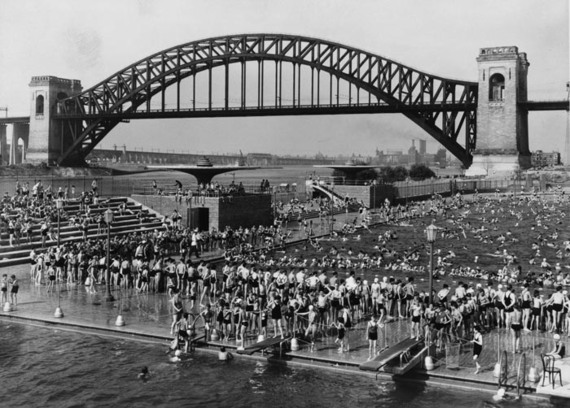 To put things in perspective, total LWCF money that made its way to hundreds of cities last year is a mere pittance compared with what the City of New York spent by itself on building parks, so even fully funded, the LWCF will only play a modest role in keeping the nation's urban parks robust. And sadly, some in Congress don't seem to be enthusiastic about even this more limited role. Today, 83 percent of Americans live in cities and need parks and nearby places to get outdoors and play. Even if Congress fully funds the LWCF program at $900 million, that is only a small portion of what we need for our parks. As we heard from the mayors recently, LWCF and our parks have bipartisan support.

The City Parks Alliance and its terrific Mayors for Parks coalition reminds us that Congress has a moral imperative to return a small amount of money to cities to provide a very modest amount of support for parks which all of us use daily. Many organizations--like The Trust for Public Land--heartily agree, and others will certainly join the chorus of support. Hopefully, Congress will join in and say "amen!"