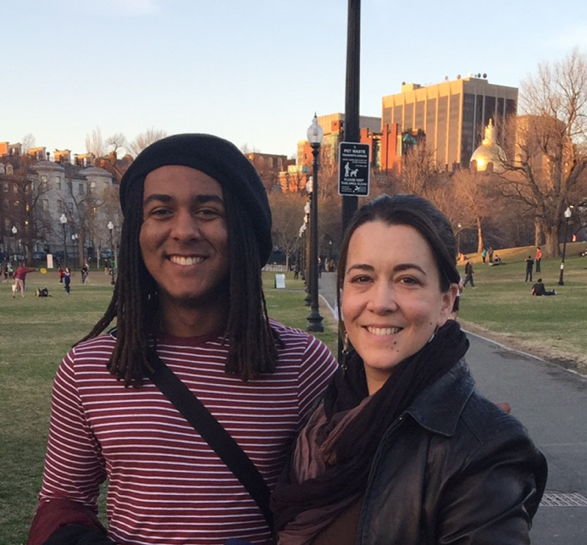 I'm a white mother of six children, five of whom are children of color, and four of whom came home to our family through foster-adoption. When I'm out and about with my kids, I often field questions about how my big, multiracial family came to be, and I try to receive them with generosity and openness -- to a degree. I want to give people the benefit of the doubt, and I hope that their curiosity stems from goodwill and perhaps an interest in adoption that comes from lived experience, or even from plans or hopes to become adoptive parents.

But I have to admit that I chafe at some questions that seem rooted in limited and limiting assumptions about race. One that really sticks in my craw is:

"Where are they from?"

The implication is that, somehow, brown people aren't from here.

I started getting this question in the singular, "Where is he from?", when I had my first child, Rory, who is my biological son. His father is Jamaican, and Rory, now 18, alternates between referring to himself as biracial or Black. Within the question lies the assumption that I adopted Rory, which tells me that the questioner doesn't see that despite our different skin colors and hair textures, Rory actually looks a lot like me. A lot.

And yet, the assumption about Rory's adoptive status has never been the hardest part of this question for me to swallow. Don't get me wrong: I take pride in having carried, given birth to, and nursed Rory for more than a year, and I am sort of baffled by the rigid thinking that underlies an assumption that he's adopted (white moms only give birth to white babies...ummm no, and maybe that's a topic for another blog post); but I positively rail against the question's implication that, somehow, brown people aren't from here.

"Where are they from?"

With regard to Rory, a snarky response might be, "He's from my womb," but when Rory was little I'd usually say something like, "Oh, he's not adopted." This called out the assumption about adoption and invited the questioner to reexamine why they'd assumed a white mother couldn't have a biological child of color.

But because I regard adoption as a complex, but not lesser, way of forming a family, I started thinking about responses that would resist conveying any degree of offense at the suggestion of adoption itself, and I came to the conclusion that a stronger response resists negative phrasing ("Oh, he's not adopted") and positively asserts, "He's my biological son." And, if I chose to name the city where I gave birth to him, Washington, D.C., I could highlight the fact that he was born right here, in this country -- just as so many other people of color are.

Surprise at the notion that my children are from here erases the long historical presence of people of color whose biological ancestors immigrated here, or who were enslaved and forcibly brought to the United States. And of course, Native American people were here long before any white people were. 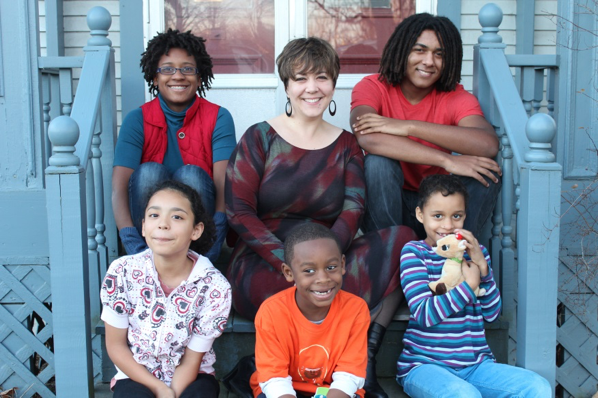 The author with five of her children in 2012. Photo credit Jessica Remmey

No one has ever asked me where my one white child is from. People assume his is my biological child, which he is, and they often comment on how much he looks like me, which he does. But when people ask,"Where are they from?" with regard to my other children of color, not only are they assuming that they're adopted, they often react with surprise when I confirm this assumption but say, "Massachusetts" or when I name the cities their birth-families are from:

"Holyoke, Springfield, Boston..." Yes, many families adopt children from other countries, but why is this so often the default assumption about white parents with children of color? Why the surprise that my adopted children of color are from...right here?

The dynamic I am describing seems rooted, in part, in what Audre Lorde called "the mythical norm" which renders as other those who aren't "white, thin, male, young, heterosexual, Christian, and financially secure" (to which I'd add cisgender, neurotypical, and able-bodied). Surprise at the notion that my children are from here, Massachusetts, USA, erases the long historical presence of people of color whose biological ancestors immigrated here, or who were enslaved and forcibly brought to the United States. And of course, Native American people were here long before any white people were.

"Brown people are born here too!" I'm tempted to exclaim when faced with this question...but I don't. I admit that sometimes, due to protectiveness or to a lack of energy or patience, I don't engage much at all. But when I sense curiosity rooted in openness, I might seek to raise awareness about the fact that there are over 100,000 children in the United States without permanent families, and many of these children are children of color.

None of them asked to be born into the world, or to have their birth families face the crises they did that resulted in state intervention. None of them are responsible for the systemic injustices and oppression that help perpetuate these crises and the responses to them. All of them deserve and need stability and love and permanency with a family to call their own. Where are they from? They are from here.

They are from us.