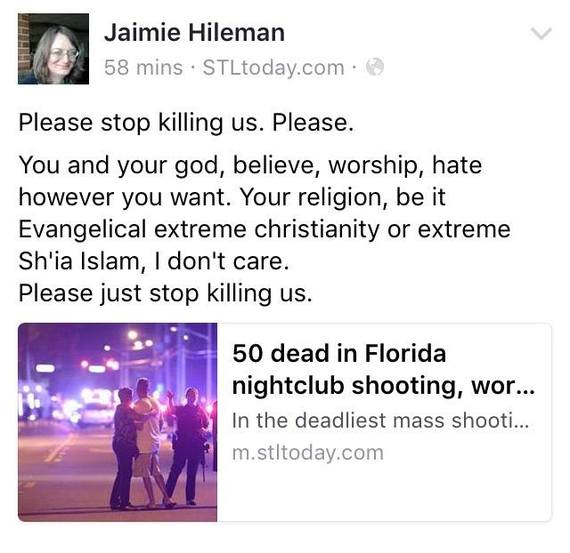 This is what I read on a friend's Facebook page on Sunday. She was responding to the mass murder at Pulse in Orlando, but she's no stranger to the reality of violence against the LGBTQ community. As a trans woman and Board President of the Metro Trans Umbrella Group in St. Louis., Jaimie Hileman receives a glut of hate mail and death threats.

"I am receiving many more than before, that's why I started saving them, so if I'm murdered the FBI has something to work with."

She wrote this while talking to me about the death threats that -I- recently received in response to a satirical post I wrote titled Jesus: The First Transgender Man, which points out the problem of biblical literalism when used to deny LGBTQ rights. I'm not sure what sorts of groups are targeting Hileman, but in my case, the threats came solely from Christians.

The mass murder at Orlando's Pulse was an action of hate and of terror, apparently driven by fundamentalist religious ideology. The same sort of fervor that drives Hileman's need to save copies of threats for the FBI, and that I saw snaking its way through comments on the Christian news sites and YouTube channels which lambasted my post.

And that made me wonder about something.

I know little about the Muslim faith. But stored in the small collection of things I do know is that it is one tine in the trident of religions which sprung from Abraham's loins. I did some googling and discovered that the Pentateuch (the first five books of the Hebrew Scriptures, called the Torah by Jews) is considered a holy book of Islam. This means that all three Abrahamic faiths rely on this collection of scripture as foundational. The third chapter is Leviticus; a collection of laws containing the primary "clobber passages" which Christians use to declare same-sex relationships to be sin. There are two of these passages in Leviticus. Here's the second:

Leviticus 20:13 (RSV) If a man lies with a male as with a woman, both of them have committed an abomination; they shall be put to death, their blood is upon them.

And there we have it, the root of it all; scriptural proclamation that homosexual behavior is punishable by death. This is where it begins, and why it continues to thrive in fundamentalist followers of all three Abrahamic faiths.

I wrote my first piece for the Huffington Post a little more than a year ago. It described a young man's experience at the 2015 pride parade in Jerusalem. He'd come out to his dad two days before, and then marched joyfully with the crowd. Joyfully, that is, until a girl walking a few feet in front of him was viciously stabbed to death by an ultra-Orthodox Jewish man.

The perpetrator committed the same crime some years before, and was imprisoned for it. But the manic drive to kill gays because of the Leviticus passage was strong enough to overcome his fear of returning to jail.

This morning I nearly vomited while watching a video of a Christian "pastor", Steven Anderson, celebrating the death of the Pulse victims as good news, calling them pedophiles and deviants. YouTube had the good sense to remove the video from his page because it violated their community standards, but it's been mirrored:

If the mirrored video gets pulled, you can read excerpted text from it here.

This ungodly hatemonger covers his butt by saying that Christians should not become vigilantes and shouldn't murder gays. Instead he proclaims that homosexuality should be illegal, and that guilty people should be executed.

It's the same concept that this Muslim scholar recently discussed during a speech near Orlando a few weeks ago:

Muslim. Christian. Jew. All believing the same thing; that a single line in the book of Leviticus warrants the death of those who have physical relations with a person of the same sex. There are other Levitical laws demanding death; for adulterers and disobedient children, for example. But for some reason "Pastor" Anderson and his ilk don't demand that those sinners be executed.

I don't know why.

I'm a Christian woman, married to a Christian woman. We revere the scriptures and consider them holy. We are speechless and gutted by religions which proclaim a basis of peace while acting as incubators for hatred and violence. And we don't know what we can do about it.

All we can do is repeat what Hileman said.