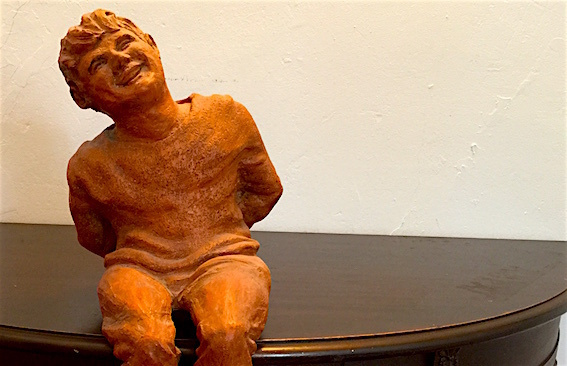 The sun is about to rise. I'm sitting at the dining room table drinking coffee surrounded by notecards. I'm making notes--as I have been for about a year, now--for my Orson Welles opera. My wife and sons won't be up for hours.

I now understand the significance of the statue of the boy that I modeled for as a child--the one that my mother sculpted a half century ago which still sits on the top shelf of a bookcase in my sons' bedroom. I understand now the many ways that my artist mother looked at me as she fashioned it. Every time our eyes met, it was different--the probing, impersonal stare of an artist, the loving look of a mother, the appraising look of a critic, the self-contained look of a woman I never knew, but would have liked. I understand now how she found it possible to stop saving rejection slips. How, in time, she had no more use for the typewriter. How she eventually discarded the tools and the clay. I understand, of course, because I now look at my sons as she once did me. I also understand now that, as a child discovering the frog that she had hidden behind the boy's back, I had only grasped the statue's superficial secret. I have had to grow up to comprehend the deeper truth. I have had to let go of him myself before I could understand what she had done. The sculpture had never been of me at all. She had sculpted the Other Daron--the brother who had been born immediately before me who had died after only a few days. He had been baptized; when I was born, I was given his name. I couldn't help feeling even as a child that I was living for two. He was my Rosebud.

What others deemed self-centeredness I called self-abnegation for the sake of making art. I had in fact been fetishizing the details of my own narrative. (I did not succumb to what Gore Vidal in Screening History described as "the American writer's disease, the celebration if not of self, of the facts of one's own sacred story.") I was not selfish enough to sacrifice others for the sake of my self-actualization. I had too sane an idea of my work's relative worth. Not only did I lack the Quixote's "madness," I had too clear an understanding of how subjective the decisions that facilitate careers in the arts (I had witnessed firsthand the impact that those decisions had on people who were not naïve, but who believed--or needed to believe--that cream will always rise to the top) were made.

One of the principle ironies of my aesthetic trajectory--like so many others'--was that once I mastered my craft and was capable of clearly articulate my personal truth, I realized that my truth was just a manifestation of my own ego, and that it was my service as a vessel for the music itself (which, as Nadia Boulanger pointed out, has no beginning or end) that had, from the start (if anything I had done had in any event), been of use to others. Seamus Heaney (after whom my son is named) described this realization perfectly in his poem "The Rainstick," when he wrote,

Who cares if all the music that transpires

Is the fall of grit or dry seeds through a cactus?
You are like a rich man entering heaven
Through the ear of a raindrop.

So, okay, okay, Life is Art, and vice versa. And Life's not worth living without Art. But if an artist doesn't put people first, his art is onanistic. I believe that works of art must have a utilitarian function, that the purity of l'art pour l'art is a sterile purity. "Musick," as William Congreve has Almeria say, may have "charmes to soothe a savage breast," but, as Ned Rorem once said, music "won't make a Democrat out of a Republican and it won't make a peacenik out of a warmonger, as the Nazis, who were very sensitive to music, have proved." I have written "political" pieces such as Dear Youth (anti-war), A Woman in Morocco (anti-human trafficking), and Bandanna (illegal immigration) for my entire career out of a belief that art speaks truth to power. I've concluded that--in my case, at least--art can make a political statement, but it cannot have a political effect. I believe that Orson Welles learned this early on, and that the fact that he--a deeply-committed social activist in his way--spent his life centered on Process rather than Completion was a tacit acknowledgement of that. As I write my opera about Welles, I have come to grapple with the fact that the enduring value of the music that I've labored so assiduously since the age of fifteen to create shall probably have been as my Rosebud, my life's plot trigger, or MacGuffin.

I now realize that, like most people, my life thus far has simply limned the psychological transit of Mozart's slow movements. The formal rounding off of their form manifests not just a return to innocence, but the actual healing of every fractured wholeness--a healing of every wound, a righting of every wrong. How can the theme of one's life return, transfigured, without the experience of pain, an acceptance of transience, and an understanding of loss? Without expulsion from Paradise, one need not seek redemption, or labor to recover bliss. My life as a composer was an effort, as Maynard Solomon wrote, to create "consoling structure[s] that do not accept loss or separation as a tragic finality."

I rise from the table to pour some more coffee from the pot. Everyone is still asleep. I can imagine at these moments without regret what things will be like here after I am gone. I am comforted knowing that my sons stand as good a chance of growing up as strong and true and as undamaged by me as any loving father could have desired. That means more to me than anything else in the world. My sons will know the childish comfort of having observed that their parents love them and one another. They will feel for a few wonderful years that nothing will ever change their world.

My sons will enjoy the safety of living in a village where they may walk home after dusk illuminated by the soft, peaceful, flickering golden light streaming from the windows of the homes of neighbors that know, love, and will help to protect them. They will feel good, clean dirt between their toes. They will run in the grass barefoot without the risk of stepping on a used syringe, or slipping on used condoms. They will feel over-ripe tomatoes burst in their hands when on a sultry summer afternoon they pick them from our garden. They will experience languid summers, grow loopy with sunshine; enjoy the healthy silkiness of their own skins. They will spend entire days building dams across the brook behind their Grandparents' house, drawing treasure maps, catching and releasing bugs, making believe that they are La Longue Carabine in the woods, crying "My death is a great honor to the Huron, take me!" to no one in particular. Dog day cicadas will sing their burring songs by day, crickets their chirrups by night. My sons will run into the middle of the lawn, close their eyes, lean their heads as far back as they will go, feel the sun on their faces, spin around, and imagine they are swimming in the hot, lively air above them, awakened after a seventeen-year-long slumber. At the end of those days, they will sit around our big, inviting dinner table with their parents, the late summer night air flowing through all the open windows and doors making them groggy. I will feel the joy of it all shimmering around me in its ephemeralness as I look from one face to the next amazed, amazed that such a perfect moment could even be possible.

They will have the space, the time, and the safety, to learn from their extraordinary mother how to revere the imaginative spirit as I learned to from mine. They will fall in love at the age of eight with the pretty girl on Alfred Street, endure the breaking and mending, mending and breaking and growing of the heart freely and completely given. They will use the tools that I gave them as children to learn how to be "humane and mostly happy" men after I am gone. In time, like their parents, each will discover his bliss, and derive fulfillment from the struggle. They will sing their own secret songs. They'll grapple with the Art versus Life dilemma and come to their own conclusions. One day they'll even realize that the struggle itself shall have been the point.

I hear the pounding of little boy feet upstairs. Pouring the last bit of cold coffee in the sink, I gather up the notecards on which I've jotted plot points and tiny epiphanies like a magician winding up an illusion and put them away for the day. I carefully wash and rinse the cup, place it in the drying rack, flip off the light, and walk into the living room. I hear the tulip trees in front of the house sough, followed by the susurrus of gentle spring rain. As I pass my little Baldwin grand piano, I feel a gentle tug. I pause, and affectionately run my palm along the lid. Of course I'll continue to compose, I tell myself, because now comes the good stuff.

I continue to the front door. Pulling it gently open, it occurs to me that from the moment that Mother died in my arms until the moment my first son crowned, my life was spent waking the dead. Sober, I think that I now stand a pretty good chance of spending what is left of it seeking the quick.

My sons, fresh from bed, and still in their pajamas, appear at the top of the stairs, rubbing the sleep out of their beautiful eyes. The sun has just risen. They descend the stairs, encircle me with their arms, and look up at me as they hug me. How could I possibly, under the circumstances, have regrets? Holding them to me, I wonder: will I be here to observe one day as they take their own reins, veering away off course in the matter of an occupation or profession? Shall I someday experience the almost superhuman compassion and sorrow of seeing them gallop off hell-bent to damnation without crying foul? The happy / sad of being a parent is that you can't keep your child in your arms forever. They have already begun to squirm away. When I release them, my heart sings as I watch them explode not into my time, but their own.