It's a nice sensation when you realize how objects and ideas intended for one path wind up taking you through a different landscape entirely. These uniquely (and obliquely) connected points of view are what's happening at PLUG Projects dual exhibitions, Out There and Reify/Deify.

Although their themes aren't intended to present a connection, it might be a good idea to consider thinking of them as one. You will be rewarded with a duality of sculpture, photography, drawing and installation that brings together myriad ideas of life after Earth along with the rituals of desire that has kept us bound to terra firma.

The curators of PLUG have correctly made it impossible to not respond to Sarah and Joseph Belknap's enormous Planetoids (2013) blocking the entrance. Suspended from the ceiling with bungee rope, you must maneuver the polysterene foam and Styrofoam objects that resemble the continents of Australia, Antarctica and Africa in radioactive hues. Almost everyone assumed you couldn't interact with or touch them, but you had to get past the doors and visitors were assured they could handle them. Then people stopped looking at thee objects as something to avoid and instead study them so that theories could rise to the surface. Everyone's analysis and observational input becomes important. 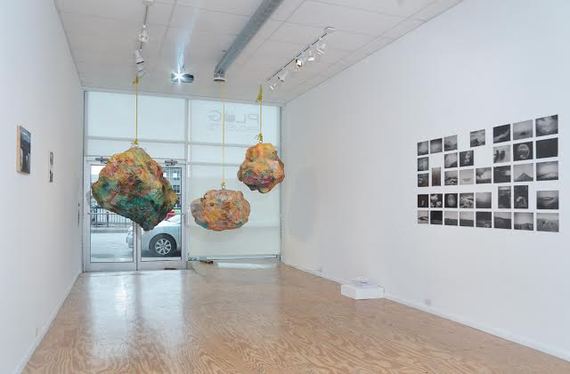 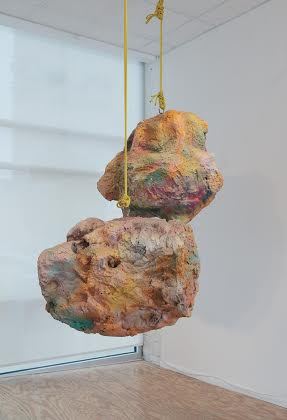 I look to artists and makers to act upon instincts to provide answers to questions many of us are often afraid to ask. With that in mind, these works are an exploration of a world in mourning. By observing and interacting in this context, my cynical self sees documentation that unmasks our ignorant privilege and its accompanying failure to understand the present. Can we grasp meaning from a distance and only in hindsight? In so many sci-fi movies, the trip into outer space is often driven by some immediate earthbound dilemma; attack, catastrophe, escape, and now we stand before these observations, a ghostly study of what went wrong.

Pictures of the Earth (2007-2015) are Sean McFarland's 37 Polaroid reproductions on newsprint. Images of water, clouds, storms, tornados and other surfaces taken from afar add to the bizarre idea of slides imported from Earth for research. Their desolation only adds to the feeling that we are observing the world through a past darkly. 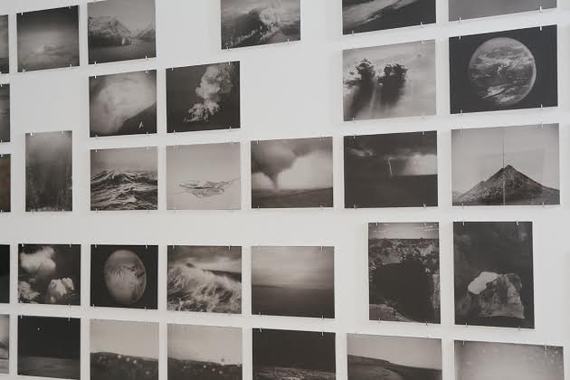 There is a rat-a-tat-tat-tat of a digital projection Backandfortmanteau (2015) by Corwin Levi implies that we are far into the future and our science has become dated and obsolete, but what we need to observe remains imperative.

There are gouche on paper works from Siobhan McBride that doesn't necessarily coordinate succinctly with the other works throughout, but does add certain dystopian elements. Thinking particularly of Grid, in the upper portion of this piece is a silver, gelatinous cloud that closely resemble the recently discussed edible water containers, injecting an element of hope not to be ignored.

Multimedia artist Davin Wante's Pop Art references should not be denied but the narrative in Reify/Deify is confusing. His objects are intended to be more serious than they appear but it's also impossible to ignore their cultural and sexual humor. These outward elements are a presence that can crowd out his subtler works, like the poetically simple bust, Unstable Axiom (2015). 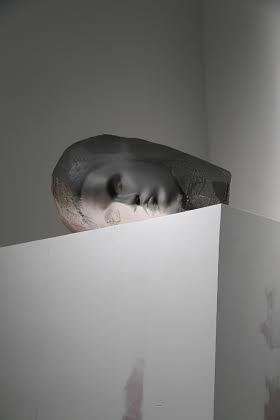 Over the years, Watne has produced ideas that references the lines of holistic beliefs, sexuality and consumerism. This current body of work is not much different, but here, in a smaller space where full and total examination is inevitable, I feel these newer pieces tend to behave as supporting characters rather than protagonists. Reification of Taste (2013) are two foam and acrylic tongues standing erect in individual shallow black pools of water. Preserved as part of a deeper exploration or a remark of the tongue as sexual object is an innuendo that doesn't make itself clear. They're imposing and might better engage in a dialogue with the enormity of Planetoids. 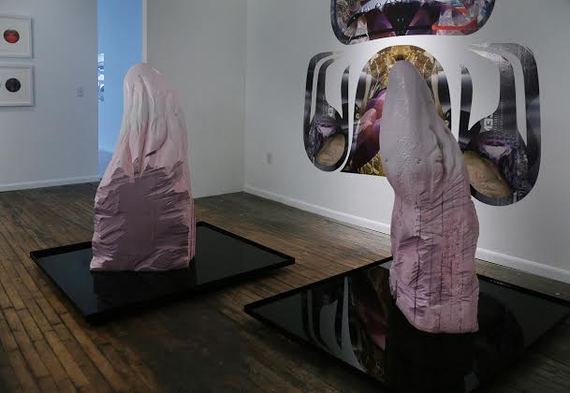 Thinking back to Watne's earlier car crash series of the mid-2000's; startling and gripping paintings that spoke about mankind's collision with nature. I conclude these current works are a direction in the abstract that still needs sorting out if it is to be continued.

One needs only to turn to the opposite wall to see his stream of consciousness drawings There Is A Shape We Don't Recognize (2015) to fully understand that Watne has the power to realize provocative ideas. Advert Studies 1 & 2 (2014, digital print on archival paper) also supports this and are a seamless continuation of Watne's emotional thinking. 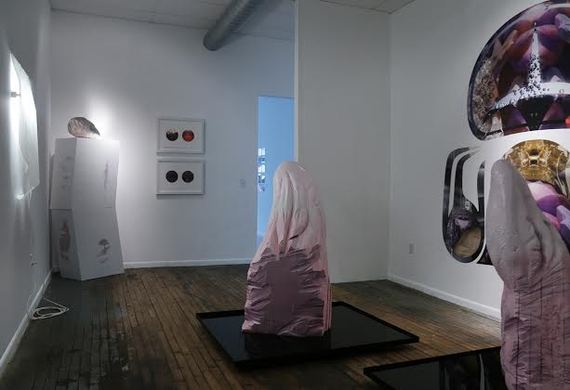 Beneath their inertness, the works in Reify/Deify and Out There are stabilized by long memories. Their stillness is alive with all they have witnessed. Whether recently constructed or not, a story takes root in our mind as we experience their messages.

The overarching theme one ought to consider is the future was once in our hands and now it's gone. I see these two shows as manifestations of a world not gone mad, but simply gone. These are some of its artifacts to recall as we fly through an infinite darkness.