What are those weird dark patches on Pluto?

Photos beamed back recently by NASA’s New Horizons spacecraft show several evenly spaced spots along the equator of the icy dwarf planet. Scientists are at a loss to explain the spots, which are unlike anything seen before. But the researchers are hopeful that the spacecraft, which is poised to make its closest approach to Pluto on July 14, will provide better images that may reveal some answers. 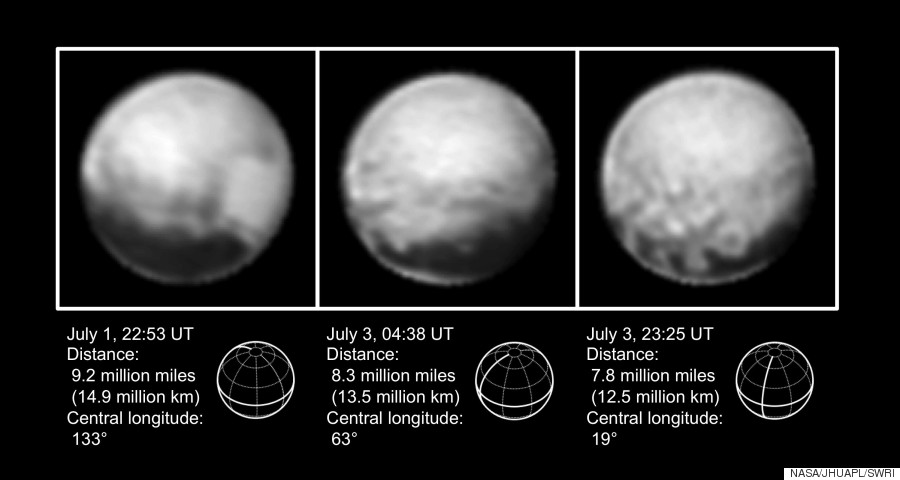 The spacecraft's Long Range Reconnaissance Imager obtained these images of Pluto between July 1 and 3. The images show the full extent of a continuous swath of dark terrain that wraps around much of Pluto’s equatorial region. The western end of the swath (right image) breaks up into a series of dark, regularly-spaced spots.

New Horizons scientists combined the July 1 black-and-white map of Pluto’s surface features (left) with a map of its colors (right) to produce a detailed portrait of the dwarf planet's northern hemisphere (center).

The spots were first detected in New Horizons images taken in late June. Each spot is about 300 miles in diameter.

“It’s a real puzzle--we don’t know what the spots are, and we can’t wait to find out,” Dr. Alan Stern, principal investigator for the $700-million New Horizons mission, said in a written statement. "Also puzzling is the longstanding and dramatic difference in the colors and appearance of Pluto compared to its darker and grayer moon Charon."

Indeed, the spots aren't the only new findings that recent images have yielded. So far, New Horizons images have also shown Pluto's reddish hue, the "orbital dance" of its biggest moon Charon and its two distinct faces, one that's smooth and the other that's peppered with the elusive dark spots.

“Even at this resolution, Pluto looks like no other world in our solar system," Dr. Marc Buie, a New Horizons mission scientist, said in a separate written statement. “We’re already seeing a remarkable amount of detail, and the complexity continues to increase as the images get better.”