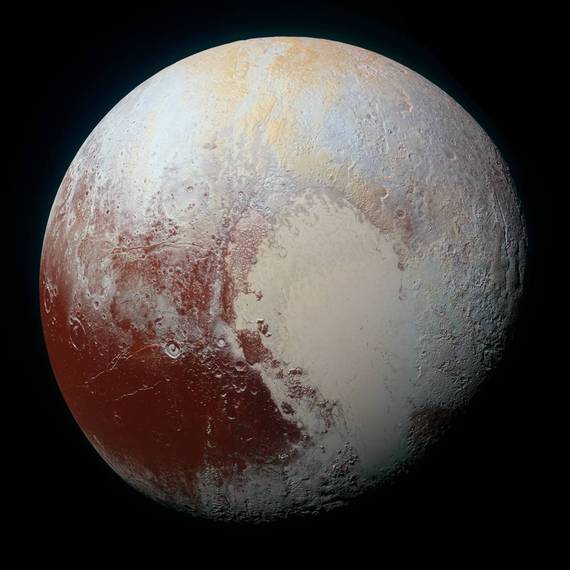 A Grown-Up's View
When I was a kid, Pluto was a planet. Of course, when I was a kid our map of the solar system was very immature. Astronomers knew of nine round planets that went around the Sun, and Pluto was one of them. But Pluto was always the oddball. It was the smallest, the coldest, the last, and the planet with the weirdest orbit. But in my youth, it was always a planet, and I liked Pluto all the more for its eccentricities.

However, in the 21st century we grew up. Astronomers put aside their smaller toy-telescopes of the past and utilized their new big-boy technology. With these grown-up telescopes, we learned that the solar system was much, much more complex. In addition to the planets, there are over 600,000 asteroids of various sizes and shapes that circle the Sun. There are objects that defy easy definition that swing wildly in elongated orbits or hang out near planets or even between planets. Then, there is the big shocker: we found over 1,000 other objects in Pluto's realm and beyond. Pluto, it turned out, was not alone, was not the last, and was not even weird. It had over 1,000 other brother-, sister-, and twin-worlds way out there. There is Eris an object nearly as large as Pluto, Makemake, Haumea, and countless other unnamed orbs plying the outer edges of our solar system. These new objects along with Pluto didn't fit into the categories we set up in our infancy.

Seeing Pluto Clearly
And there is another layer to our solar system, a region even farther from the Sun where a mysterious object named Sedna lives. Sedna takes almost 12,000 years to circle the Sun and it may be the forerunner to a myriad of future discoveries in this region of space. Perhaps a new, never-before-seen planet exists 10-1,000 times farther away than Pluto.

Ten years ago, an international group of astronomers decided Pluto's fate. Pluto was not a planet in the same way that the Earth was a planet. They did not destroy it. Pluto did not fly out of the solar system or get sucked into a black hole. It did not change at all. We changed. It was as if we went to the eye doctor and got new glasses. We see Pluto much more clearly for what it is.

I miss my childhood fascination with Pluto, but it's time to come of age. I know there will be some growing pains, but after ten years let's fully jettison our childish notions of Pluto. Pluto isn't a planet. My new boyish crush is with a true oddball - a lone wolf in the depths of space called Sedna. Let's not bemoan the loss of Pluto but instead revel in what has been gained. Check it out and you'll see that Sedna is the new Pluto!