A NASA spacecraft hurtling toward a 2015 rendezvous with Pluto has captured an amazing video of the dwarf planet and its largest moon, Charon.

The New Horizons probe used its onboard telescope to record a video of Charon and Pluto locked in their orbital dance. The movie is composed of 12 individual images taken from July 19 through July 24 — almost exactly one year before the spacecraft's flyby of the distant dwarf planet, which is scheduled for July 14, 2015.

"The image sequence showing Charon revolving around Pluto set a record for close-range imaging of Pluto — they were taken from 10 times closer to the planet than the Earth is," New Horizons principal investigator Alan Stern, of the Southwest Research Institute in Boulder, Colorado, said in a statement. "But we'll smash that record again and again, starting in January, as approach operations begin." [New Horizons' Flight to Pluto in Pictures]

"We are really excited to see our target and its biggest satellite in motion from our own perch, less than a year from the historic encounter ahead!" he added.

New Horizons was about 265 million miles (426 million kilometers) from Pluto when it took the 12 photos, researchers said.

This "movie" of Pluto and its largest moon, Charon, was taken by NASA's New Horizons spacecraft as it raced toward Pluto in July 2014. Credit: NASA/Johns Hopkins University Applied Physics Laboratory/Southwest Research Institute

Because of their close proximity, Pluto and Charon orbit a central gravity point, known as a barycenter, that is located between the two binary objects. The new video released by the New Horizons science team is centered on that barycentric point.

The New Horizons team released the new video late last week, just a few days after other spectacular Pluto and Charon imagery from the ALMA radio observatory in Chile came out.

ALMA, whose name is short for Atacama Large Millimeter/submillimeter Array, took the photos to help guide New Horizons' journey to the Pluto system, which lies about 40 times farther from the sun than Earth does. 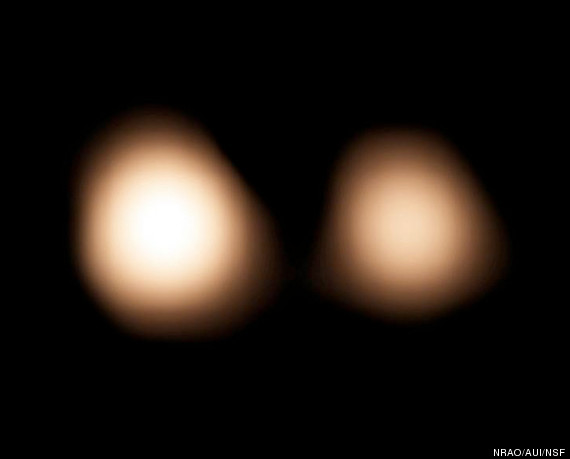 ALMA's observations are helping pinpoint Pluto's position and path around the sun, which to this day are imperfectly known, researchers said. The knowledge gap isn't terribly surprising, considering the dwarf planet has been observed for just one-third of an orbit to date. (Pluto takes 248 years to complete one lap around the sun and was just discovered in 1930.)

The ALMA team first observed Pluto and Charon in November 2013, then did so again once in April 2014 and twice this past July. More observations are planned for October, researchers said.

New Horizons is about to get a deep-space break. The probe's handlers plan to put it into hibernation on Aug. 29, just four days after New Horizons crosses the orbit of Neptune. They'll wake the spacecraft on Dec. 6 to get ready for the flyby, researchers said.