As Virginia institutions celebrate the 400th anniversary of the Pocahontas-Rolfe marriage this year, a crucial event in the Commonwealth's venerable self-image, we should recognize that existing Native traditions put it in a very different perspective. In 1614, Pocahontas, daughter of the chief of the Powhatan Indians, was baptized in Christianity and married planter John Rolfe, giving birth to her son Thomas.

But other Native voices, recording tribal oral tradition, remind us that Pocahontas's first marriage was to an Indian warrior named Kocoum and that this first marriage produced her first son, whose ancestors survive today.

These traditions are preserved in the 2007 book, The True Story of Pocahontas, The Other Side of History (Fulcrum Publishers, Golden, Col.), co-authored by Dr. Linwood Custalow and Angela L. Daniel. Dr. Linwood "Little Bear" Custalow grew up on the Mattaponi Reservation in Virginia where early in life he was given the responsibility of learning the oral history of the Mattaponi tribe and the Powhatan nation. Angela L. Daniel "Silver Star" is the President of the Foundation for American Heritage Voices and the designated anthropologist for the Mattaponi tribe. 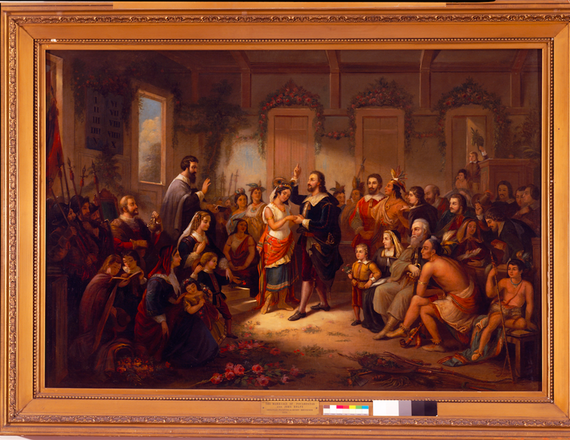 Henry Brueckner, The Marriage of Pocahontas, 1855, oil on canvas, 50" x 70". Bruecknerm whose dates are unknown, is remarkably obscure for a 19th century artist whose main work, above, was vigorously marketed. A pamphlet to sell this print depicts the marriage in romantic, flowery terms. The presiding minister is described as Alexander Whitaker, and behind him to the left sits the acting governor Sir Thomas Dale. The original was owned by former New York State Governor Nelson Rockfeller and donated by him to the state. Courtesy of the New York State Office of General Services, New York State Executive Mansion, Albany, N.Y.

Their book provides oral and written historical documentation that Pocahontas, at the age of 15 or 16, was already a wife and mother when she was kidnapped, converted to Christianity and married to John Rolfe.

Contemporary evidence of a first marriage also comes from a history by William Strachey (1575-1621), who was secretary of the colony during a brief stay. In his History of Travaile into Virginia Britannia, he listed among the favorites of Powhatan, "younge Pocohunta, a daughter of his, using sometyme to our fort in tymes past, nowe married to a private Captaine, called Kocoum, some two years since."

Prior to her celebrated marriage with Rolfe, Pocahontas and her husband Kocoum, the younger brother of Chief Japazaw of the Potowomac (Potomac) tribe, lived in the Werowocomoco Village. They later moved to Kocoum's home village, the Potowomac, along the Potomac river. Pocahontas gave birth to her first son there. 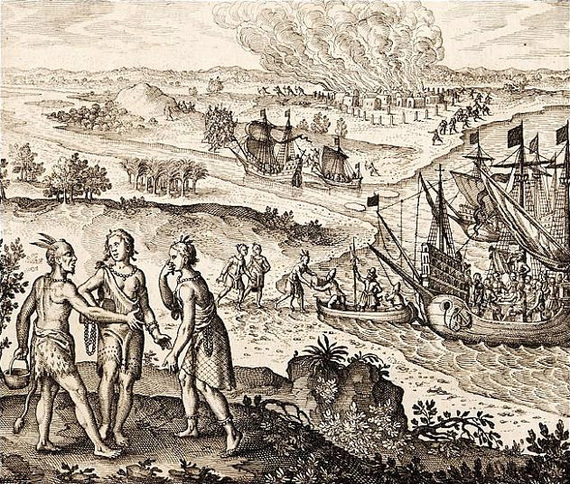 Johann Theodore de Bry, after Georg Keller, The Abduction of Pocahontas. In de Bry's American Part 10 (1618) (translation of Hamor's A True Discourse of the Present State of Virginia. [1615]). Keller invented the scenes, drawing on the written narrative. In foreground left, Iopassus and his wife trick Pocahontas (center) into visiting Captain Samuel Argall's ship, center right. The Indian village in the background was burned in 1614 during negotiations for Pocahontas' return. Image Courtesy of Virginia Historical Society

Captain Samuel Argall, an adventurer recently arrived at the Jamestown colony, heard that Pocahontas was in this area and sailed there determined to kidnap her as a royal hostage for the colony to hold in negotiations with Powhatan. He coerced Japazaw and his wife into tricking Pocahontas to come aboard his ship. According to oral history described by Custalow, Kocoum was murdered before the ship with Pocahontas on it set sail for Jamestown. But even if he had survived colonial attack, his marriage to Pocahontas was considered "pagan" and not bound by Christian bigamy laws.

According to Mattaponi oral history Pocahontas's mother was Mattaponi. Pocahontas's father, familiar to history as Chief Powhatan, was Pamunkey. (The Powhatan name came from his position as head of the Powhatan grouping of tribes, which he had assembled; his personal name was Wahunseneca.) Some Powhatan oral traditions state that Pocahontas's first son survived and was raised by Mattaponi women. Some Mattaponi Powhatan families, notably the Newtons, claim descent from him. Wayne Newton, the famous Las Vegas entertainer, is part of this family.

Custalow and his tribal ancestors challenge the English myths describing Pocahontas's voluntary Christian conversion and romantic love for Rolfe. As Custalow argues in his book, kidnapped people held hostage for long periods often identify with their kidnappers for survival, a phenomenon now labeled the Stockholm Syndrome. Any wife and mother who is kidnapped and held in captivity for over a year would experience psychological trauma. 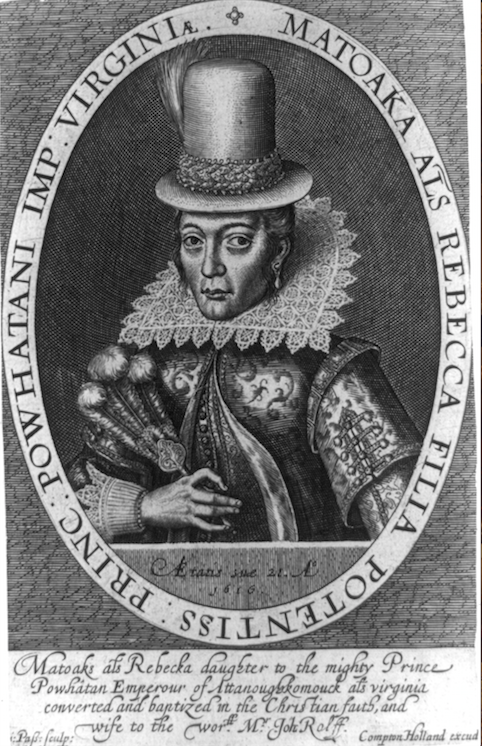 Engraving of Pocahontas (Matoaka als Rebecca) from Captain John Smith's General History of Virginia, 1624, believed to be based on a life portrait by Simon van de Passe. Courtesy William and Mary Digital Archives

According to Custalow and Daniel's account Pocahontas became so depressed and withdrawn during her captivity that her captors feared for her life. Word of the situation was sent to the paramount Chief Powhatan Wahunseneca, who then dispatched Pocahontas's older sister Mattachanna and her husband Uttamattamakin to help care for Pocahontas.

Upon their arrival, writes Custalow, "Pocahontas confided in Mattachanna that she had been raped." Custalow emphasizes that "Mattaponi sacred oral history is very clear on this." Custalow continues that Pocahontas also told Mattachanna "that she believed she was pregnant." Mattaponi oral traditions hold that Pocahontas's mixed-blood son Thomas was born out of wedlock, prior to the marriage ceremony between Pocahontas and Rolfe. There is speculation that the real biological father and namesake was Sir Thomas Dale, then the acting Governor of Virginia.

Whether general readers or scholars agree with all, some or none of the arguments presented in this book is not the main point. Its importance now in 2014 is that it gives us an opportunity to reflect on the upcoming 400th year anniversary celebration of the marriage between Pocahontas and John Rolfe and the relevance of that celebration for contemporary Powhatans, other Natives with similar histories, the Rolfe descendants, Virginia residents and the population in general.