There are a number of podcasts that feature role playing games as they're being played, such as Earwolf's Nerd Poker, Penny Arcade, and Drunks & Dragons. Hello From The Magic Tavern touches on that genre, but the best way to describe the show is that it features characters from a D&D adventure...except they're just hanging out. In a bar. Doing a podcast. 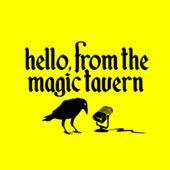 The setup is that the host, Arnie, is one of us. A regular guy. Who fell through a "magical dimension portal" behind a Chicago area Burger King into the land of Foon. To kill time until he can figure out how to get home, he lives in The Vermilion Minotaur, with a couple of whacked out co-hosts, Usidore and Chunt, who are on downtime between adventures. And, like most podcasts, they have guests.

This week it's Otok Barleyfoot, the owner of the Minotaur, and Blemish, the creepiest waiter ever to get on mic -- he even has the occasional cat crawl out of his mouth.

They've done a nice job with the setting - you can hear the ambient noise of what you'd imagine a medieval tavern might sound like -- and the characters don't really ever break...character. Which is totally unlike most of the fantasy gaming podcasts out there. It's also pretty funny, particularly once you get to know the characters -- it's kind of like the TV show Cheers...except with dwarves, elves, and wizards.

Podcasts I'm also listening to this week: Welcome to Night Vale, Bonus Episode 4 - Pamela Winchell; and You Better DON'T!, Epi18: Do Dogs Only Love Us For Our Internal Organs?

The Hello From The Magic Tavern review and other podcasts mentioned originally posted as part of This Week In Comedy Podcasts on Splitsider.com.