In the world of comedy podcasts there are actually very few that talk about how to do comedy. And, while Improv Nerd with Jimmy Carrane isn't an instructional "how to" course about improvisational comedy, there is a lot to be learned -- and some laughs along the way -- in Carrane's show. 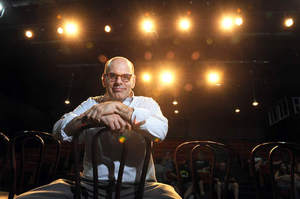 With each of his guests, he deconstructs how they approach improv, as well as how they use it in their lives. In Episode 98 he talks to the members of Sad On Vacation, a nine-member, all-guy sketch comedy troupe that got their start in Carrane's hometown of Chicago. Though most have moved to Los Angeles to pursue their own interests, they still band together occasionally, mostly to produces video sketches for the web.

As Carrane engages the group, they each have their own take on how effective (or not) improv has been for them, and how -- for some of them -- the techniques still inform their performances and writing today. Partway into the show, we're treated to several Sad On Vacation sketches, which skew a bit dark but pretty funny, even as presented in audio form.

Carrane is a savvy improv performer and instructor, which gives him the ability to ask some meaty questions and dig out some useful answers from his guests.

Like many podcasts breaking this week, Carrane spends some time up top talking about Robin Williams, but -- because the interview with Sad On Vacation was recorded some time ago, the show doesn't dwell on the event.

This review originally posted as part of This Week In Comedy Podcasts on Splitsider.com. Marc Hershon is host and executive producer of Succotash, the Comedy Podcast Podcast.