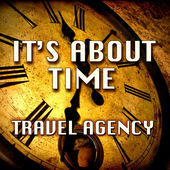 Charlie and Steve, refugees of the Great Terrestrial Radio Depression, hit the podwaves last year with their Cardinal James Show. This year, they've added to their workload by crafting It's About Time - "A time travel science fiction comedy romp through history."

I'm using the word "crafted" because there is a lot of production value behind the funny premise that the two bumbling hosts run a "time travel agency", booking trips to folks who either want or need to go somewhere in time.

These trips never turn out to be casual sightseeing trips. Instead, the sanctity of the time stream as we know it is frequently being threatened and these little jaunts - more or less - set things right.

In the most recent adventure, a wannabe member of the Rockettes who travels back to get a chance to join them at Radio City Music Hall stumbles upon a plot by Russian agents to infiltrate the famed dance troupe with an aim toward destabilizing the USA by defacing the Statue of Liberty.

At least, I'm pretty sure that's the main plot - there's a lot of action and subplots going on in the latest chapter - so much so that it's a two-parter!

The It's About Time review and other podcasts mentioned originally posted as part of This Week In Comedy Podcasts on Splitsider.com.