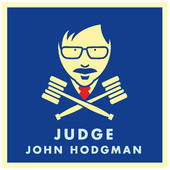 To the best of my knowledge, Judge John Hodgman is the only podcast where people bring their disputes before a Famous Minor Television Personality to be heard and judged. This week, Hodgman (in spite of his other TV and films roles, probably best recognized as "PC" opposite Justin Long's "Mac" in Apple's long-running series of commercials) hears the case brought forward from Claire against her husband Brian.

It seems the young married couple is moving from an apartment in Augusta, Georgia, to a house with some acreage in the country and Brian is getting the itch to do a little huntin'. Claire is against it, not because she's a vegetarian (she's not), but because she's squeamish about knowing where her meat is coming from. Brian, on the other hand, is a bit of a novice and has never bagged a deer or rabbit in his life.

Hodgman summons novelist/journalist Jonathan Miles (Want Not, Dear American Airlines) as an expert witness, who not only gives the thumbs up to Brian's knowledge of firearms but, following the Judge's compromise decision -- Brian can do his hunting but only when his wife is safely sequestered from having to watch the carnage -- he offers to join Brian on his first hunt to show him the ropes.

Some of the most fun in these episodes is after the judgement is rendered, when Hodgman and his bailiff, Maximum Fun's Jesse Thorn, are relaxing in chambers with a stiff drink, smooth jazz, and a few followup cases to comment on.

This review originally posted as part of This Week In Comedy Podcasts on Splitsider.com. Marc Hershon is host and executive producer of Succotash, the Comedy Podcast Podcast.