One could have, perhaps, predicted the glut of pop culture-oriented podcasts that have sprung up. Hell, it's the linchpin for the recently launched WolfPop network of shows. Less understandable (at least to me) is the rise of the trivia-oriented podcast.

There's Good Job, Brain, NPR's Ask Me Another podcast, and even Another Damn Trivia Show. 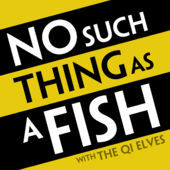 Now we're even importing our trivia shows. From over across the pond comes No Such Thing As A Fish, an offshoot of QI, which stands for Quite Interesting, a BBC2 TV comedy panel show. The TV show is hosted by famed English comedians Alan Davies and Stephen Fry.

The podcast spinoff is hosted by a quartet of the TV show's researchers (or the "QI Elves", as they call themselves): Alex, James, Andy, and Anna. And each week's show is based on the most interesting facts the four have managed to discover in the past 7 days.

The show is in four segments, each segment kicked off by a host's favorite fact for the week. In the latest edition, the inciting factoid was "Cows have friends, and they get sad when you separate them." Supporting research is offered to valid said facts, then there's a free-for-all as the others toss out vaguely related bits on the kickoff fact.

Did you know, for instance, that sharks also have friends? Other topics in this fascinating and funny episode include tiger selfies, dog- and goat-pulled baby carriages, and author D.H. Lawrence who, as it turned out, had a cow named Susan that he wrote about frequently.

This show is like one of those trivia books people used to keep in the bathroom, except No Such Thing As A Fish is a toilet trivia book for your ears.