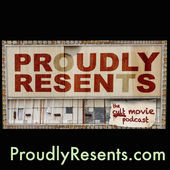 Adam Spiegelman, host of podcasting's Proudly Resents, recently threw the format for his show -- reviewing and rehashing bad "guilty pleasure" movies with guest comedians and commentators -- into a blender and hit "frappé". He's stepped up the level of his guests for most shows and the movie angle often serves as a way to either get into or slide out of the interview.

This episode he invites former boss Todd Yasui in for a chat. Spiegelman works as a TV producer, often putting segments together including pre-interviews with celebrities and other guests. He's worked on a variety of shows and Yasui has been in the talk show game since 1982, when he got drafted onto the fledgling version of The Tonight Show with Jay Leno.

He shares some great stories about the infamous Helen Kushnick, and how she plucked him from his job as a journalist at the Washington Post to becoming a talent coordinator for America's #1 late night talk show.

Yasui went on to become executive producer for Craig Kilborne and Craig Ferguson, as well as Queen Latifah.

Closing out the informative and illuminating less-than-an-hour chat, Yasui and Spiegelman join forces to doubleteam a story about having to pre-interview Bill Cosby for an appearance, just as the controversy surrounding him and the women he allegedly drugged and assaulted was beginning to make the news.

It's a fascinating listen about how the talk show sausage is made.