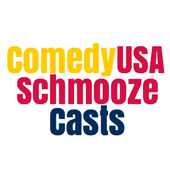 Bringing it old school, New York comedian and former publisher of Comedy USA magazine Barry Weintraub has begun meeting up with comic buddies at a tiny studio that's been built at the Comic Strip to talk about the biz on his Schmoozecast. (To prove how long the Comedy USA concept has been around, there's an interview on the site with Jerry Seinfeld from 1986!)

Weintraub's guest in the most recent drop is John Mulrooney. Mulrooney started doing standup in the late 70's and, like many of his East Coast brethren, heard the siren's song of television and was lured out to Los Angeles during the comedy boom of the 80's and early 90's.

And he ended up doing his share of TV stints -- from appearances on The Tonight Show and taking over the reins of a late night talk show on Fox Television that had been hosted by Joan Rivers, to getting another gig at the same network for two years of hosting Comic Strip Live and many other TV spots as well.

Given their shared history coming up through the comedy ranks of New York, though, it isn't long before Weintraub and his guest are recalling the early days of hell gigs and one nighters (often the same thing) in clubs long gone that once stood within a gas tank's load outside of town.

There are also rollicking tales of shooting handguns outside Las Vegas (Mulrooney is a gun enthusiast) and the sorts of things he's up to now when he's not still popping up on stage along the Eastern seaboard. It seems he's always been a fan of law enforcement, to the extent that he got himself a part-time patrolman gig with a small police force in a town with a name only a comic could love: Coxsackie, New York.

(Note: This podcast is not yet available via iTunes.)

The Schmoozecast review and other podcasts mentioned originally posted as part of This Week In Comedy Podcasts on Splitsider.com.