We are now just a few short months before the midterm elections, after which the coverage of the 2016 presidential election and its attendant frenzy of nonsense and intellectual dystopia will kick in like a boot to your face. This is the perfect time to reflect upon the coverage of elections past, and offer some instruction on mistakes the press should avoid repeating.

And they are legion! I mean, where do I begin? The political media over-hyping an outlier poll to send everyone to the panic station? Or going wall-to-wall on a "gaffe" that no voter cares about? There's the ridiculousness of a primary contender briefly popping to a 3-point lead over the field and being dubbed "the front-runner." Or we can remember those days where everyone loses their sense of proportion and propriety entirely, for seemingly inexplicable reasons.

But no. While these are all mistakes the media should stop making, they are hard to remedy when the root of the problem is the simple fact that most political pundits and cable news blatherers are stunted, intellectually speaking, and have not managed to reach the formal operational stage of cognitive development. It's going to take many years of work to fix these problems. But there is an easy mistake that we can, and should, correct right now. 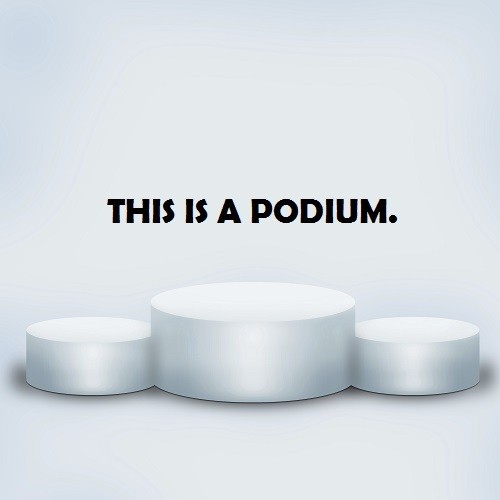 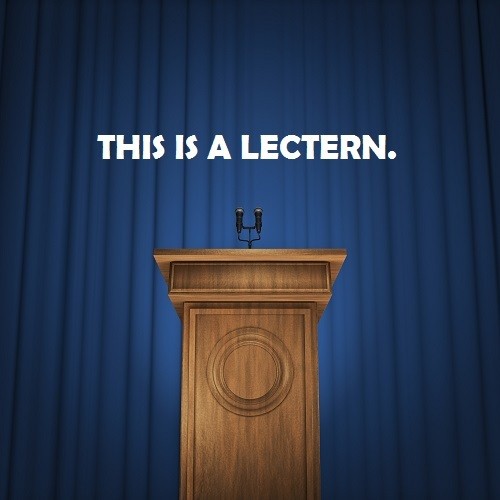 These two things feature quite prominently during political campaigns and election-year events, and they are almost always confused. Stop doing that, everyone! This is easy. A podium is a raised platform, upon which one might stand. A lectern is a sort of reading stand, upon which one might put notes, that one stands behind.

You've seen a podium before. When athletes win medals at a big award ceremony, they stand on a podium. 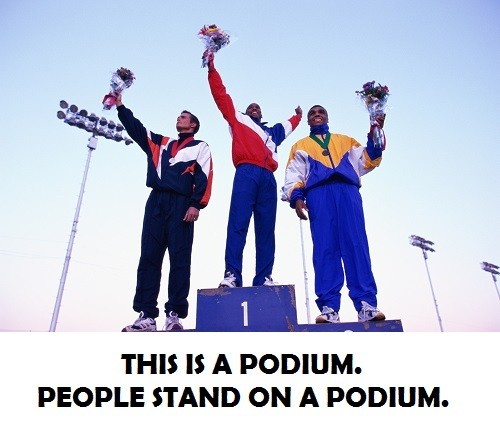 If you've ever seen an orchestra perform, then you've seen the conductor, on a podium. 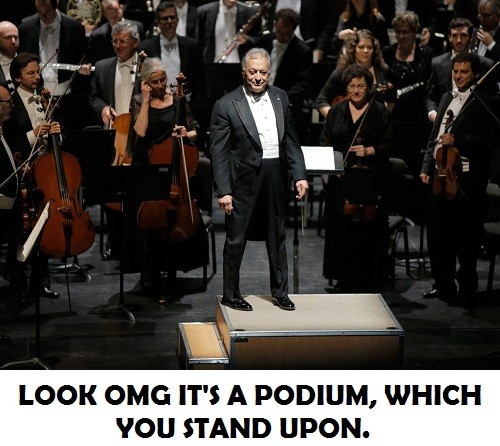 In the picture above, you'll also see a thing behind the conductor, on which his music has been placed. I would usually call this a "music stand," but if you want to call that a "lectern" for the moment, that's fine with me. It helps establish that a lectern is something you stand behind, and that a podium is something you stand upon.

In the image below, you'll see famous track and field star Usain Bolt and his Team Jamaica colleagues preparing to receive their medals in the men's 200-meter race in the London 2012 Olympics. The three athletes are standing behind the podium. 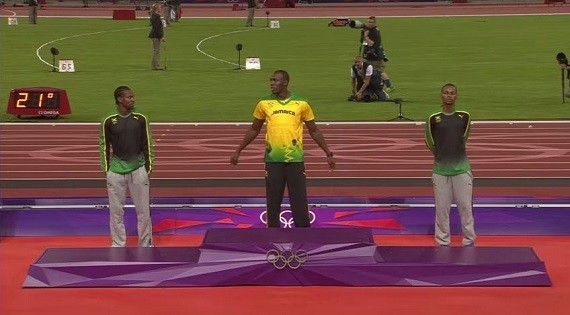 A few minutes later, Bolt and his teammates are on the podium. 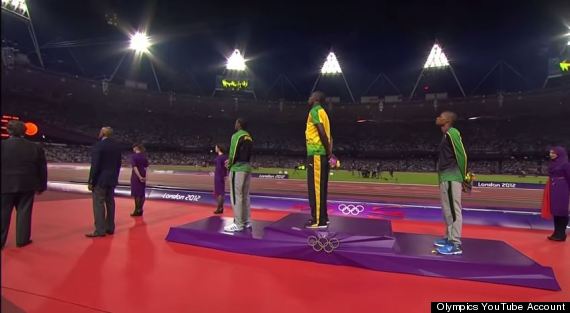 So, you see, you can "stand behind a podium." But if you're saying to yourself, "That can't be a podium! Where is the shelf for Usain Bolt's notes?" then you have confused the podium for a lectern. (Also, Usain Bolt doesn't need notes. Usain Bolt is the truth.)

Right now, you may be wondering, "Well, if you can stand behind a podium, can you stand on a lectern?" Yes, you can! But hardly anyone ever does, because it's a damn foolish thing to do, as you could topple over and get hurt. (For this reason, I wish more American politicians would stand on lecterns, but alas.) 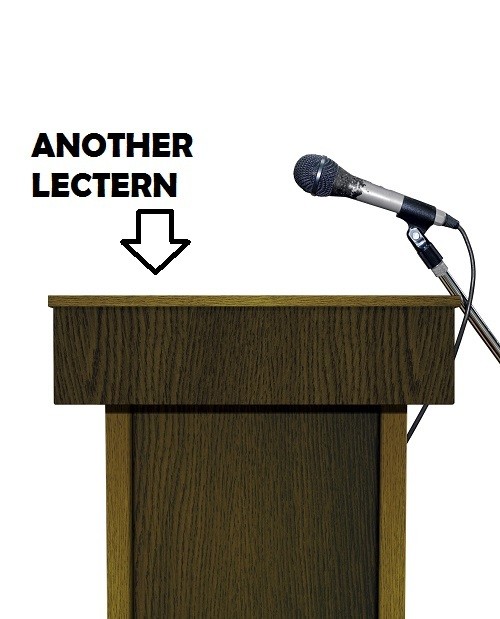 The thing is -- any time there is, say, a political debate, the lectern behind which the debater is standing is often referred to as a podium. Wherever lecterns crop up, there is discord and misrule. For example, here is an article entitled "Jay Carney's new gig: Cashing in on his years behind the podium." Jay Carney has never done anything noteworthy behind a podium. The author means "lectern." 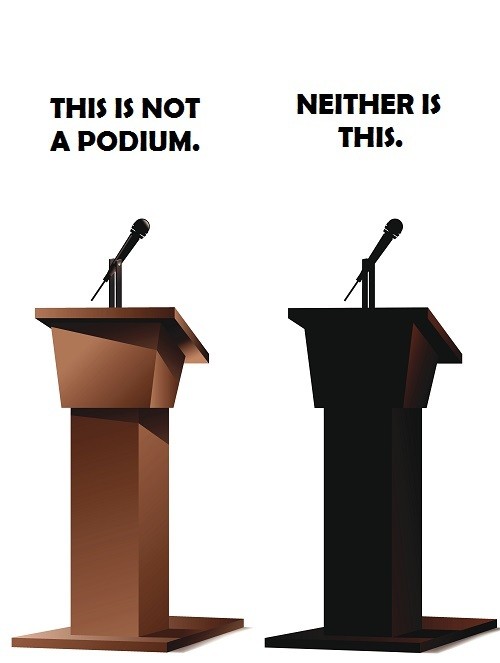 Look, I've made the same mistake. I wrote this sentence: "When Dana Perino took back the press room podium from Health and Human Services Secretary Michael Leavitt this afternoon, she sure imagined herself to be cock of the walk!" That's wrong. I was wrong. Now, I could be really defensive and point out that the White House press secretary, in addition to standing behind a lectern, actually does stand on a raised platform that we can call a podium. But I would be lying. When I wrote that sentence, I absolutely confused the lectern for a podium.

I want to do better, and I have. And now, every political reporter and on-air pundit can be better, too.

Fun fact! Here is an image from one of the GOP primary debates in 2012. In 2016, there are going to be more debates, and more scenes like this. 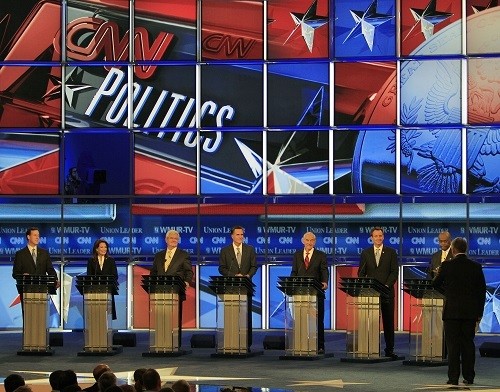 Someone asked to describe a scene like this in 2016 may say to themselves: "Oh, no! I think I need to ask an editor, or consult The Associated Press Stylebook, because I'm not sure what the plural for 'podium' is! Is it 'podiums?' Or is it 'podia?' I'm worried I might get it wrong!"

Now, at some point during your career of always getting "podium" and "lectern" right, you might encounter some smart-ass brandishing this sort of dictionary entry at you. 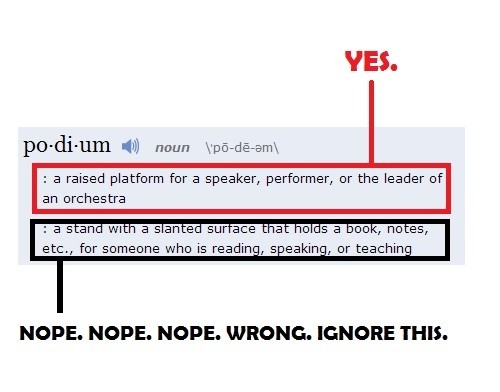 Just ignore this. The only reason that dictionary entries have been adjusted in this fashion is because, after years and years of people getting it wrong, the people who make dictionaries just gave up and got on with the rest of their lives. The same sort of thing happened with the word "literally" very recently. 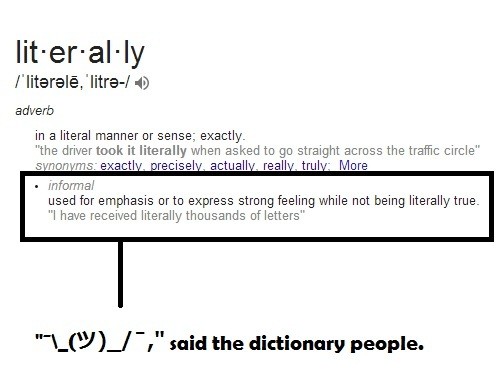 Once you've mastered this stuff, you can graduate to things like "rostrum" and "dais." Here's an old article from David Mezzera of St. Ignatius College Prep in California to guide you on your way.

Okay, that's that! Get this one thing right and we can incrementally improve political coverage and America. The middle class is still basically screwed though, sorry!