If one were to judge by the amount of media attention and press recently the BP blowout at the Macondo site in the Gulf of Mexico nine months ago is a wrap. The report given to President Obama from the National Oil Spill Commission, which was completed on a very tight timeline, provides an overview of the spill and recommendations for ensuring such an incident does not happen again in the future. Unfortunately, due to time constraints, the report did not include or consider a sufficient amount of independent data regarding the short- and long-term impacts of the spill on the ecosystems, marine life, and human health. Independent studies on all aspects of the spill have been hampered by both a lack of funding and the withholding of critical data from researchers by government agencies and BP. Even as the report was released and commissioners holding forums and press briefings along the Gulf Coast, record amounts of crude continue to roll in with the tides. On Thursday, January 13, a record 17,000 lbs of crude was collected from the surf on one small section of beach in the Ft. Morgan area of Alabama.

From Louisiana to Florida, cleanup workers, ordinary citizens, and tourists have been sickened by exposure to the toxic crude and dispersants. In the areas where people live near or are surrounded by the Gulf waters, documented cases of sickness consistent with chemical poisoning related to crude and dispersants continue to increase; specifically southern Louisiana, the Ocean Springs area of Mississippi, and the Gulf Shores/Orange Beach resorts cities of Alabama. Despite medical tests showing high levels of chemical poisoning and physicians reports confirming widespread illnesses, the mainstream media has given only passing coverage to the health issues. The National Oil Spill Commission in its final report to the president likewise gives the health impacts only a passing mention despite the fact that it was a top-tier issue at every public forum the Commission held as Commissioner Frances Beinecke noted recently in New Orleans. 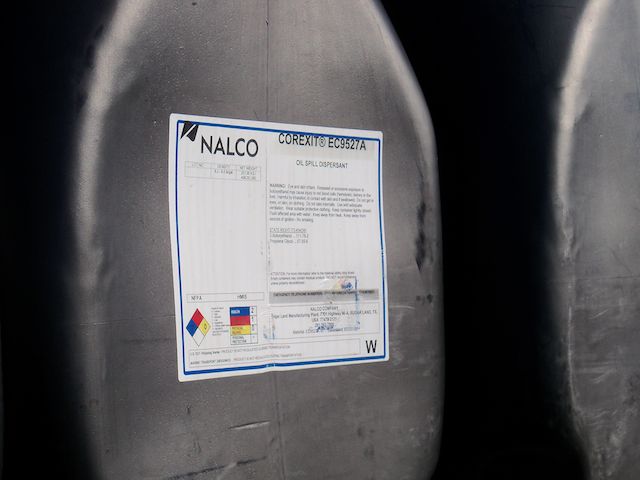 The use of the Nalco Corexit dispersants has been riddled with controversy from the beginning. While the EPA theoretically has ultimate control over their use, a loophole in the National Oil and Hazardous Substance Pollution Contingency Plan (300.915 (d) ) allows the Coast Guard to unilaterally approve their deployment if the spill poses a "threat to human safety." One can not ignore the irony of this justification for the use of Corexit as the dispersant itself is a known carcinogen, causes genetic mutations, and can bioaccumulate, thus posing a health threat to anyone consuming seafood caught in contaminated waters. According to officials, dispersant use was terminated in mid-July. However, Corexit was observed being used and recorded in late October with continued reports of aircraft spraying through December and into January 2011 in Louisiana, Mississippi and Florida.

Below are the Metametrix test results for an 11-year-old boy, Noah, who lives in Mississippi. In late October Noah's mother Lorrie who is a crabber, heard an airplane flying very low over their house. They ran outside and found that the plane had sprayed the area with dispersant on its way out to the gulf. Lorrie and her family drove down to the beach and observed the plane flying in close to shore spraying. In December Lorrie, her husband Bubba, and 11-year-old son Noah were tested for chemical poisoning. The bloodwork for these tests was drawn on December 6, 2010. The levels indicated of toxic VOC's related to crude and the dispersant are reason for serious concern, especially for Noah who tested higher than his parents. He has extreme difficulty breathing, consistent nose bleeds, stomach cramps, excruciating headaches, and problems with short term memory. He, his parents and many others need immediate medical attention and treatment.

Oil Spill Commissioner Don Boesch has steadfastly refused to acknowledge the health impacts on US citizens and continues to defend the use of dispersants. The Spill Commission, during its six-month investigation, received numerous firsthand accounts of sickness and medical reports documenting chemical poisoning. Boesch has repeatedly fallen back on the fallacious argument that because the dispersant contains chemicals found in everyday household products it is safe. The concentrations and amount of these chemicals is the issue, not whether they may or may not be found in household products. It was never safe to deny respirators and protective gear to oil spill cleanup workers working with hazardous chemicals. Nine months after the spill, cleanup crews continue to be threatened with immediate termination should they choose to protect themselves from exposure to crude and dispersants. Workers on the beaches wearing respirators and full Tyvex do not present an acceptable image to the public or media. Allowing them to wear protective equipment could also potentially create legal problems for BP and its subcontractors as a de facto admission that dangerous conditions exist. 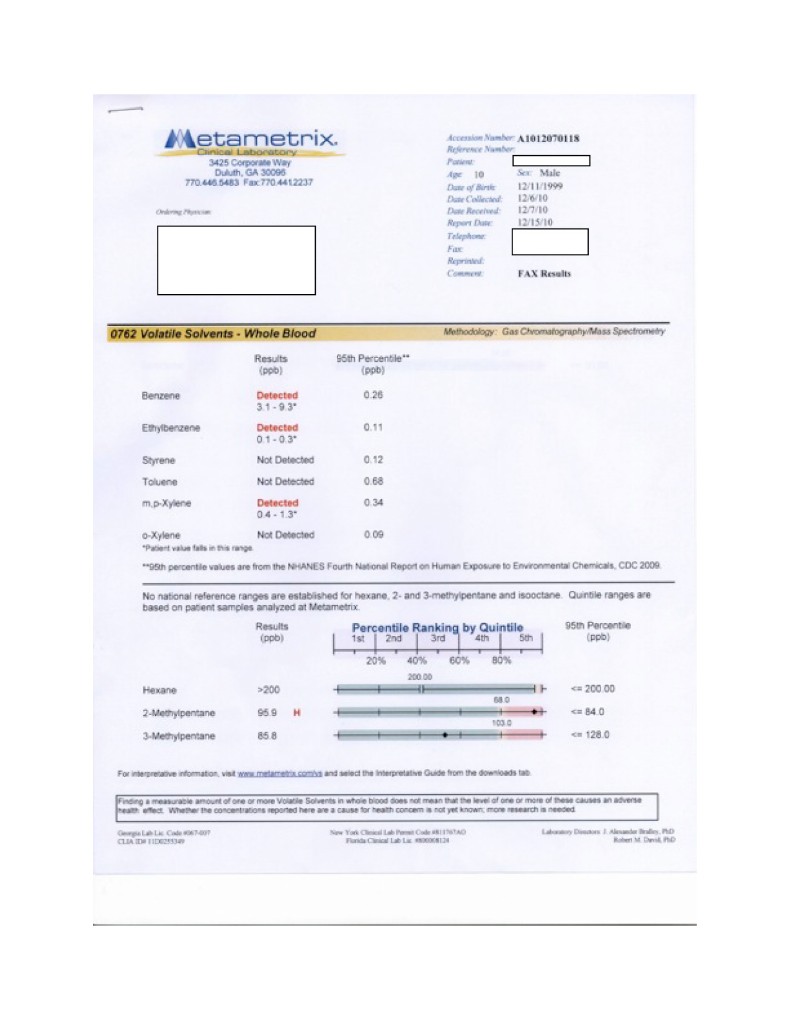 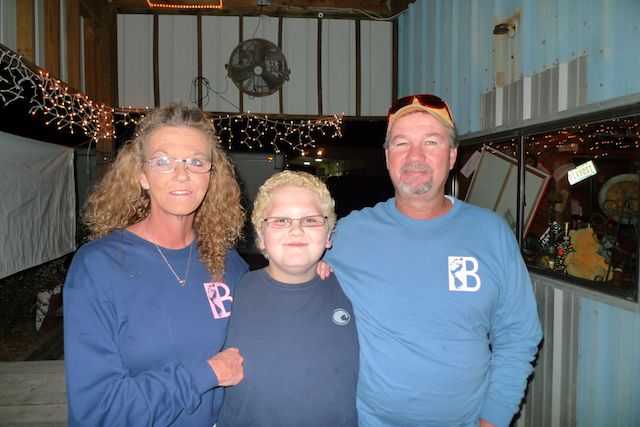 Just this past week Sate Senator A. G. Crowe of Louisiana sent an unusually direct open letter to President Obama requesting immediate assistance in addressing the continued use of dispersants in the Gulf. 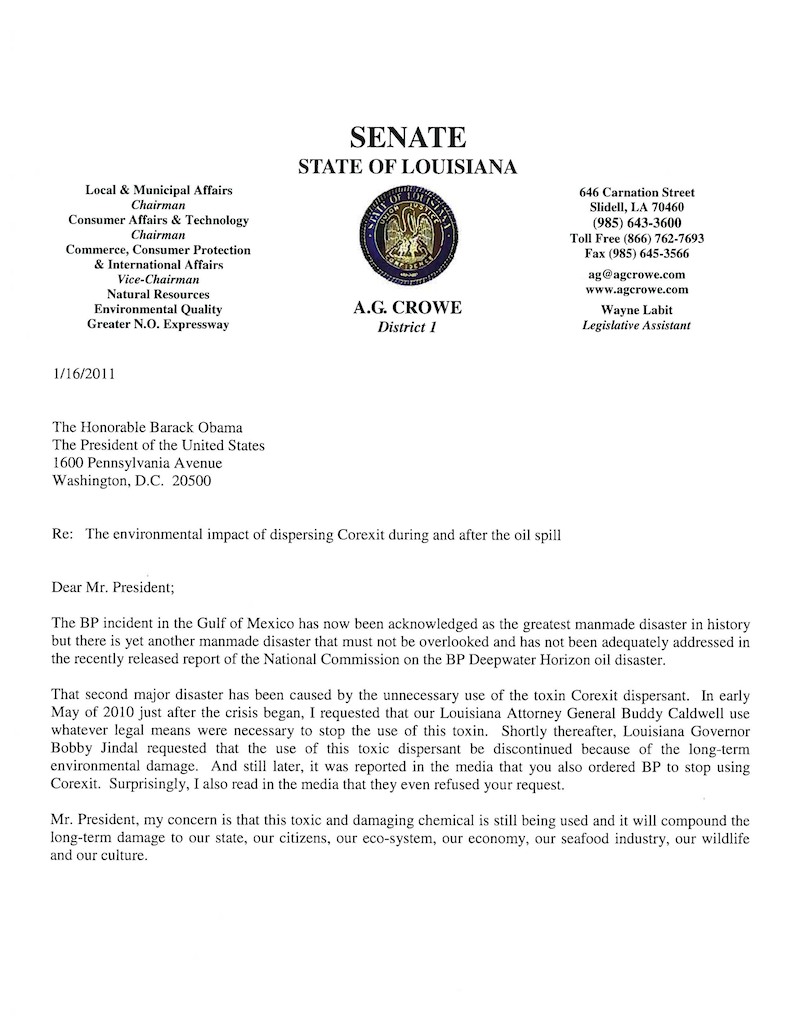 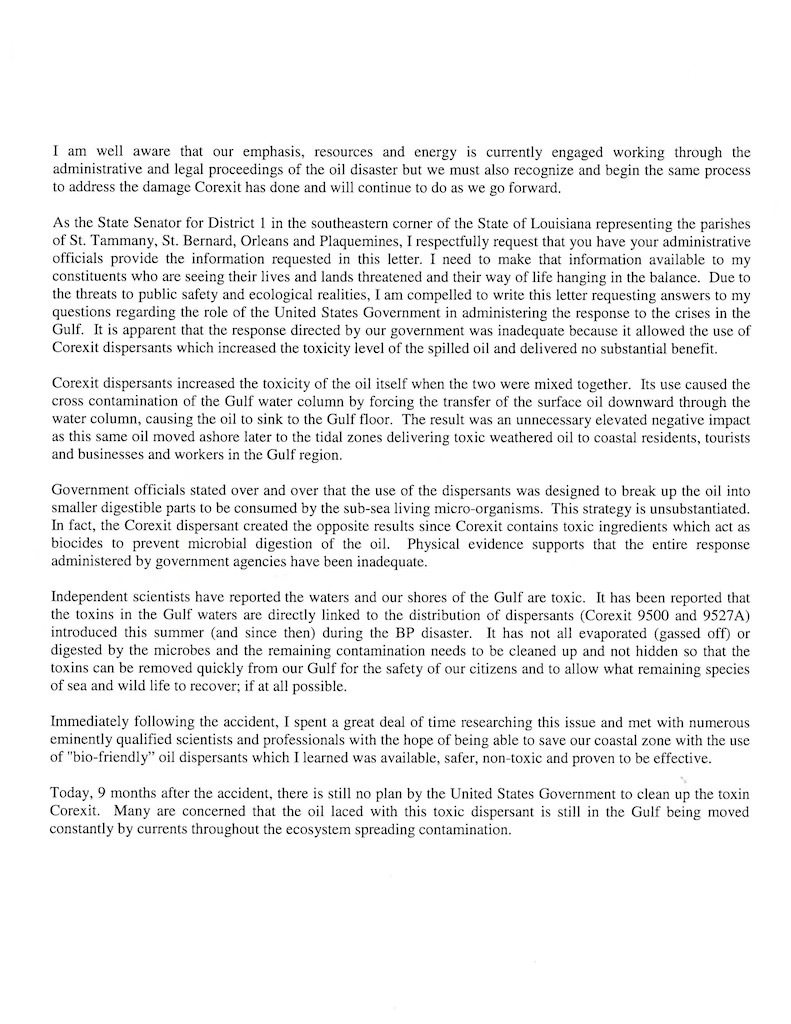 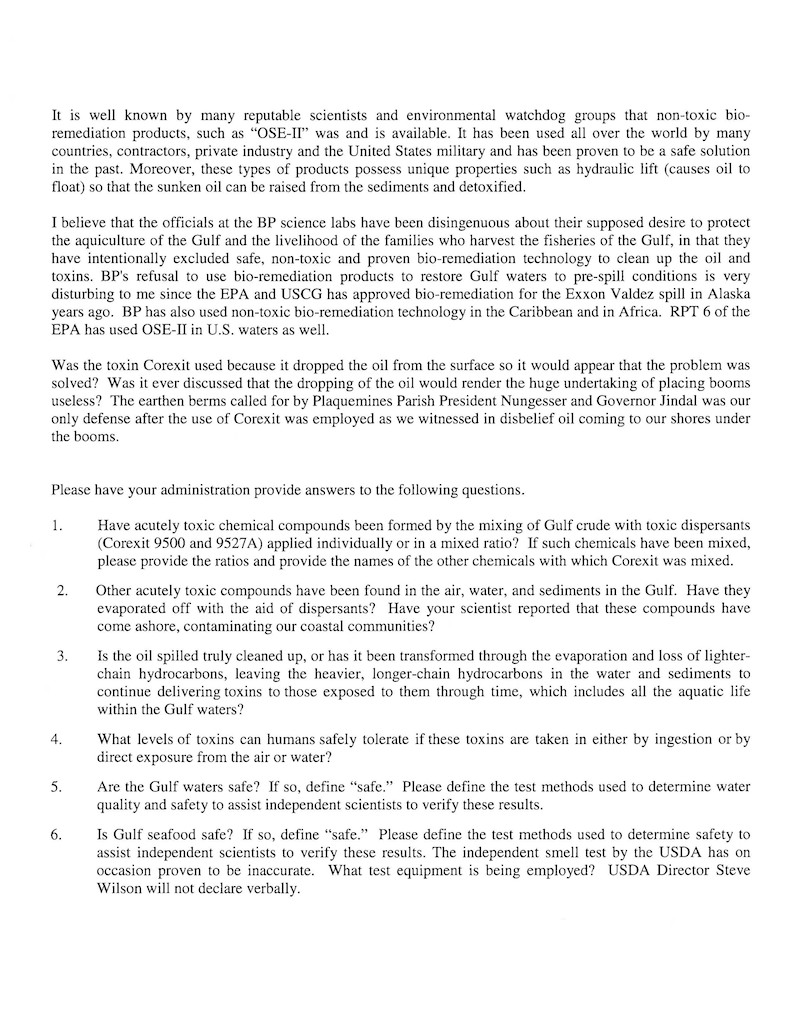 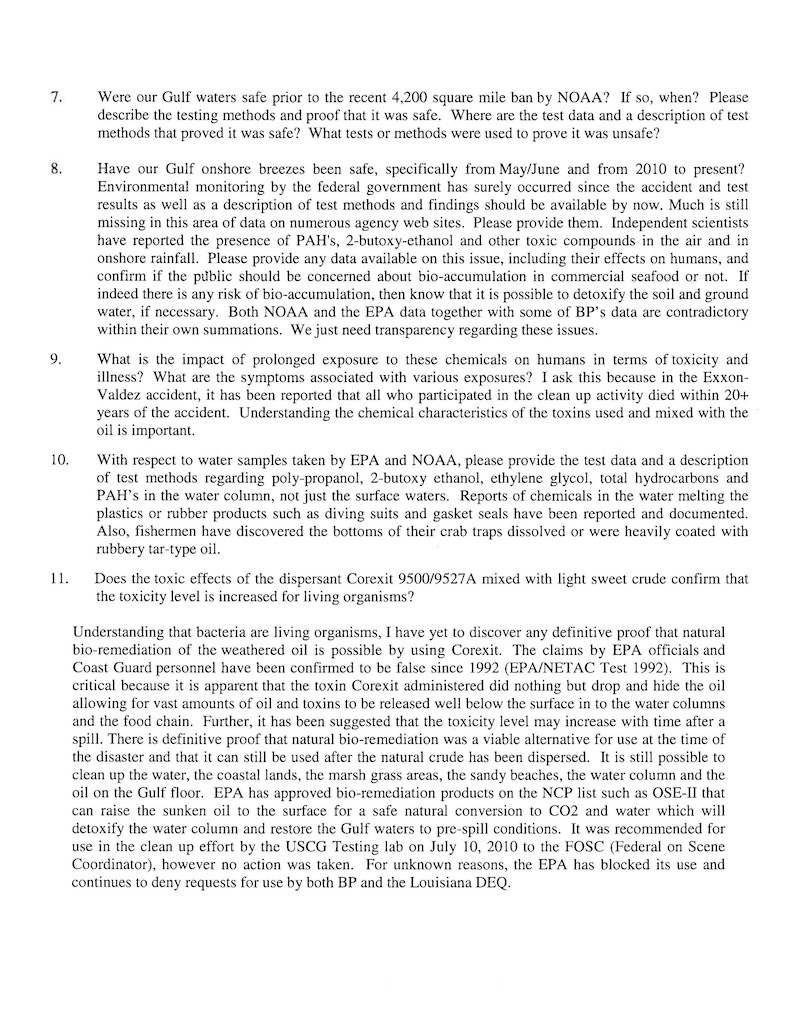 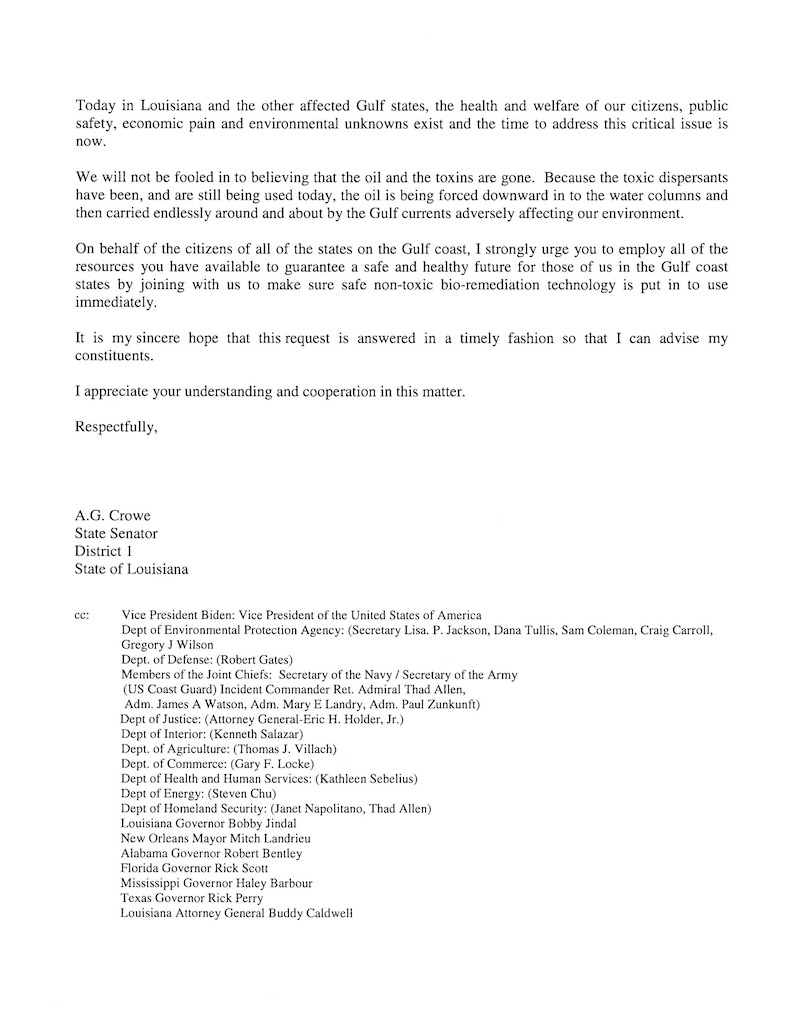 Further detailed information on the Nalco Corexit dispersants and human health may be found at Sciencecorps.org and Riki Ott.com.