In August of last year Graywolf Press released the tenth volume in their acclaimed "Art of" series, this time authored by poet and four-time National Book Award finalist Carl Phillips. While past offerings in the series have concerned syntax, subtext and description, Phillips chose to train his own study on daring -- on the page and elsewhere -- in this latest collection of essays titled: The Art of Daring: Risk, Restlessness, Imagination. The insights -- and questions they birth -- in Phillips' newest book extend far beyond the craft of poetry and serve well to illuminate the intrepid spirit, sexuality and moral philosophy that seem to have informed much of the poet's life and intellect. Characteristically eloquent and honest, Phillips' essays explore notions of desire, suicide and guilt through the lens of poems by Randall Jarrell, Deborah Digges and Thom Gunn, in addition to personal experiences that include witnessing the sexual domination (consensual) of a young man in a forest clearing, and an experiment in sadomasochism conducted with a stranger in a seedy St. Louis apartment building. 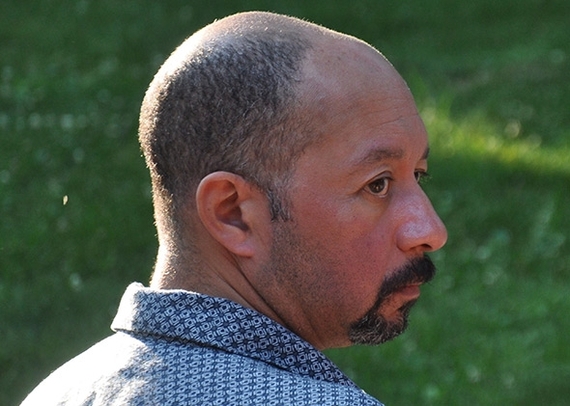 Phillips' chronicles the latter episode in vivid and fearless detail, practicing the very literary daring his book seems to espouse. That Phillips is willing to do so comes as little surprise -- his work has always been about risk, and openness. Deploying an inimitable syntax to achieve lithe, interrogatory cadences, Phillips' poetry has long ushered readers through harrowing ethical ground beginning with his first book, In the Blood, written near the end of an eight-year heterosexual marriage prior to his revealing he was gay. For its intelligence, candor and sheer beauty Phillips' writing remains among the best being done today. I was fortunate enough to speak in depth with him recently, not so much about poetry, but about life and living. The first three questions from our discussion can be read below. The interview can be read and listened to in its entirety on Fogged Clarity's newly redesigned website here.


Ben Evans: I think, your own sense of restlessness, your need for meaning, is a palpable driver of this entire collection, as it should be, given the subject matter. And part of that unrest appears to emerge from a desire or need to justify moral relativism. I wonder if this is accurate, and what you might name as the genesis of that need, if it in fact exists?

Carl Phillips: I know that a lot of what I seem to write about in my poems is about risk, especially sexual risk, and in the beginning it seemed sort of edgy. I found it odd but exciting that people were drawn to the work because it seemed to push against moral assumptions about sex in particular and about fidelity in relationships. And it took me a while to start questioning that -- it seems an easy thing to say -- and then when you actually find that you've cast aside all kind of moral boundary markers, then what? There can be a kind of lostness that it seemed to me was hard to account for or to stand proudly behind. So, I think the essays, the final one especially, was a way of taking stock of what does it mean to espouse certain views and then to maybe have found that one has compromised their own moral standards, and gotten into some trouble once in a while. And also what's the responsibility of a writer? Should we be saying these things and encouraging people to live on the edge and take risks, and at what cost? Is it true that's what makes an artist, someone who always takes risk? And what kind do they have to be? So those were all the questions that seemed to swarm around the book.

BE: And like you say in the book: Poetry is a means of better identifying & clarifying that which we don't know, rather than a vehicle toward some grand truth.

CP: Yeah, but I think that that's part of the problem. I think some people would rather not know the things that they don't know. And I think there gets to be a point in life where that may be true. I think it can be disturbing to find out things about oneself and sort of wish they weren't so. But to me I still think its worth it to have written one's way towards that space, but I understand the sense of disorientation and sometimes dismay that can result.

BE: Yeah. How much of your own poetry, of your own intellectual exploration has been an attempt to reconcile the repression & uncertainty you may have experienced in the 8 years you spent in a heterosexual marriage?

CP: I wrote the first book while I was in a heterosexual marriage, and I think it entirely came from a sense of guilt and...I don't know, I want to say times were very different back then, in the 80's, but maybe I was just naive. Certain things never occurred to me, like: that one can get divorced and that it's ok. It seems to me that was a way to ruin a person's life. But on the other hand, then what to do if one learns in the course of being married and supposedly straight, if one realizes one is gay instead? And it seemed, to be honest about that would be heartbreaking for the other person. So to me it seemed one of those irreconcilable problems and, I don't know, at some point I've said that it seemed as close as I've gotten to being suicidal, because it seemed that that might be the only real way out, rather than what now seems to me the obvious thing to just sort of be up front with everybody and understand there'll be some hurt, but one should live honestly. And for me there wasn't this option of living a closeted existence the way many gay men do because, I guess, it just seems wrong. Honesty seems important. But it is true that I started trying to rationalize ways in which maybe it wasn't dishonest, if, say if one was having sex with another man outside of a heterosexual relationship then it wasn't exactly cheating in the same way. And I think a lot of closeted men rationalize things in that way. For me, the poems became a way, I think, to speak to things that were almost unbearable to acknowledge to myself, if that doesn't sound too melodramatic.

To read or listen to the rest of this interview for free please visit Fogged Clarity.