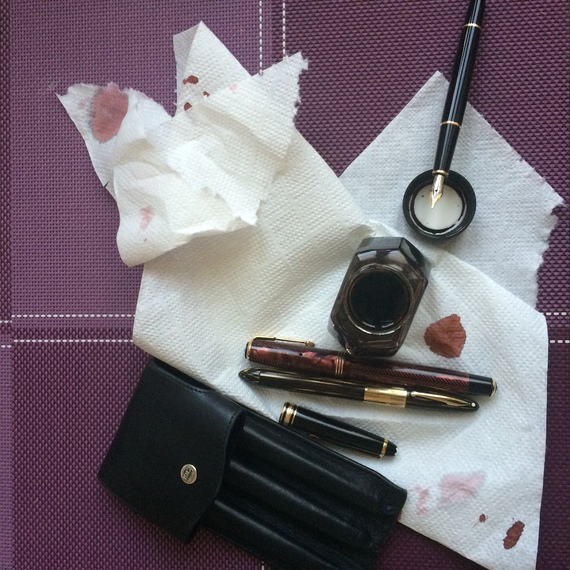 Poetry has the logic of memory, the spontaneity of dreams, yet is much like calculus--each line is, in a sense, an asymptote composed of and continually approaching the limits of language in an attempt to reach an infinitesimal, wordless realm. This is also one way of saying that a good poem is unpredictable and has something at stake. We teachers get our fair share of student poems about puppies, sentimental love pains, the general first person loving the general world and wishing for general peace and universal happiness. Poems that could be about anyone doing anything anywhere at any time. But poetry shouldn't run in place--it should be running towards a wall and then through it. Sometimes be specific isn't enough advice.

This year I'm teaching creative writing in English at Transilvania University of Brașov (and yes, it's really in Transylvania). My students are doing something regularly that seems nearly impossible to me: writing poetry in a second, sometimes third language. A few weeks ago I asked them if they knew what "at stake" meant. They didn't. We broke it down, delved into etymology: a pole, a stick. We discussed "burned at the stake," "impaled on a stake" (the latter is easily understood in Romania, whose history includes the likes of Vlad III of Wallachia). Sometimes language requires demonstration. I placed an assigned printed poem on the table, then held a mechanical pencil above my head. I stabbed the poem, pinned it to the table, tore a ragged gash through the middle of the page. I asked them to give me some words to describe what this poem just went through. Risk. Danger. Limit. Loss. Yes.

Last year I taught composition at a women's prison through Boston University's Prison Education Program. These students have everything at stake every single day. My sister, who has been incarcerated on and off for years, taught me that there are no words for how essential writing is in prison--especially poetry. "The art of losing isn't hard to master"--one evening I wrote this famous first line of Elizabeth Bishop's "One Art" on the board. We were about to read Hamlet, and I was introducing them to iambic pentameter. Who taught you that? said one student, and, when I asked what these two words made them think of, another said, iambic contamination. To overthink the language we use naturally could indeed contaminate its fluency for a moment, but it also may create new paths of clear, precise expression. Sometimes a path is a form.

Poet Jill McDonough, who taught incarcerated college students for thirteen years, visited my class one night and discussed how the villanelle is a great form for expressing circular thoughts and obsessions. Things that matter. The following week, over half the class turned in handwritten villanelles ranging from the desire to cook a single meal at home, the irony of having to sew American flags, the simple act of being able to shave in privacy, the feeling of having more than a monitored visit with a loved one. And, here's the best part: these villanelles hadn't been assigned. What was at stake formed a need to rethink the rhythm of language, choose the right rhymes, write these poems.

The short version of that semester's final paper was to diagnose Hamlet's madness and its significance, and to back it up with the text. The last two weeks, one of my most engaged students was absent. She was in solitary confinement, a place meant to drive anyone to temporarily lose a mind. (And this is where it's hard not to hijack my own blog post to write about the inhumanity at the core of our country's swollen prison system.) The night the papers were due I opened my desk drawer to find, covering the attendance sheet, several sheets of mismatched paper with a handwriting in pencil I recognized. This student, in solitary and without access to the book, somehow managed to write a paper that worked through the entire tragedy. (She even improvised a works cited page complete with Jane Doe Publishing Co.) And, the surprise ending: though the stakes were high, Hamlet hadn't lost his iambic mind after all. His logic--much like that of poetry--was driven by memory, was spontaneous yet calculated.

There's only one poem I can think of that comes close to defining the essence of poetry, and in it there's a literal stake. It's Heather McHugh's "What He Thought," and at the end, Giordano Bruno, in an iron mask, is being burned at one in Campo de´ Fiori, 1600: "poetry is what / he thought, but did not say." This is the definition of poetry at risk: it employs the limits of language, endangers the realm of the comfortable, approaches a silence or loss we feel yet can't explain.