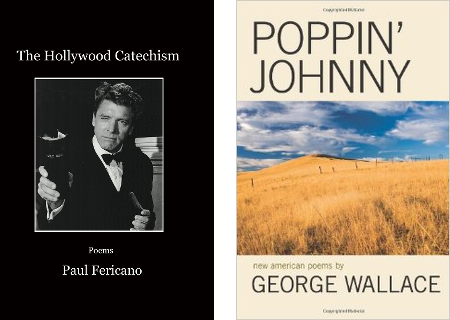 ...the only people for me are the mad ones, the ones who are mad to live, mad to talk, mad to be saved, desirous of everything at the same time, the ones who never yawn or say a commonplace thing, but burn, burn, burn like fabulous yellow roman candles exploding like spiders across the stars.

-- Jack Kerouac, On The Road

In his newest collection, Hollywood Catechism, San-Francisco-born poet Paul Fericano sweeps up humor, irony and deep feeling in a winning trifecta. He takes the materials of popular culture -- from Elizabeth Taylor to The Three Stooges -- and makes of them something transcendent. Fericano rewrites Catholic liturgy, as in "The Director's Prayer", which begins, "Our Fellini / who Art in Carney, / Clooney be thy name," and ends not with "Amen" but, "Cut."

Yet, it is not all fun and games. For Fericano, founder of a support group for survivors of clergy abuse, male sexuality is inherently tied up with violence. A form of re-empowerment comes through satire. Master of the one-liner, Fericano sometimes delivers punch lines as titles, such as, "A Direct Correlation Between the War On Terror and the Proliferation Of Penis Enlargement Spam," and the chillingly prescient (a la Ferguson), "Thirteen Ways of Looking at a Black Man."

The poet also simultaneously admires and appropriates both Hollywood stars and famous poets, cutting everyone -- affectionately -- down to size. Obsessed since boyhood with the Three Stooges, poetic slapstick inhabits these poems in line after line that both hurts and makes us laugh. Indeed, Fericano may be said to be pulling off his own aesthetic -- "stoogery" -- delivered with same affection and dismay as the fool in King Lear's court.

These are poems that read like the messages in a bottle that might be written by the last sane man on Earth, when everyone else has gone mad.

In Poppin' Johnny, Long Islander George Wallace's poems explode on the page. Like the cartoon call-outs when Batman hits a bad guy in a punch-up scene, these poems are loaded with "pow," "bam," "biff." But, for all their muscular gestures, these poems also convey sensitivity and irony -- sometimes at once.

As much as Wallace has been called an inheritor of Kerouac, his heady and ecstatic proclamations can also be traced back to Whitman. Consider these lines from "Starlight! So Much Starlight":

the coffins of the mad. i saw

starlight in the eyes of a dog.

i saw a man with a tin badge

he wore starlight on his chest.

handcuffs have it electric lights

have it window shades drawn

These are poems obsessed with cars and dames, liquor and baseball. But beneath the brass-band bravado lie the horrors of "My First Dance" -- shaking a grown man's enormous sweaty hand, being pinned and kissed by a fat girl, drinking punch from a paper cup and sympathizing with the "four-legged madness of a dog / who was trying to do nothing more / complicated than just get away."

Yet even the most intimate moments are told in a vernacular slant, like when the speaker realizes in "How it Worked" that his lover is kissing him goodbye for the last time, and says:

i laid there like a pizza delivery guy with too / many pizzas to deliver who has fallen off his bicycle and / onto some wet pavement. i laid there like bambi on ice, / like flipper on a plate, and i looked back at her like roy / rogers trying to figure out what is wrong with his faithful / horse trigger.

These are poems as rough and vulnerable as manhood, as full of hope and heartbreak as the New World.

You could drive Route 66 from coast to coast to get a feel for the poetry of America. Or you could pick up copies of Fericano and Wallace, and read these poems out loud.

Portions of this article first appeared on robertpeake.com