Kätlin Kaldmaa is an Estonian poet, writer, translator and literary critic. She has published four collections of poetry, two books for children, an autobiographical work of non-fiction, and a novel. She has translated over 40 books into Estonian by authors such as Jeanette Winterson, Aphra Behn, Michael Ondaatje, Ali Smith, Goran Simić and Gabriel García Márquez. Her own poems have been translated into Arabic, English, Finnish, French, Galician, German, Korean, Latin, Japanese, Russian, Slovenian, Spanish and Turkish. She is the President of Estonian PEN.

Kaldmaa's collection, One is None, translated into English by Miriam McIlfatrick-Ksenofontov has just been published by A Midsummer Night's Press as a part of its new Periscope imprint. Recently, I talked with Kaldmaa about her work as a poet. 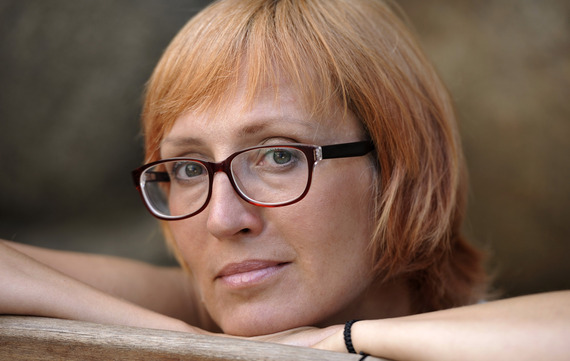 Enszer: Kätlin, tell me about your work as a poet and writer.

Kaldmaa: As one can easily see, I have translated much more than I have written. My first poetry book was published during the collapse of the Soviet publishing monopoly. At that time, nobody knew what was going on and nobody knew when and where books were published. The book was part of a series of six young poets, the last volume. So this book's beginning was not auspicious.

After becoming a young mother, life took over, and I began translating. Translating is the best replacement for writing, though sometimes it is too easy to take that path. It takes courage to turn back to writing. I love translating, however; it is the best creative writing school ever.

At some point I took back my life and started writing down all those poems that were neatly stored away in the drawers of my mind. One might think I wrote like crazy, a couple of poems every day, but I was simply converting the existing non-visible poems into visible files.

I am not a word poet; I am a poet of ideas. There is a clear distinction between those two. A poem first appears as a cloud behind my back; it literally keeps chasing me until it forms and gives me permission to write it down. Sometimes, there is more than one cloud following me. It can grow really heavy. It's like a hungry bear; it can kill dogs.

I also write short stories and have written a novel. Short stories are somewhere between a poem and a novel. They need much more time than a poem, and it is harder to pin down the narrator. They also have to be very exact. Working on a short story, I spend a lot of time deleting extraneous material. Delete, delete, delete. Writing a novel is the hardest of all. It took me three years to write my novel. It takes place during the entire twentieth century and includes multiple narrators and protagonists across five generations. It was challenging, but I loved the process. With the next novel, I'm taking it easy as I'm only writing about two years (1976-78), but it's already going to the darker side of things. One never knows.

Enszer: The poems of One is None are so fierce and sharp and devastating (the final observations on the Swiss lover continue to haunt me). Tell me about writing these poems.

Kaldmaa: Yes, the Lover series. It always catches reader's attention. People truly think I've had all these lovers (there are more than in this volume); lovers from Afghanistan to Switzerland and all the countries that lie between. These poems took shape over time. They are poetic portraits of many, many people one meets or hears stories about.

"My European Lover" is all about people living in exile, coming from wherever there has been a war. "My Swiss Lover" is about people growing up in a very safe country, where there has been no war for a long time. These poems change one's perception of the world. After a while, you start seeing the contradictions in the worldviews of these people. They really have no idea how the rest of the world lives. They live on top of their mountains. Sometimes, they look down and say: "Change, World! For the better! Because I so say!"

"My Icelandic Lover" differs from those two as this expresses my love towards three countries that are somewhat similar yet also somewhat different: Estonia, Finland, Iceland. I love Iceland and I wrote my first novel about Iceland.

I wasn't actually planning to write these poems. I fought hard against them. I was writing a novel, not a book of poems, but they grew strong, those lovers. They forced me to write them, literally, and they ended up being part of my last poetry collection, which I wrote simultaneously with the novel.

The sharpness you're talking about is inherited from my paternal grandmother, who was a tough, resilient, tiny woman. Clarity of thought becomes more and more important as years go by. There is no time to hide. My first poetry book was described as baroque. There were many, many, many words in there. Everything was hidden behind the plenitude of words. One had to be a really good spy to spot the idea in there. Not any more.

Enszer: Your poems in One is None are boldly sexual and sexually assertive, but ultimately sex operates metaphorically for love. Is your intention initially sex or love? Tell me a bit about your encounter as a poet with the lyric moment.

Kaldmaa: Sex, ideally, accompanies love. As a woman, it is still rather difficult to write about sex. At one festival I was asked to explain what a blowjob is by an older lady who was reading the translations of my poems. There are too many taboos in literature. This is one of them. I made it a rule to write something to do with the bedroom business in the series of lover poems, the Icelandic one being the exception. A couple of months later, I was writing a short story and I realized the structure of the lover poems had creeped into my prose. So I knew there would be sex. I sort of froze and could not finish it for months. It's almost the only time when I rewrote and rewrote and rewrote a scene. I did finish it, I wrote the sex scene and that was thanks to my friend, Canadian writer Karen Connelly. It's good to be able to talk about these things. Taboos.

Love. It's always love. Behind every action there should be love. Love within. If there is no love within a person what can s/he give to the world?

Enszer: What is the significance for you of having your work available in English?

Kaldmaa: Last summer I was in Greece with some friends and one of them always introduced me: "Look at this person. Take a good long look. This is the only Estonian you are probably ever going to meet. There are less than a million of them. Imagine, less than a million!"

There are less than a million of us. There is a chance my grandchildren will not read Estonian. So of course, it is important. It is also important, as now many of my friends can actually read what I write. As a translator it is interesting to work together with another translator and see what happens to your work. It's great to be able to see the subtle changes that happen in saying the same thing in another language. As I said before, translating is the best creative writing school ever.

What will be interesting to see is what will happen to my image as a poet as my poems are translated. Every part taken out of the whole has it's own nature. I had an interesting experience when my poems were translated into French. I know what it means to translate, so I gave the translator the freedom to choose whatever poems he wants. I told him, "I definitely want to read this and this and this, but the rest is up to you." One day, I was going through the poems that he selected and it suddenly occurred to me that according to my French translator I am a naked tea-drinking sex maniac. Being a French man, he had chosen the poems where there was nakedness, tea-drinking (I do not drink coffee), or sex. No wonder I had followers!

Enszer: Is there anything else that you would like the English-language audience to know about your work?

"The Hatred of Love"
from One is None by Kätlin Kaldmaa

It may well be that the man I'm sleeping with now
really would like to kill me.
They should pool their money
it would work out cheaper.

This is the second in a four part series on A Midsummer Night's Press's Periscope imprint. Read the first installment here. For a limited time, readers can order the first three Periscope titles for just $25 with US shipping included.