Fall 2010 has been a great season for poetry. There are important retrospectives of H. L. Hix's remarkable career and that of the leading Arab poet, Adonis; new work by exciting young African American poets Thomas Sayers Ellis and Major Jackson; politically charged poetry by C. D. Wright and Anna Rabinowitz; late-career flourishes by veterans Paul Muldoon and Charles Simic; engaging experimental poetry by John Taggart and Julie Carr; and solidifying entries by poets of international stature like Kamau Brathwaite and Wislawa Szymborska. There's much to be excited about, and these selections give a fair indication of the presses putting out the most important poetry of the day and the degree of vitality of various poetic styles.

PHOTO GALLERY
The 20 Most Important Poetry Books of Fall 2010
Download
Calling all HuffPost superfans!
Sign up for membership to become a founding member and help shape HuffPost's next chapter
Join HuffPost 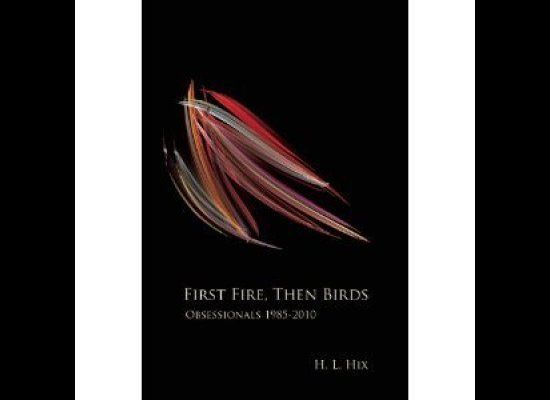 1 / 17
H, L. Hix, 'First Fire, Then Birds: Obsessionals 1985-2010' (Etruscan Press)
<strong>Exemplary Lines:</strong> "There is no wealth without character. / As we prepare our military / the important thing is to restore / confidence to the economy. // To be a patriotic American / we must love our neighbor. / These people,...they're poor, and they're downtrodden. / There is no wealth without character. // Help a neighbor in need. I do. / To be a patriotic American / we take lives when we have to. / We worry about weapons of mass destruction. // We're a compassionate nation, / and so we're on the hunt. / We're going to chase them down one by one / so long as I'm the President." ("July 2002") These lines are reassembled from George W. Bush's speeches, of course. Who knew there was so much "poetry" in authoritarian mumbo-jumbo? H. L. Hix is a poet everyone should know about. In "God Bless: A Political/Poetic Discourse" (2007), consisting of two sides of the war of civilizations, Bush's muses counterposed with the infidel's complaints, he showed that poetry, if in the demonic sense, is inherent in every human discourse. Borrowing from these discourses--whether in the arts or sciences, canonical literature or modern jargon--and arranging the material to find the fissures between them, and thus exposing us to what is truly human (and also inhuman) about us, is Hix's specialty. He's one of our most daring poets, his oeuvre a rebuke to timidity, apathy, and retreat in any of its manifestations.