A bestseller less than a month after its release, Daniel Arenson's military science fiction novel Earth Alone is full of soul. Set in a horrid dystopia in which Earth has been devastated by alien invaders, the book is about the humanity that shines even in a time of privation and war.

When the protagonist, Marco--soon to be nicknamed in his unit as "the Poet"--is drafted at the age of eighteen, he loses the life he once had...but along the way finds himself. Earth Alone is about war, but most of all about friendship and heartbreak. Marco's unit is populated with compelling characters who are the true focus.

I spoke with Daniel about his rise to success as an indie author, the inspiration for Earth Alone, advice for indie authors, and more. 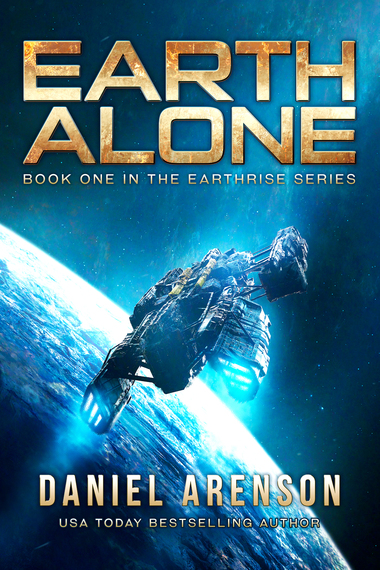 You've shared your story of how you became an indie publishing success with me, and it's an inspiring story. Will you share it with readers?

I started writing as a teenager in the 90s. I wrote two or three novels, none good enough to find a publisher. Mostly I honed my skill by writing short stories. It was 1998, and I was eighteen, when I sold my first story. It was titled "Worms Believe in God," and I sold it to a science fiction website for $20. It was an amazing experience, actually being paid for something that I had written. Over the next few years, I sold a bunch of stories and poems to small websites and magazines.

In my early twenties, I moved to Toronto--alone, a bit clueless, and broke. I worked a "pay the rent" day job, but I kept writing on the side. I was obscure. My career consisted of several story sales to little genre websites, a handful of poems sold to small poetry magazines (as you can imagine, no huge distribution there), and a fantasy novel hardcover from a small press. The hardcover was probably the biggest success, though even that was small; we sold fewer than a thousand copies. I wanted to make it as a writer, but the industry was tough to break into (this was before ebooks were popular), and what I was writing wasn't commercial enough.

In early 2010, just before my thirtieth birthday, the Kindle ereader arrived in Canada. On a whim, I took my old fantasy novel--the forgotten hardcover--and uploaded it to Amazon as an ebook. And something amazing happened. It started to sell. Just a handful of copies, yes, but enough to buy me lunch every day.

To me, that was terrific. I wasn't poor anymore, but I wasn't particularly rich. I was single, renting a 480-square-foot apartment, and had no car or savings. I ate a lot of ramen. At thirty, even with a day job, I didn't have much hope of ever affording a house, a wife, or a car, especially not in pricey Toronto. To actually buy food with writing money was amazing.

So I dusted off a couple other old fantasy novels, ones that had been collecting cobwebs in the depths of my hard drive. I uploaded them to Amazon too. And they too started to sell a handful of copies a day.

Despite these encouraging seedlings, I was still obscure. Still not earning enough to even dream of quitting my job. I knew I had to do something different if I wanted to turn this into an actual career, not just a "lunch money" hobby. So I studied the works of some of the popular fantasy authors at the time. They were doing things differently. They were writing series, not standalones like me. They had better covers. They had more action in their books.

I decided to write a fantasy series--and a commercial one. I wrote in crowded subways at rush hour, scribbling as I stood crammed between thousands of commuters. I wrote during lunchbreaks. I wrote in elevators. I even wrote while I walked down busy streets, rushing to work. I took a vacation and wrote on my Ikea futon for two weeks (my apartment was too small to fit a desk).

Finally, I had written Song of Dragons, a fantasy trilogy full of action, sympathetic heroes, nasty villains, and of course--dragons. It wasn't a literary masterpiece, and I've improved my craft since. But damn it, I still think that trilogy is tons of fun, deeply emotional, and solid storytelling.

In 2011, I uploaded Song of Dragons to Amazon. It was the break I needed. Rather quickly, it sold a quarter million copies. I was able to buy a house, buy a car, quit my job, and become a full time writer. I've been writing full time since.

You pitched Earth Alone to me as being inspired by your experiences in the Middle East, something which you knew would interest me, since I've lived in Israel. Which aspects of the novel are closest to that experience?

Of course, this is fiction, it's set a century in the future, and the villains are nasty space-bugs. But despite the futuristic setting, I wanted verisimilitude. I didn't want to write about brave action heroes who spew one-liners as they blast aliens. I wanted to write about those who, throughout history, have fought most of humanity's wars--not emotionless G.I. Joes but drafted teenagers, just scared kids. I wanted to write about their fear, the dumb jokes they tell to hide that fear, their coming of age under fire. I wanted a novel that wasn't just about lasers and space action--but also about the blisters on your feet, the bad food in the mess, the propaganda, the camaraderie, the tearing apart of the soul. About missing home. About running from missiles but also surviving the military latrine. About facing ruthless enemies but also those tears at night when nobody is watching.

It's science fiction, but if I did my job right, the book captures the grittiness and absurdity of real war.

Was it a cathartic experience, writing this novel?

It was. Some of the anecdotes in the novel actually happened to me!

The world in Earth Alone is darker than dark, an apocalyptic hell with few joys or beauties. Can you talk about that choice?

Before writing Earth Alone, I wrote a science fiction series titled Alien Hunters. That series is pure joy, color, and light. It's Guardians of the Galaxy meets Futurama. There's very little darkness in Alien Hunters. I had a blast writing it, but with Earth Alone, I wanted to write something more serious. It's a war novel, so by its nature, it's dark. But I think there's a lot of joy and light in Earth Alone too. There's humor, even if it's sometimes gallows humor. There's a love story. There's light in the shadows.

It's post-apocalyptic, with Earth still reeling from a devastating alien assault. But it's also about humanity's nobility, courage, and hope. It's not just about human death and suffering. It's about humans fighting back and believing that the world can be good again. To me, there's some comfort to that theme. Even following genocide, we humans are good at rising again from the ashes.

What are your plans for the series?

The first three novels in the Earthrise series--Earth Alone, Earth Lost, and Earth Rising--contain one story arc, the war between Earth and the aliens that attacked it. Earth Lost will be released this summer, and Earth Rising will follow soon after, concluding the story that began in Earth Alone.

But I hope that the series will expand beyond three books. The first three novels are about a terrible war against an alien species. In the future, I'd like to write more Earthrise novels--these ones about what happens to soldiers when they finally go home, when they face an entirely new enemy, an enemy that lives within.

I already have drafts for the second and third books, and they'll be released soon. My ideas for the following Earthrise novels are still nebulous, but I can imagine the series expanding to include a new story arc.

The book has been out less than a month and is already an Amazon bestseller. What do you think has people responding so powerfully to this book?

Today we find ourselves at a crossroads. Like never before, our species faces existential threats. Global warming, nuclear weapons in violent hands, runaway AI, fracturing societies--all threaten to undo everything that we've built.

Once we gazed into the night sky, and we were optimistic. We imagined ourselves colonizing the stars. Science fiction authors described future utopias, futures in which humanity conquered space. But today we look into the sky, and along with the starlight, we see the darkness. We're afraid. We're afraid of one another, afraid of the future of our planet, afraid that we'll never sail to the stars.

I titled my novel Earth Alone, because often we feel alone in the great void. Carl Sagan wrote, "In our obscurity, in all this vastness, there is no hint that help will come from elsewhere . . ." In Earth Alone, we find help and courage within ourselves.

I think your success in indie publishing is intriguing to many writers. If you had to give aspiring indie authors one piece of advice, what would it be?

First of all, I wouldn't rush into publishing. If you're a new writer, take time to improve your craft. Write short stories. Read books about storytelling. Study how characters and plots work. Write novel drafts and toss them out and start again. Workshop your stories. Before you step onto that stage, practice. Get good.

When you're ready, put your marketing hat on. Find what genre and sub-genre your work best fits into. Read popular novels in that genre and understand why readers love them. Write for that audience. Pay somebody to edit your manuscript. Get a cover and blurb that's on par with what's selling. If you can choose a clearly defined genre, get a professional cover, craft a catchy blurb, and write an addicting story, you're already ahead of most writers. You will sell.

Sometimes young writers ask me about writing for a living. My answer is to never count on writing full time. I would guess that 99% of writers don't make enough money to quit their day jobs. So don't sacrifice your education or job just yet. But if you write well, work hard, and know how to market, you stand an excellent chance of sharing your work with many readers. 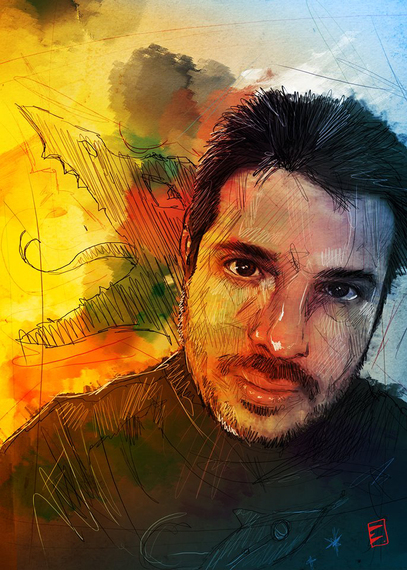 Daniel Arenson is a USA Today bestselling author of fantasy and science fiction. He's written over forty novels, most of them in four series: Earthrise, Requiem, Moth, and Alien Hunters.

Fifteen of Daniel's books have hit Amazon's overall Top 100 bestsellers list; two have hit the Top 20. Over a million copies of his books have been bought, downloaded, or listened to. Raised on Dungeons & Dragons, The Lord of the Rings, and scratchy Star Wars VHS tapes, Daniel still consumes--and tries to contribute to--geek culture.