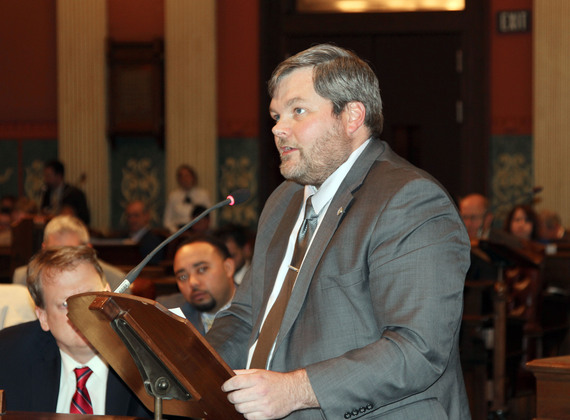 By now, the news of Flint's water crisis has reached every media market in America, but how can real solutions be discussed when our leaders ignore an equally frightening reality that is silently awaiting Flint residents? Michigan's Gov. Rick Snyder has evaded the question every time he is asked, and if he continues to dodge this issue, thousands of families may find themselves homeless in less than 90 days. The question is, should Flint residents have to pay for water that was poisonous? This question is much more relevant than it seems at the surface, so I will attempt to explain why Flint residents need their governor to lead now more than ever.

Over the past year, I have learned more about the details of treating drinking water than I had ever expected. Don't worry though, I'm not writing to lecture about why hydrogen is the loneliest element, or even to explain the grim details of how the poison actually got into the water in the first place. However, I am writing to tell you that many Flint residents stopped paying their water bills in protest to the fact that it was undrinkable, and I will tell you the horrible penalty that they may face from doing so.

There have been several lawsuits filed over the price that Flint has been charging for water over the past few years, and one of these lawsuits was successful last summer. A Genesee County judge ordered Flint to refund a portion of the price paid by its water customers and he issued a moratorium on water shutoffs till the city straightened out its issue of overcharging residents. However, this lawsuit was filed because the city had illegally raised its rate for water to an amount that was greater than what the law allows. In the United States, cities can only charge customers what the actual cost of a service is. In this case, the plaintiff was able to prove that Flint had raised its rate to a price greater than what the cost of the service was. This caused the city to slightly lower the water rates and issue refunds to customers along with not shutting off service to customers who were delinquent. Recently, a different judge ruled that in 90 days the city could reinstate its shutoff policy if bills were not current by then.

The legal case I just mentioned was filed in court before the public was aware of the lead contamination in Flint's water, but the ruling in that case that placed the moratorium on shutoffs was issued around the time that Flint water customers were just beginning to learn how bad the water they were drinking really was. Many residents, with good reason, decided now that a moratorium on shutoffs was in place, that they were simply not going to pay for the poisonous water that the city had been selling them. It has been estimated that more than 80 percent of Flint's water customers stopped paying their bills after the judge issued this ruling.

This next turn in the story may come as a surprise to you, but when a home lacks running water, the government can and regularly does condemn the property or deem it uninhabitable. You may think that this would never happen in America, but many people in the Flint area were forced out of their homes over the last few years for this very same reason. In several instances, it happened at apartment complexes where water bills were included in the monthly rent of each unit. These renters were current in their rent payments, but the property management companies failed to pay the municipality for the water which caused the water for the entire complex to be shut off. These residents did nothing wrong, but in the government's eyes, the law is the law. In these instances, every resident in these apartment complexes was evicted.

Single parents can also lose custody battles over lack of running water. In homes where both parents reside, the state can take away children if they deem the living conditions to be unfit or unsafe, and yes, a home that lacks running water is enough for a home to meet that criteria. Not having something as simple as running water can not only uproot a family, but it can also tear them apart.

Flint water customers are forced to pay one of the highest water rates in the nation. This is adding insult to injury, because more than 40 percent of Flint's residents live below the poverty line. Half of the residents in poverty also live in what's considered to be deep poverty, which equals earning less than half of the income of poverty. These residents do not earn enough money to pay for this very expensive water in the first place, and to add to the dilemma, they have been expected to purchase bottled water for the past several months with not even a penny being credited to their water bills for reimbursement. On Dec. 1, 2015, the city of Flint sent shut off notices to more than 7,000 families, while 60 percent of families have bills that are very overdue, and there are a total of more than 80 percent of families that have missed at least one recent payment. So to sum up the gravity of this situation, in less than 90 days from now, not only could up to 80 percent of Flint's population have their water cut off, but these 80,000 people also face the real possibility of being homeless as well.

This leads us back to the important question that I mentioned earlier: Should Flint residents have to pay for water that is poisonous? You may be able to argue that just because the water had toxic levels of lead in it, doesn't mean that it had no value at all. It is also true that the State Medical Director Dr. Eden Wells has said the water is still safe enough to bathe in. But let's be realistic, would you let your children bathe in water that was so corrosive that General Motors had to stop using it because it was damaging car parts? I hope your answer is no, but if you still think that the water has some value, you find yourself in company with Gov. Snyder. The governor has evaded this question at press conferences lately and maybe for what he deems good reason. Recently, Michigan's Auditor General, along with a bipartisan commission created by the Snyder administration, both placed the blame for Flint's toxic water firmly on his administration. The governor has already apologized for the state's role in poisoning Flint residents, but he has barely begun to pay for a solution for the problem.

The total cost to make things right in Flint is growing every day, and it is still too early to truly understand how this mass lead poisoning will impact the city in the future. What is known is that the estimate of damage done to the city's water infrastructure alone could be more than $1.5 billion. Not to mention the cost that the state will have to pay to deliver water to every home in the city until their water is deemed safe, the cost of potential lawsuits that will arise from this crisis, health care related costs for those who suffer lead poisoning, greatly increased costs to educate youth with lead poisoning related learning disabilities, and the potential economic development losses the city will have because of the horrible image that this issue presents for Flint.

This situation is complicated further due to the fact that both chambers of the Michigan Legislature are controlled by fiscal conservatives that fought for several years over a plan to fix Michigan roads, even though every last member agreed that the roads were in dire need of repair. So you can easily see why the governor is shying away from the question of whether Flint residents should have to pay for poisonous water. If the answer is no they shouldn't, it could easily add millions to the cost of making things right in Flint. I think we can all agree that if Flint's water did have value, that it was pennies on the dollar compared to what the water customers in Flint were being charged. However, no matter what value he assigns to the water it is imperative that the governor act quickly.

That's why I continue to call on the governor daily to go further in his actions of addressing this crisis. While water bottles and filters are a Band-Aid fix, that will do nothing if people lose their homes. Not only would they lose access to any water at all, but they would be forced to survive a harsh winter simply looking for shelter. Gov. Snyder must use his executive powers to forgive the debt owed by those in danger of losing their homes. It is criminal to expect the people of Flint to pay for poisoned water, or face homelessness if they don't comply.

The clock is ticking for families in Flint, and if he lets it expire without a resolution, his legacy will easily be one for the record books.