Someone is trying to murder San Francisco's pets by littering the streets with poisonous meatballs -- and this isn't even the first time.

San Francisco Animal Care And Control is warning residents about recent meatballs discovered around the city that may contain strychnine, the main ingredient found in rat poison.

On Saturday, more than 30 of the meatballs were found, tucked away in bushes and shrubs. 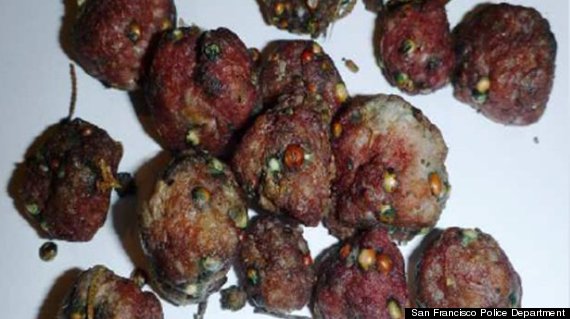 Deb Campbell, a volunteer coordinator for Animal Care And Control, told CBS-SF that the meatballs were most likely placed in spots where dogs defecate and cats roam in an attempt to poison the animals.

The meatballs were turned over to local authorities, who will determine whether the meat is saturated with poison.

In July 2013, hundreds of tainted meatballs were found in the city. Two dogs had to go to the emergency room.

A dachshund named Oskar picked one off the street and exhibited symptoms when his owner, Dorothy Schechter, took him home from his walk.

“The next thing we know, he started to seize and his back went up," Schechter said. "I grabbed him and went to the vet.”

SFPD are continuing to search for suspects. In July, a $5,000 reward was offered for anyone with information leading to arrests.

Anyone with information on the case is asked to call the police department’s anonymous tip line at (415) 575-4444 or text a tip to TIP411 with “SFPD” in the beginning of the message.