The Wartortle made me do it. Shatter my Samsung Galaxy phone screen that is. After traversing the city for two days, visiting PokéStops all over Manhattan, I knew more about the architectural detail in my neighborhood than I'd gleaned in 30+ years of living here. 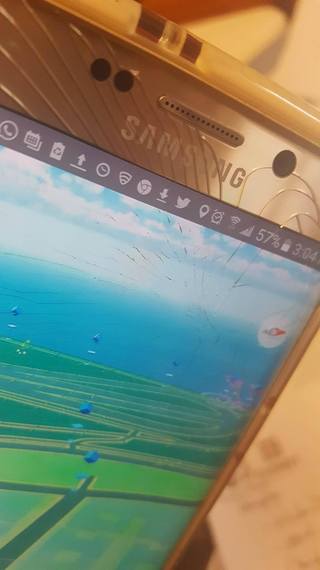 Pokémon GO, as you probably know, is the brainchild of Niantic Labs and Nintendo, currently sending the once anemic Nintendo stock values soaring. The game uses maps and a database of local landmarks and points of interest, requiring gamers to navigate their surroundings, gaining Pokéballs at each stop. Pokéballs are then hurled at Pokémon creatures that show up in a live augmented reality (AR) view of your streets as you play. Once you get through the basic training you enter a convoluted backstory meets battle where your characters, each imbued with a discrete set of powers, battle other Pokémon GO players you meet in the PokéGym. 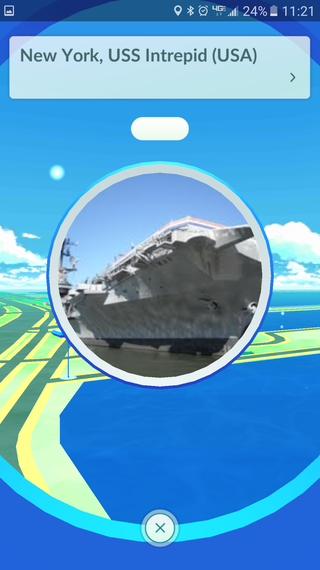 So I had this brainstorm idea to cover more Pokémon GO turf and faster by riding a bike. My Poké-Ramble down the West Side Highway was epic. There was the Intrepid Sea, Air and Space Museum, The red clay tennis courts, The Esplanade, The Fireman's Memorial, endless statues and piers. I stopped my bike every ten blocks or so to check out the local PokéStops, hatch eggs, and finally get enough points to compete in the PokéGym against other players. At the corner of Liberty Street and the West Side Highway, with weather in the 90s and bike sweat working against me, I fumbled. The phone fell to the ground. My screen display luckily is a fairly inane injury. It could have been me.

I am not a youngster, and my three grown kids were too old to be part of the original Pokémon maelstrom. I may be clueless about a Zubat and a Squirtle. I also haven't really mastered the way how a Nidoran moves differently from a Sandshrew, and honestly, I couldn't care less. The battles don't hold my attention and I'm definitely a loser.

But here's what's happening in neighborhoods near you and me. People are playing together in groups, with their families, in the park and more, all over the world. They are playing in rural, urban and even underwater locations. People are seeing their neighborhoods in new augmented detail (many of the stops have a narrative explaining a bit about the history of what you're looking at) through the eyes of their mobile device. I can spot out Pokémon players easily--crowding around shared screens, huddled in the shade trying to see their screens, holding their phones in the air like an artist trying to capture a moment. Some are determined. Some are giggling. Some are grimacing or perplexed, but they're all engaged. At its best, the game represents an opportunity to visit and explore. For me, it's like having a virtual tour guide with the gaming elements tossed in for extra gratification. For me, the augmented reality is in the information provided about my real environment. The little pop-up AR Pokémon are just the icing.

It's just the beginning of these types of communities and experiences that augmented reality - adding new information to existing reality - will bring. Yeah, I know Pokémon GO players can be less aware of their surroundings than they ought to be. And there have been some Poké-flare-ups, like the guy I saw on 72nd Street who nearly attacked a player because he thought the player was taking his photo (also the kids who got mistook for trespassers, the guy who stepped off a ledge, and others). I hope they are the anomalies.

The AR universe is waiting to see what will happen as monetization of the game rears its head. There will be blunders and crude attempts to monetize the pure fun of Pokémon GO. For a brief period, Niantic opened up the underlying database so that anyone could add a Pokéstop to the database, but that initiative was quickly quashed due to overwhelming response. More likely, hotels, retail stores, and real estate agents to name a few, will pay to join the Pokémon landscape. They'll be selling lattes, co-ops and spa treatments. If not vetted by the game's developers, there will be some serious Poké-Pollution. Whether or not the game endures will involve managing the commercial onslaught (for those of you who remember SecondLife, which is still around but fell from grace for being too commercialized) take warning.

This is just the beginning of a whole new world of online/offline play. Pokémon GO will need to choose how to utilize its obsession-status. Right now, the game is a pure haven of fun - a nostalgic blast from the past meets an opportunity to connect with your neighbors, a tool for local discovery - but you can also already look into the not-so-distant future to see it littered with sponsored gyms and branded content. So get out there and enjoy it while it lasts. The combination of outdoor activity and AR is the perfect storm. For some it's a mobile version of Pokémon and for me it's the journey, not the Squirtles that count.