It's hunting season for mythological creatures, from New Jersey Muslims celebrating the World Trade Center attack to transgender bathroom predators, not to mention Jeb Bush supporters, we are getting used to seeing things that aren't there. So it should be no surprise that the most popular gaming app is dedicated to finding imaginary monsters: Pokémon Go. 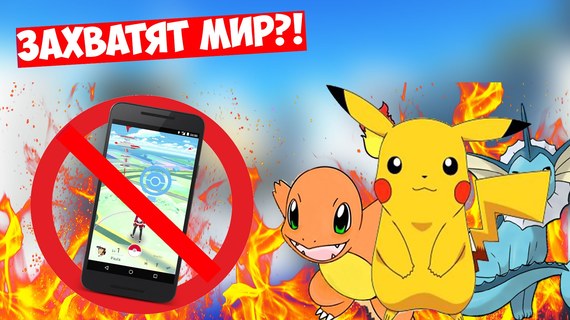 For those of you who have been living under a rock, or, God forbid, paying attention to real news, Pokémon Go is a smartphone-based scavenger hunt using augmented reality; players look through their phone's camera lens to see Pokémon characters living among us. Like any craze, it's annoying to the uninitiated, but the media coverage in the US has overall been positive, especially since the game actually forces people to walk around in the open air.

In the Russian Federation, the game has proven extremely popular, even before its official Russian rollout. Cue the conservative politicians and Russian Orthodox talking heads, who seem determined to turn every fun innovation into a chance to remake Footloose.

Meduza's English language service has helpfully provided a few of the greatest hits of Poképaranoia: Communications and Mass Media Minister Nikolai Nikiforov expressed the "suspicion that this app was created with the help of certain intelligence agencies, who are collecting video information from around the world." The First Deputy Chairman of the Federal Council's Committee on Defense feels that "the Devil has arrived through this mechanism, and he's simply trying to ruin us spiritually."

The Moscow Times reports that patriotic organizations are calling for a ban on the app, while a Moscow Parent Advisory Board is organizing "anti-Pokémon Go classes" for parents. A Russian Orthodox priest sees the emphasis on "monsters" as "Satanic." And, not to be outdone, self-proclaimed Cossacks have announced that "this Pokémon stuff is alien to us" (The Russian Reader points out that, in this day and age, "Cossacks" are just as imaginary as Pokémon.)

Igor' Boev, director of a Stavropool mental health clinic, calls it part of the Western information war, directed against our children and the country's future. "There will be no businessmen or workers, or political figures," he ominously warns his viewers; "instead of them there'll just be social Pokémons."

Fascistic Beasts and Where to Find Them

On the surface, this looks like just an ordinary moral panic, the kind that strikes America roughly once per decade: comic books, explicit rock lyrics, violent video games, and rap lyrics have all taken their turns as the object of demonization by "concerned parents," "experts", and the media. But the geopolitical angle here is more reminiscent of the Red Scare, or of Soviet-era campaigns against American popular culture: "First you listen to Jazz, then you sell out the Motherland" (trust me, it sounds better in Russian, though not much).

As with all moral panics, we should be careful not to assume that the media's framework is in any way representative of ordinary people's experience. Presumably, even supporters of the ruling United Russia party aren't particularly worried that their Pokémon-obsessed offspring are sharing state secrets with Yankee spies.

The concerns about "morality" are unsurprising, as is the charge that there is something "unRussian" about Pokémon Go. Of course Pokémon Go isn't Russian (it's not American either, though that gets lost in the shuffle), but one could make a strong case for its consistency with Russian traditions. What is Pokémon Go, after all, if not the collecting and monetizing of Gogolian Dead Souls? Russian folklore and lower mythology is filled with supernatural creatures inhabiting every nook and cranny of the Russian world (house spirits, bath spirits, forest spirits).

But the coverage is both disturbing and revealing, displaying an almost Pavlovian reflex: everything is part of the American "information war." Yet this paranoid reaction, based on fears of spying and brainwashing, is about more than just the revived Cold War.

Instead, I would argue that Pokémon Go troubles the Russian media imagination because it represents the return of the repressed.

First, we have the Russian elite's fear of its own population, especially of a population that moves and mobilizes spontaneously. State Duma Deputy Yevgeny Fyodorov expressed particular concern about Americans getting Russians to "go out in the street." This very spontaneity has to be cast as the work of evil puppet-masters; just as the street protests of 2014 and the Maidan uprising in Kiev were said to be the work of the State Department, so too must Pokémon Go be part of a sinister master plan.

More important is the resemblance between the augmented reality of Pokémon Go and the creation of phantom villains in the Russian media. If anything, Pokémon Go is a parody of the current Russian political scene: Russians should be on the lookout for "fifth columnists," American-financed fake human rights crusaders, gay and lesbian sexual predators, and anyone who dares to question the legality of the Crimean annexation. This, too, is augmented reality: asking Russians to look through a particular lens in order to see what isn't there.

Finally, we must never forget the famous Pokémon slogan: "Gotta catch 'em all." Let us hope that this doesn't become a motto for Russian politics.