The governments can't get along. In Poland, with the election of a more conservative president and parliament, the tense relations with Russia grow. And these were never easy in our history. For people of my generation, living in Communist Poland, learning Russian language in school was mandatory. And as such, it wasn't much liked.

Meanwhile, far from the madding crowdpolitics, theatres from Gdansk, Poland, and St. Petersburg, Russia engage in a cultural exchange, which brings their artists and citizens together. Very much in line with the global trend of cities being the creators of international policy, Gdańsk Gdansk and St. Petersburg exchange theatrical performances.

"Baltic. A dog on an ice floe" goes to Saint Petersburg 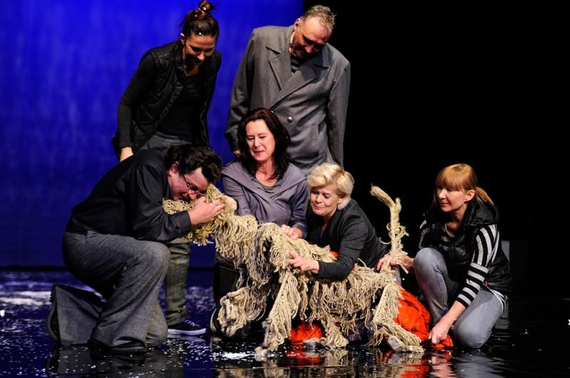 On December 15, 2015 at 12:00 and 3:00 p.m. the Gdansk Municipal Theatre will showcase its play "Baltic. A dog on an ice floe ", directed by Romuald Wicza-Pokojski of the Interior Theater, Nevsky Prospekt, 104 in St. Petersburg (Russia). The Interior Theatre in St. Petersburg was officially founded in 1988, but its history dates back to the 1970s with the first performances by its later director, Nikolai Bieliaka. The theatre produces plays mainly for adult viewers, based on international and Russian classics (Shakespeare, Chekhov, Pushkin among others), but its repertoire also includes plays for younger viewers. "Baltic. Dog on an ice floe" is a documentary play for children inspired by the story of a dog rescued in January 2010, as he drifted on the Vistula river in Poland on a piece of ice floe. Freezing and scared he was saved by the crew of fishermen. His story made international news. The dog named Baltic is currently a member of the crew and an honorary citizen of the Polish city of Gdynia.

There is less than 100 miles from Gdansk to the bordering region of Russian Kaliningrad. For many of our Russian neighbors, my city is an important commercial and tourist destination. They do shopping and sightseeing, take part in cultural performances, fly from our airport to other countries. One can even consider Gdansk as a "window to the world" for this Russian exclave. These time our people are going to Russia to perform a play "made in Gdansk". I am very glad that Gdansk can contribute to breaking the ice with culture between our countries. And the play with an ice floe in its title could be a first step in this tough task.