Cannibalism is not a part of polar bears' M.O. The animals normally refrain from feasting on their own kind.

In July 2010, BBC News reports that Ross witnessed a polar bear killing and eating a cub in the Svalbard archipelago of the Arctic. She recently presented her photos and story at the 2011 American Geophysical Union (AGU) Fall Meeting, and her paper covering the event has been published in the journal Arctic, co-authored by polar bear specialist Dr. Ian Stirling.

SCROLL DOWN FOR GRUESOME PHOTOS OF THE POLAR BEAR EATING A CUB.

Ross told BBC News that the polar bear killed the cub with sharp bites to the head, and once the bear spotted a boat, he became protective over his meal.

While this isn't the first time that a polar bear has been seen eating a fellow bear, there has been a noticeable increase in occurrences, "particularly on land where polar bears are trapped ashore, completely food-deprived for extended periods of time due to the loss of sea ice as a result of climate change," Ross told BBC News.

In 2009, The Canadian Press reported that witnesses saw up to eight males eating cubs around Churchill, Manitoba, in one season. In the past, the bears were able to travel the iced-over Hudson Bay for food, but in recent years it was taking more time to freeze over. While tourism was considered a possible explanation, experts also considered that there may be a link to climate change.

Center for Biological Diversity's Kassie Siegal blogged on HuffPost about the warmer, increasingly ice-free season in western Hudson Bay, where "the bears now have to contend with ever-increasing periods of fasting on land and shorter periods out on the ice to catch the seals they need to survive. The bears here are smaller and lighter than they used to be, fewer cubs survive, and the population is declining in numbers."

Also in 2009, a video on MSNBC reported that tourists witnessed an adult male polar bear eating a cub. Stirling said in the news report that while polar bear cannibalism always occurred, he was seeing it taking place more often. Recording the rising instances of cannibalism in the Beaufort Sea, he said, "These are things that I had never seen before in the 30 years that I'd worked in that part of the world."

There are certain circumstances under which polar bears do feed on other bears. For example, TIME explains that a polar bear may eat its cubs if they are believed to be sick.

Extenuating cases aside, polar bears usually feed on seals. Ross wrote in Arctic that due to melting sea ice, there are fewer seals for the polar bears to feed on. "As the climate continues to warm in the Arctic and the sea ice melts earlier in the summer, the frequency of such intraspecific predation may increase."

Polar Bear Eats Cub: Cannibalism May Be On The Rise (GRAPHIC PHOTOS) 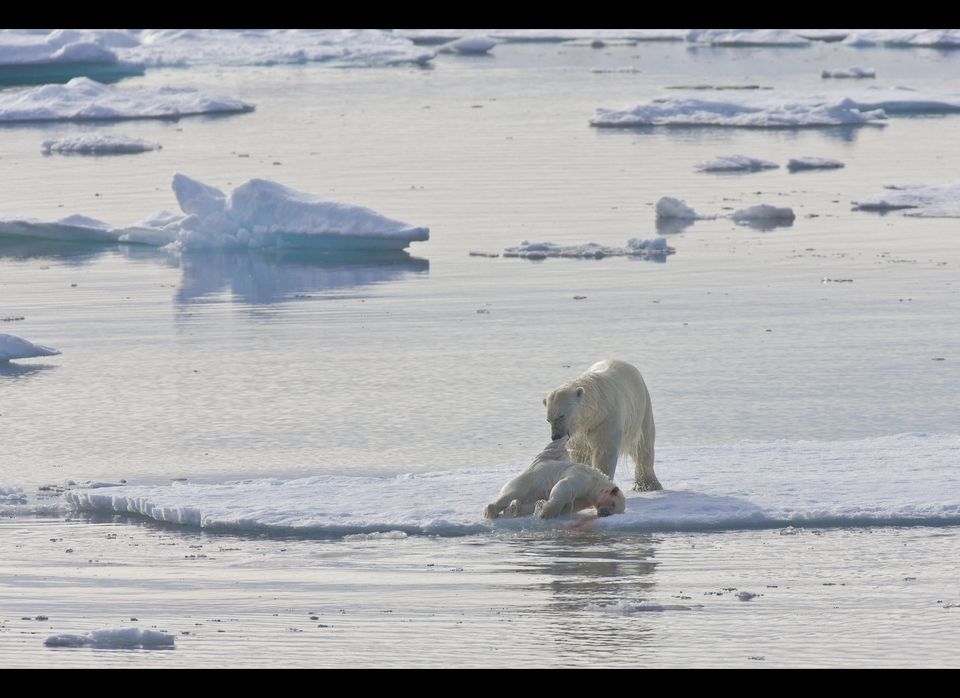