For the first time ever, researchers have documented polar bears preying on and eating dolphins.

Scientists in the Norwegian High Arctic witnessed an adult male polar bear prey on two white-beaked dolphins in mid-April of 2014, eating one of the animals, then covering the other dolphin with snow, likely saving it for later. Some of the graphic photos taken by the researchers can be seen below.

The researchers documented their findings in the June 1 issue of Polar Research, remarking that, in the following ice-free summer and fall, they discovered at least seven other dolphin carcasses believed to have been scavenged on by six different polar bears. 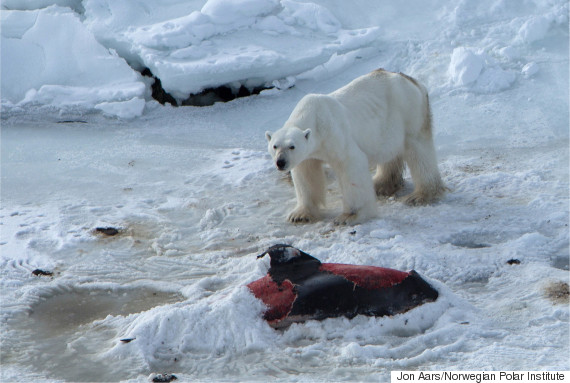 "It is likely that new species are appearing in the diet of polar bears due to climate change because new species are finding their way north," Jon Aars, one of the researchers at the Norwegian Polar Institute, told AFP.

Aars speculated a pod of dolphins ventured into the Arctic, lured by warm water and retreating ice, then got stuck when strong winds blew ice on top of them. The first polar bear likely caught the two dolphins when they surfaced to breathe through a small hole in the ice. 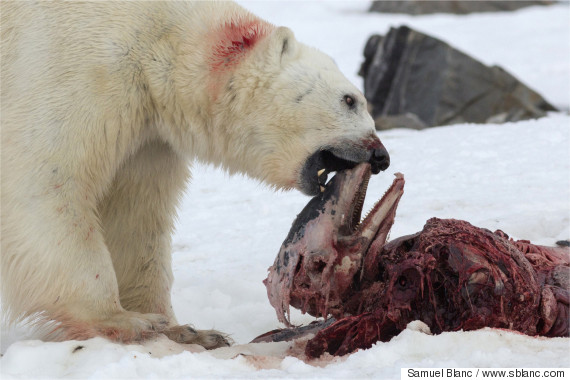 As the ice retreats, so has the availability of seals, which constitute much of a polar bears' standard diet. In the absence of seals, they'll eat anything they can get their paws on, says Ian Stirling of the University of Alberta in Canada.

"They will eat any marine mammal given a chance," Stirling told New Scientist. "The bigger surprise was that the dolphins were entrapped before they could migrate south for the winter."