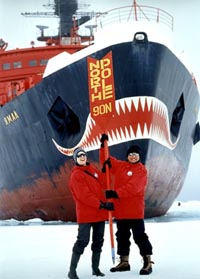 With December's chill comes memories of even colder climes, at the geographic North Pole. A while back, not only did I visit the mysterious place but, sans wetsuit, dove head-first into the frigid water there to join the ultimate polar bear club.

Truth be told, a trip to the Pole can be quite cushy. If you travel via retrofitted icebreaker, as I did, your heated cabins are equipped with showers. The ship has a bar and gourmet meals. It's a far cry from what explorers Robert Peary and Frederick Cook endured in the early 1900s in their efforts to claim 90 degrees north.

In August, 100 adventure tourists and I boarded a Quark Expeditions icebreaker for the two-week cruise. At 81 degrees north, still 550 miles from the Pole, we began to encounter ice. At first, there were just sightings of lone bergs. Soon enough, though, we hit the heavy pack ice surrounding the Pole -- thinner than in winter, but formidable nonetheless.

There was a constant up-and-down movement as the ship's bow rode up on the ice, fell as the ice caved in, rode up onto it again, fell and so on. The hypnotic motion served to induce sleep rather than deter it. The real hindrance to shut-eye was constant daylight. In summer near the top of the world, the sun never sets, just circles the sky monotonously at a low angle.

When we neared land, helicopter excursions were arranged. One was to Novaya Zemlya, a large, crescent-shaped island where Russia had done much of its nuclear testing. Another was to Franz Josef Land, a group of high-arctic islands from which early explorers embarked on attempts at the Pole. Both outposts, bleak and on the fringes of civilization, were manned by Russian scientists and military personnel during the Cold War. Today they are uninhabited.

As we approached the actual Pole, an excited crowd gathered on the bridge to watch the ship's global positioning system (GPS). When it read 90 degrees north, a loud cheer bubbled up, expensive champagne was uncorked, and fireworks exploded.

No sign of Santa but, surprisingly, there was a mix of ice and open ocean surrounding the ship. The weather, downright balmy, seemed to surprise some passengers. The truth is, there's usually open water there in summer. The Pole is nothing but a geographic point on the globe -- 90 degrees north -- with pack ice floating above it. In summer, when the pack is thin and scattered, its movement occasionally leaves that point uncovered.

After finding solid ice in which to anchor the ship, we disembarked and spent a few hours wandering around. For me, of course, the big moment was the polar plunge. Why? I felt a twinge of guilt cruising up here in such comfort. Darn it, some harshness must be endured!

A makeshift ladder was fastened to the pack ice, and a call went out for those who wanted to swim. During the cruise, there had been lots of big talkers, but when we got down to it, only a few were takers. No wonder: The water is over 12,000 feet deep, and its temperature a bone-chilling 28 F.

I took clothes off to reveal a fiery red bathing suit underneath, and wrapped a tether safety line around my waist. A doctor was nearby, with charged paddles, in case my heart stopped from the sudden shock of the cold. For a moment I thought about sampling the water with my toe, but quickly discarded the idea, figuring if I did, I would never go in. 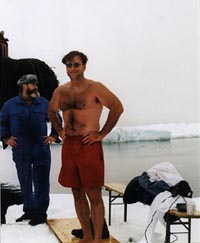 Then I dove into the black water. The first few seconds I felt nothing -- it's such a jolt that you're essentially numb. After a few strokes, though, you realize something is hugely amiss. First, it feels like a thousand needles are pricking you all over, then your brain starts to go fuzzy. You sense that if you don't turn around immediately and get back to "shore," you'll pass out. It seemed like an eternity, but I was in the water for all of 30 seconds.

Safely back on the ice, a shot of vodka and a chocolate were thrust into my hand, and a dry towel was wrapped around me. The air, just 17 F, felt warm, like a summer's day. I stood on the ice for a good 10 minutes talking before being warned that hypothermia could strike. It may feel warm to me (and it was, relatively speaking) but that was only an illusion.

Later, I was presented with a certificate saying, "Did brave the raw arctic elements by stripping off multiple layers of warm, protective clothing and, in seminakedness before a cheering crowd of less hearty souls..." Heh heh, as if we didn't already know we were crazy.