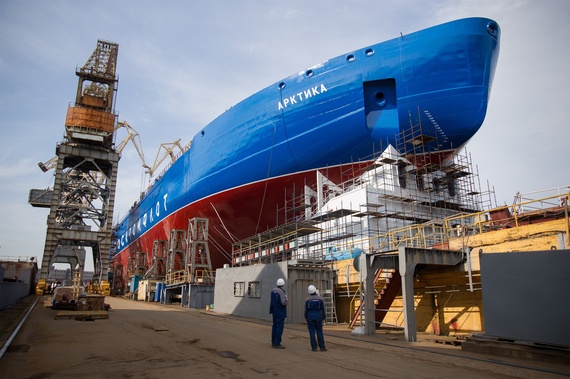 At the height of the cold war, the polar region was one of the centers of the superpower's shadow war. Ballistic missile carrying submarines were virtually undetectable in the cold waters below the Arctic icecap, while the air above represented the shortest routes for intercontinental bombers. Today, a rapidly melting polar ice cap is once again making the Arctic the nexus of a modern great power rivalry.

To date three countries, Russia, Canada and Denmark, have extended claims to the arctic seabed that encompasses large portions of the Arctic, including the geographic North Pole. China too, although not an arctic nation, has set its sights on a broader role in Arctic affairs. While the U.S. has not yet extended any broad territorial claims to the arctic seabed, the U.S. Navy is gearing up to deal with the challenge of naval surface warfare in an ice-free Arctic.

On June 16, 2016, Russia unveiled the lead ship in the LC-60YA class of nuclear powered icebreakers. Aptly named Arktika, the new behemoth measures 569 feet long and 112 feet wide at the beam, and it cost approximately $1.9 billion to construct.

The ship displaces 33,540 metric tons, about three-quarters of a World War II era Iowa class battleship. Powered by two nuclear reactors, it can cut through ice ten feet thick and has a top speed of 22 knots. It is described by Russian officials as "the largest and most powerful" icebreaker in the world.

On average, Arctic sea ice is between six and ten feet thick, which means the Arktika can travel almost anywhere in the polar region on a year around basis. There are a few regions where sea ice can measure up to fifteen thick, but these are increasingly rare.

The name harkens back to the original class of Soviet built nuclear powered icebreakers, which began in 1971. The original Arktika was the first surface ship to reach the North Pole on August 17, 1977. It was decommissioned in 2008. A total of five additional icebreakers were built between 1977 and 2007. The new Arktika is about 30 percent bigger than its original namesake.

The ship is scheduled to begin service in 2018, when it will begin to escort oil tankers and LNG carriers from northern Russia to ports in the Asia-Pacific region.

Russia has more icebreakers than any other country in the world. In fact, it has more icebreakers than all of the other countries of the world combined. While Russia's long Arctic coastline is clearly a factor in Russia's nuclear icebreaker program, the Kremlin has made no secret that it has broader ambitions in the Arctic. Russia resumed intercontinental bomber flights over the Arctic in 2007. That same year, it also planted a Russian flag, constructed from virtually indestructible titanium, on the sea floor directly over the geographic North Pole. 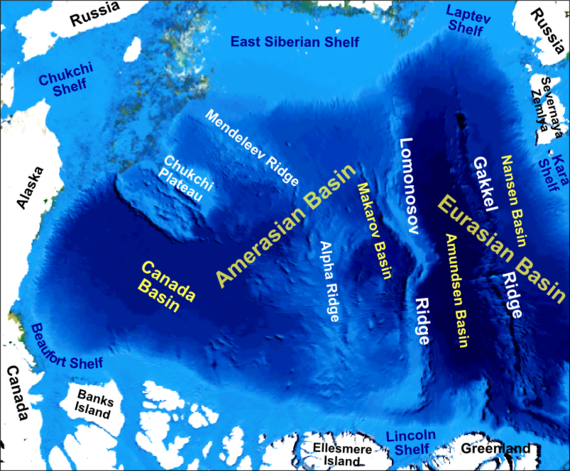 Lomonsov and Mendeleev Ridges on the Arctic sea floor

Moreover, of the four million people that inhabit the region surrounding the Arctic Ocean, between the North Pole and the Arctic Circle, roughly two million are Russian. The other two million are divided between the United States, Canada, Greenland (an autonomous Danish territory) and Norway. Iceland, though technically an Arctic nation, does not actually border the Arctic Ocean. The Arctic seabed is believed to hold some 15 percent of the world's petroleum reserves and 30 percent of its natural gas reserves.

Conflicting claims to the high arctic date back to at least 1925, when Canada extended its maritime boundary from 60 degrees west to 141 degrees west northward, all the way to the North Pole. The distance between Canada's northernmost point of land and the geographic North Pole is 415 nautical miles (478 statutory miles). The next year the Soviet Union followed suit claiming a vast area from 32 degrees east (west of Murmansk) to 168 degrees west (eastern Chukchi Sea) to the North Pole.

In 2001, Russia asserted that the Lomonosov and Mendeleev Ridges, which extend along the Arctic seabed, are an extension of the Eurasian continent and the territory surrounding them should therefore be included as part of the Russian continental shelf. The Lomonosov Ridge runs some 1,100 miles, and spans the Arctic Ocean almost all the way to Canada's Ellesmere Island. The Mendeleev Ridge is shorter, but covers the central area of the Arctic Ocean, including the geographic North Pole. In total the Russian claim covers 460,000 square miles.

The United Nations (UN) Commission on the Limits of the Continental Shelf has declined to rule on Russia's claim for an extended Russian continental shelf and has asked for additional documentation and research. Should the UN uphold Russian claims, both the geographic North Pole and a large portion of the Arctic Ocean would come under Russian control.

Danish scientists, in the meantime, have contended that the Lomonosov Ridge is actually an extension of the Greenland continental shelf. In 2014, Denmark filed a claim, under the provisions of the UN Conference on the Law of the Sea (UNCLOS), covering an area of 346,000 square miles (sqm) around the Lomonosov ridge, extending from Greenland all the way to the Russian continental shelf and including the North Pole. By comparison, Greenland's total surface area is about 836,000 sqm.

Norway also filed a claim with the UN Commission on the Limits of the Continental Shelf as set out in the UNCLOS treaty. Oslo claimed three areas of the Arctic and northeastern Atlantic based on an extension of the Norwegian continental shelf.

While the other polar countries have recognized Canadian sovereignty over its northern territories and islands, Ottawa's claims that the various channels and straits that comprise the Northwest Passage are also part of Canada's internal waters are not universally accepted.

Both the United States and various European countries have argued that the Northwest Passage is an international waterway allowing free and unencumbered passage. The Arctic offers a sea route from East Asia to Europe that is some 4,000 miles shorter than current routes. Despite announcing ambitious plans to enforce its arctic claims, Canada has done little beyond organizing a royal tour of the Canadian Arctic by Queen Elizabeth and Prince Phillip I in 1970.

In 2009, the Canadian Parliament officially renamed the northwest passage the Canadian Northwest Passage. Beyond that, successive Canadian governments, both Liberal and Conservative have failed to follow through on their announced plans.

Russia too has an arctic passage, dubbed the Northern Sea Route or Northeast Passage, it runs along the Russian northern coast from the Kara Sea to the Bearing strait. The entire route is within Russia's exclusive economic zone. This route has already been used to ship Russian fertilizer between Murmansk and Churchill Manitoba. Currently, this route is only ice free for about two to four months of the year. The arctic pack ice is thinner here, however, as a result of the warming effects of the Gulf Stream. In short, the first transarctic shipping route between Asia and Europe will likely be the Russian route.

All of the claims filed to date have been under the provisions of the UNCLOS treaty. The United States has signed but not yet ratified the UNCLOS treaty. According to the treaty, a country has 10 years from the ratification of the agreement in which to file a claim for an extended continental shelf. To date the U.S. has not made any formal claims to the arctic seabed. The continental shelf of Alaska has been extensively, but not completely mapped by the United States. 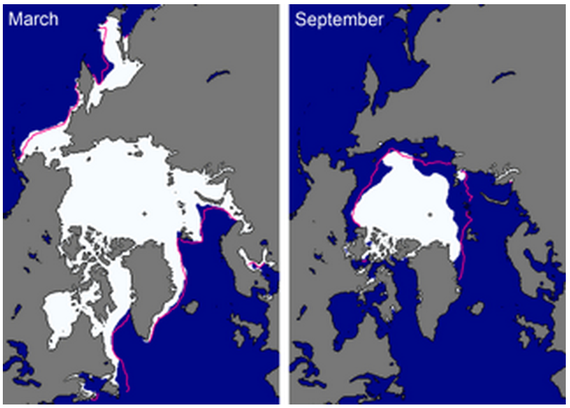 China is not an Arctic nation, but that has not stopped it from seeking a larger role in the Arctic's geopolitics. China has held observer status on the Arctic Council since May 2013. The Arctic Council in an intergovernmental forum made up of representatives of the United States, Canada, Denmark, Finland, Iceland, Norway, Russia and Sweden. The Council addresses issues that pertain to the indigenous peoples of the Arctic and to Arctic nations.

China established an arctic research station, the Arctic Yellow River Station, on Svalbard in 2003, and despite not being an Arctic nation spends more money on Arctic research than the U.S. In August 2012, the Chinese ice breaker, Xue Long, operated by the Polar Research Institute of China, successfully traversed the Northwest Passage.

China's most ambitious Arctic venture, however, has been China's rapidly growing investment interest in Greenland. In 2013, a consortium of Chinese steelmakers proposed a $2.35 billion iron ore-mining project. The mine would ship about 15 million tons of iron ore annually to China. The revenues it would generate would exceed Greenland's current GDP. It would also see the arrival of up to 5,000 Chinese workers, boosting Greenland's population by about eight percent. The mining venture has not yet been approved. 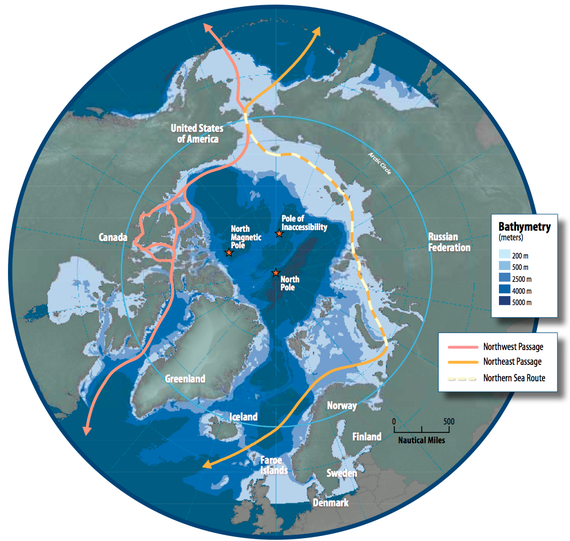 The Northeast and Northwest Passages across the Arctic.

Greenland is also believed to be rich in rare earths. These strategic metals are indispensable in a broad range of modern electronic devices, from cell phones to MRIs. Currently, China controls the mining of over 90 percent of the world's rare earths. Should Greenland become fully autonomous from Denmark, Chinese investment and influence there could give Beijing a far more influential role in Arctic matters.

A rapidly melting ice pack, the prospect of substantial energy and mineral wealth, both offshore and onshore, faster shipping routes, as well as increases in commercial fishing and eventually tourism, all promise to make the Arctic a hotly contested region. Polar politics are becoming the next arena for big power rivalry in the 21st century.