So, if you're a big fan of Gary V or Grant Cardone you know that they're always talking about the hustle. That you should work your butt of 24/7 nonstop every single day.
Here's the problem with that...many people hustle but they hustle on the wrong things. An example of that is when someone is trying to lose weight. They can hustle and go to the gym regularly but if they eat wrong - it doesn't work out too well.

Now let's be completely real here. I'm not saying don't hustle. I'm saying don't hustle for the sake of hustling because you think that's how you're going to make it. That is the old way of thinking. Here's why, I recently found an entrepreneur named Christopher Duncan. He's a multiple 7 figure business owner, best-selling author with 8 companies, over 40 staff members, and a huge podcast. The man is amazing. But what intrigued me more is what he lives by. He lives by the slogan "Total Freedom".

He has a business that works for him even when he doesn't. There will be times when he wakes up and goes to the beach because he feels like it. He can come home, crush a webinar and be good in his business. He's able to live which is what everyone should be doing.

I interviewed him recently to figure out why there's this notion that entrepreneurs need to hustle to make it. The very first thing I learned with Chris is that he makes it specifically clear that life is more important than hustle. As an entrepreneur, I agree 100% because even though I love working - the moments that really stick with me are the moments that I have with my parents, friends and going on adventures.

When you're lost in the hustle you forget what life is all about. I'm going to teach you something he taught me during the conversation.

The first question I want you to ask yourself is this: would you do the work for free? Most likely the answer you chose is no. You're either doing the work you're doing because you need money or it pays you well. If you're doing it for money than you are essentially trading your life for money. If you're ok with that, let me put it into more perspective.

Imagine the person you care about the most in this world. Would you sell their life for money? If you're answer is no. Then why are you doing it for yours?

That's the entire point. Your time is your life. You're trading your life for money. You're missing out on having a relationship with your parents, children, friends. Potentially missing out on birthdays, experiencing new adventures and experiencing this miracle we call life.

Hustle is the old way of thinking. It's a job mindset and sales mindset. In the new era of technology, you no longer need to work your butt off to make it. You can work smarter. The hustle mentality also sets you up for living later...but later never comes. You're hustling now so you can live your life later but what if you die tomorrow? You've got to learn how to live life in the moment and still work towards the future.

You see, if you just knew the needle movers in your business - the small things that make all the difference. You can just do that. This is where the 80/20 rule comes in. People are hustling and they're doing the 80% of the things that don't even matter as much. If you were focused on the 20%, there wouldn't need to be a lot of hustle. There could be more delegation.

So now the question becomes what is the 20%. The truth is that it's different for everyone because it depends where they want to go. But generally, Chris says it's cashflow. Making sure the money coming in is more than the money going out. Making sales and increasing cashflow. The next thing would be to delegate the tasks in your business so that you can focus on what makes you happy.

Here's a prime example of what I'm talking about. I screenshotted a status that I saw on Facebook the other day it represents the 80/20 rule perfectly while shining light on the 80% that doesn't even matter. 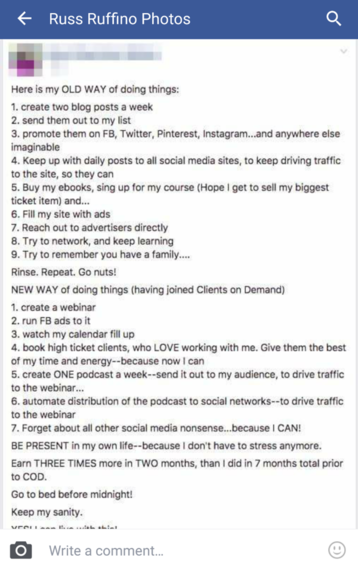 Notice the difference? He was hustling a lot before but getting little to no results. Now he gets to live life while making more money.

Society has conditioned us to think we should work for 8 hours in a job. But what if the job gets done in 2 hours?

The hustle is based on a non-outcome driven society. Where people think, they need to constantly hustle which is why one of the reasons entrepreneurs always say "we don't have time". But when you become productive instead of busy you can't give yourself that excuse.