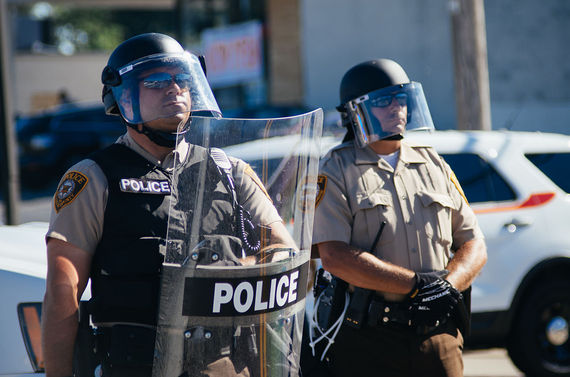 The juxtaposition of views on the police is wide. On one side, the police are depicted almost universally as militarized bigots who use excessive force at the drop of a hat, without regard to the well-being of those they are taking into custody. On the other side, the police are lauded as almost universally good and heroic men and women who for too little pay and facing enormous risk, put their lives on the line day in and day out for the good of their communities. These depictions of police are for the most part caricatures. Allow me to suggest another depiction, one in which both of the aforementioned views are each valid and at the ends of a continuum; the vast majority of police officers fall somewhere in the middle of the mix, neither villains nor heroes, but hard-working, dedicated people doing a tough job - sometimes doing that job well and sometimes making poor choices.

If we can get away from demonizing or mythologizing law enforcement, we might be better able to assist officers in making fewer poor choices that harm officers, individuals being arrested, and our communities. What is it that causes a police officer to act out? Even if we assume some are bigots, bullies, and bad apples, we still cannot account for all the poor choices police officers make. This may be because we do not want to acknowledge that a large percentage of our law enforcement officers suffer from post-traumatic stress disorder (PTSD), and the vast majority of those officers receive little or no treatment.

PTSD is a response to extreme or ongoing stress. The National Institute of Mental Health describes PTSD as follows:

When in danger, it's natural to feel afraid. This fear triggers many split-second changes in the body to prepare to defend against the danger or to avoid it. This "fight-or-flight" response is a healthy reaction meant to protect a person from harm. But in post-traumatic stress disorder (PTSD), this reaction is changed or damaged. People who have PTSD may feel stressed or frightened even when they're no longer in danger.

PTSD can be triggered in two ways. The first is through a single traumatic event, such as being a first responder on 9/11 or part of an officer involved shooting. The second way PTSD develops is through ongoing stress and being witness to difficult situations that one is powerless to change. Imagine responding day after day to cases of domestic violence, child abuse, desperate people stealing to put food on the table, or to help individuals who are suicidal or so high they are a threat to themselves or others. The unrelenting stress not only can cause individuals to become jaded, it can leave them traumatized.

There is little difference between the experiences of veterans and police officers who develop PTSD. Further, both groups have a culture of denying the psychological wounds their jobs can create and are sometimes inhibited by that culture and personal beliefs when it comes to seeking treatment. Failure to treat PTSD, which is estimated to affect nearly one in three officers at some point in their careers, can lead to the break-up of families, substance abuse, and suicide. Untreated officers are also more likely than their counterparts without PTSD to overreact and make poor decisions in difficult situations. Given these realities, helping police officers with PTSD receive appropriate, confidential treatment should be our first effort in reversing the breakdown of trust between law enforcement officers and many of our communities.

As an expert in PTSD and substance abuse treatment who works regularly with veterans with PTSD and co-occurring disorders, and as a person who has overcome PTSD myself, I know that there are great therapies that completely change lives. Let's start the conversation about PTSD among police officers, corrections officers, and border patrol agents like we have with veterans. Mandatory PTSD symptom identification training for supervisors and quality, mandatory mental health care for our officers will radically change the landscape of our communities and our interactions with the police.