Last month Bill Bratton, champion of Broken Windows, godfather of Stop and Frisk and once-again commissioner of the NYPD, demanded a retraction from the Guardian for quoting him -- out of context, he argued. A Guardian story, quoting from a separate May 20th piece, ruffled feathers. Bratton, whose contributions to mass criminalization are well documented, quipped about race and policing in New York:

We have a significant population gap among African American males because so many of them have spent time in jail and, as such, we can't hire them.

The usually blunt, slightly racist stuff that comes out of Bratton's mouth drew a backlash in this instance as local papers ran front page stories the following day. Even local politicians, normally bobble-heading to whatever Bratton says, were taken aback.

Beginning with a flattering portrayal of Eric Adams, a former NYPD captain turned Brooklyn borough president, the Guardian story focused on diversity within police departments. The NYPD, which has had an almost 20 percent drop in overall applicants, had a lower black recruit percentage rate in 2015 than it did in 1970 (6.86 percent vs 7.3 percent).

Some of these diversity concerns came up last year when then NYPD Chief Philip Banks, the highest ranking black cop at the time, abruptly resigned from the department, raising concerns about race at the highest levels of leadership in the department. Rafael Pineiro, the NYPD's highest ranking Latino cop, had just been pushed out by Bratton earlier in the year. Banks was replaced by Ben Tucker, a gentlemanly black ex-cop affiliated with the Department of Justice.

All three are white. If you include the old white cronies Bratton has instructed the NYPD's private fundraising arm (aka the Police Foundation) to steer NYPD consulting money towards, yes, the NYPD's decision-making apparatus looks pretty pale. But is that where a (to say nothing of the) problem lies? Could there be a solution by diversifying not only the rank and file, but also top brass? 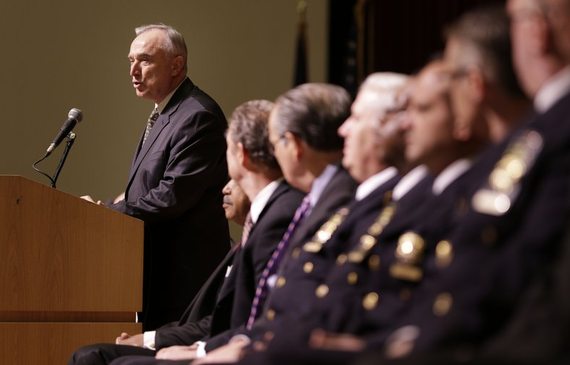 Bratton and most NYPD top brass are old white men, but will black faces change anything?

Some, like Brooklyn College's Alex Vitale, have convincingly argued diversity won't change the practices of aggressive police departments. Recently fired (ex) Baltimore police commissioner Anthony Batts, a Bratton protegé, was a black police leader in charge of a department whose abuse inspired an urban revolt this year. In Ferguson, highway patrol captain Ron Johnson was brought into quell protests there last year largely because Johnson, who's black, might have calmed down protesters. That didn't work out for very long as protesters turned on Johnson when they found he was, still, just like any other cop. In New York, look no further than black ex-cop Adams, now an ambitious politician who wholeheartedly embraces the controversial Broken Windows policing theory (the hyper-policing of low-level offenses) for exhibit A as to why many here roll their eyes at any diversity-as-reform talk.

But while more diversity within the ranks, even at the top, may do little to change the reality of policing for those it affects, the mentality of those in power speaks volumes. Take a few of Bratton's other controversial comments, which have drawn less scrutiny but offer a glimpse of what police leadership thinks of the people it polices.

Remarking on the hostility between police and communities of color, Bratton suggested a breakdown of American family values has fueled protests against cops:

Adding to previous speeches he's made on his zero-tolerance for resisting arrest (Bratton has lobbied to upgrade it from a misdemeanor to a felony), the commissioner lamented a far too liberal society mucking up the ability of his cops to arrest people:

I think it's a general sense of the liberalization of our society, and I think my average police officer in the street would tell you that he is encountering more resistance to his or her authority, and that's inappropriate because it ratchets up what they have to do to get acquiescence to things they are attempting to enforce.

In the past Bratton has made clear his ideological disdain for the social changes that happened in the 60s and 70s (you know, the civil rights era), which he argues led to out of control crime. But by waxing philosophical on family values, he also doubled down on quips he made a month ago, flirting with his famous temper during a conference in Manhattan:

I will control my cops, you control your kids... So don't be complaining to me if you can't take care of your kids at home.

The off-the-cuff comments, in contrast to prepared remarks about bridging the police-community divide, suggest a very Daniel Patrick Moynihan-esque view of society and the family. Moynihan, a former New York Senator and Assistant Secretary of Labor, famously pathologized black America as lacking in family values. That sort of thinking, of course, has been widely embraced by those who dismiss structural racism. In the head of someone who leads the country's largest police force, it doesn't exactly inspire confidence that policing problems will subside any time soon.

So where might some bonafide changes be found? Bratton recently divulged plans to move to a more 'decentralized' NYPD, with precinct commanders (many who are black and Latino) having more power. The modifications would "unshackle" precinct commanders to go after crime hot spots with "the full force of the department's resources". A pilot program called CENTCOM, seemingly named after the US Department of Defense's military command overseas, would be expanded citywide to help make the department more "nimble".

As frightening as those changes sound, moves that could rock the department into a less abusive and militaristic force clearly aren't on the menu with Bratton or precinct commanders steering the ship.

One thing that has been talked about by activists and members of the black community since the 1960s is 'community control', an arguably undefined notion that could mean decision-making power for citizens over their police. While some might point out that elected officials who appoint chiefs and commissioners, exercising very little (if any) actual power, represent a form of nominal community control, others are taking matters into their own hands. 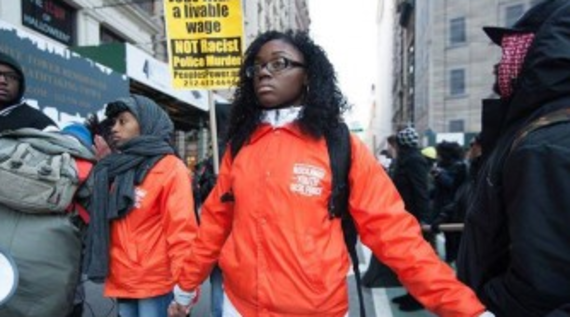 Jazmine Outlaw, 20, recently became New York City's youngest ever precinct community council president, taking the reins of the 101st precinct council in Far Rockaway, Queens. Community councils are NYPD-facilitated bodies who are supposed to work as an official conduit between the police precincts and the communities they serve. Most councils operate as NYPD fan clubs where older and generally more conservative community members show up to be frightened by crime reports and complain about their neighbors. Outlaw, whose surname is perfectly ironic, might change some of that as a young black woman whose activism includes leading protests of the police and the criminal justice system last Winter with her group, the Rockaway Youth Task Force. In fact, not only is Outlaw the youngest precinct council president, she's also the only one (to my knowledge), in 86 councils across the city, to be affiliated with the Black Lives Matter movement.

Could there be the beginnings of some form of community control here? Shannon Jones and her organization, Bronxites for NYPD Accountability, have advocated for increased scrutiny of the NYPD through precinct councils. Since last year the group, made up of mostly women of color from the Bronx, have turned up to precinct council meetings to call out the police and demand information precinct commanders aren't happy to give up, like complaints and lawsuits against police officers in that precinct. 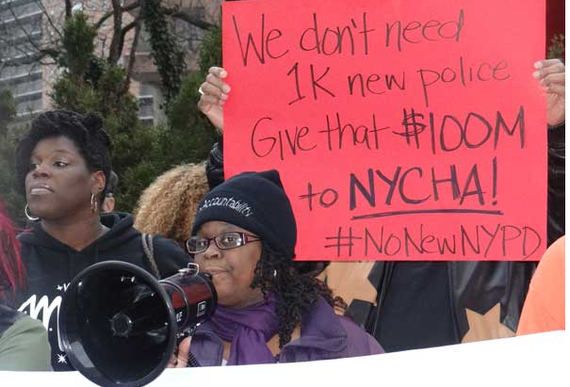 Shannon Jones at a rally against the addition of more police (Credit: Cat Watters)

"The communities understand that the NYPD is an inherently corrupt institution. Tangible change can only occur when those members of the community have control over its operations," Jones, who recently took a board position at her local precinct council, tells me over the phone.

Jones and her group, I should note, are part of the Coalition to End Broken Windows, which we're all organizing with. One of the goals of the coalition is to empower those affected most by the NYPD's racist practices, like Broken Windows policing. By encouraging young people and those committed to challenging the status quo of policing to take on the police in new ways (even ones that the police have traditionally controlled), there might be the potential for new fronts in a battle that isn't going away anytime soon.

That alone should inspire more confidence than simply hiring or promoting more black and brown cops.