It's been a little more than a year since media outlets and police organizations first started reporting about a mounting "war on cops." Law enforcement officials and commentators blamed budget shortfalls, anti-government sentiment, gun ownership and other causes for the rising violence against police.

We're now about halfway through 2012, and this year is on pace to be the safest ever for America's police officers. Oddly, no one is reporting it.

Fifty officers have died on duty so far this year, a 44-percent decrease from last year, according to the National Law Enforcement Officers Memorial Fund (NLEOMF). More remarkably, 17 have died from gunfire, down 55 percent from last year. (21 died in traffic accidents, the remaining 12 in various other incidents.) If the second half of this year follows the first, fewer officers will have died on duty this year than in any year since 1944, a time when there were far, far fewer police officers.

Not only aren't media outlets reporting on the dramatic drop this year, some are still using last year's figures to push the line that anti-police violence is on the rise. As recently as April, the New York Times ran a front-page story based on the 2011 figures under the headline, "Even as Violent Crime Falls, Killing of Officers Rises." Like those before it, the April Times article speculated on why violence against cops is on the rise. Some sources blamed the economy, which led to cutbacks in police departments, and emboldened criminals or meant officers to provide backup during emergencies. The article then quoted law enforcement officials talking about the dangers of the job.

"We try and teach that every day you go out, you are going to be encountered with deadly force by someone trying to kill you," said one FBI official who trains police officers. The Times piece did note that, at the time of its publication, officer deaths were down in 2012.

The "war on cops" articles from 2011 were even more foreboding.

One included a criminology professor at John Jay College, who blamed the violence on the "don't tread on me" sentiment of the Tea Party movement. Police officials blamed anti-police web sites, citizens who exercise their right to record misbehaving cops, the militia movement, and a decline in respect for authority. Salon writer Amy Steinberg said the attacks on cops raised "an increasingly pressing need to revisit the conversation on gun control." Craig Floyd, who chairs the NLEOMF, told UPI that cops "are being put at greater risk than ever before."

If all these trends were really happening a year ago, it's hard to explain why the last six months have seen such a change. There hasn't been any new gun control legislation in recent months. Citizens are still recording police with their cell phones (and still, in some instances, wrongly getting arrested for it), and websites critical of police are still up and running. If you believe groups like the Southern Poverty Law Center, anti-government sentiment is as strong as ever.

The truth is, the widely reported "war on cops" in 2010 and 2011 was exaggerated. Overall police fatalities did rise in 2010 and then again in 2011, but those figures are compared to 2009, which saw the fewest number of police fatalities since 1959. Generally speaking, police fatalities have been steadily declining since the early 1990s, along with the overall crime rate. And that's merely the raw number of deaths. Over the same period, the total number of police officers in America has also increased. So the drop in the fatality rate has been even more dramatic. 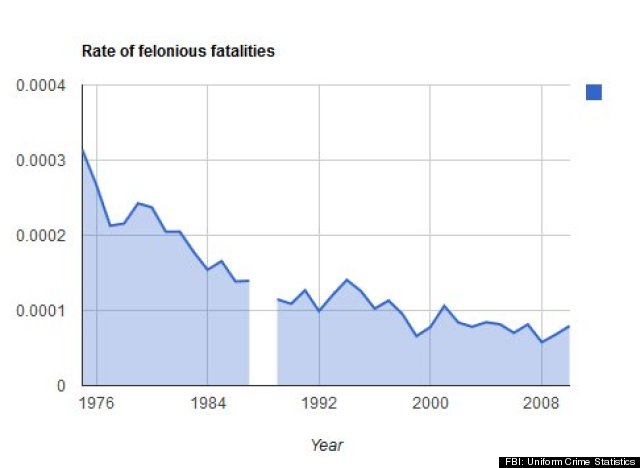 The spikes in 2010 and 2011 appear to have been driven by a few anomalous months in which there were several incidents involving the deaths of multiple officers. In March 2011, for example, 24 cops died while on-duty, and in January 2010, the figure was 22. But those are the only two months in the last 42 when the number topped 20. The following months, those figures fell back to 11 and 15, respectively. 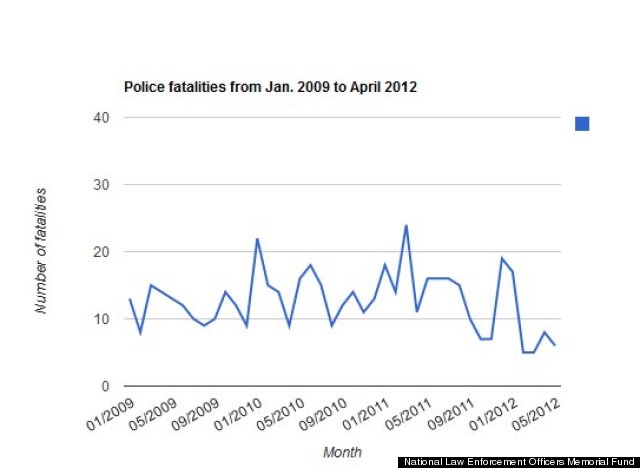 Moreover, the rate of assaults against police officers also has been dropping since the late 1980s, so the drop in fatalities cannot be attributed only to better police armor, tactics, or weaponry. Criminals aren't merely killing police less, they're also attacking them less, which would seem to put the lie to the notion that citizens today respect police less, or that criminals have grown more emboldened.

Blips in 2010 and 2011 aside (and of course, the terror attacks of 2001), the job of police officer has been getting safer for about a generation now -- much safer. That's a good thing.

None of this is meant to diminish the deaths of those police officers who are killed on the job. But how these figures are portrayed in the media, and how they're perceived by politicians and the public, can significantly impact public policy debates. Exaggerated portrayals of the dangers of police work are used to argue for more gun-control laws, to argue for increased police departments (or, in recent years, to argue against budget cuts), to defend the increasing militarization of America's police forces, to argue against more accountability and oversight with reforms like civilian review boards, and to argue for more leeway for police officers to dispense "street justice" in order to maintain order and to ensure that criminals still fear them.

There may be sound arguments on either side of these issues, but it is important that the debate and discourse be based on an accurate assessment of the dangers of police work, not one perpetuated by police interest groups and media outlets pushing a narrative that favors their own policy preferences.

Instead of exaggerating the threat police officers face, we should be celebrating the fact that their job is as safe as it has ever been.