Back in April, Jessica Greene and I wrote a piece for HuffPost about the odd and troubling trend of police shooting dogs. We looked at a couple dozen recent such stories, then called the police department in question to see if they gave their officers training on how to deal with dogs. Very few of them did.

In researching my upcoming book, I've interviewed lots of current and former cops. The retired guys for the most part say that they can't ever remember shooting a dog--or even hearing about another cop who had.

There are a limited circumstances where using lethal force against a dog could be appropriate. But even when you have a legitimately dangerous dog, discharing a firearm ought to be a last resort. Over the years, I've written about a number of incidents in which police shooting a dog have shot a bystander. Or another cop. Or a fellow officer mistook his colleague's shot for hostile gunfire, causing him to discharge his weapon (this has happened several times during volatile drug raids).

But when police departments don't even bother to give their officers any training on how to deal with dogs, the impression they're giving is that they simply don't care. If a police officers says he shot the dog because he felt the animal was a threat to his safety, the shot is almost always excused. It doesn't matter if it's a pit bll, a golden retriever, or a daaschund.

That's what it's great that we're starting to see stories like this:

The Arlington Police Department instituted a mandatory training program this past June to assist officers in dealing with dogs that are encountered during daily activities. "The goal is to provide training to officers about non-lethal options for handling dogs and gather a better understanding on dog behavior," said Sgt. Christopher Cook who oversees the Office of Communication. "By being able to recognize dog behaviors, such as types of barking, the way a dog approaches, and other clues, our workforce will be trained to respond to situations that involve dogs in homes or moving freely in neighborhoods," said Cook. In the end, improved officer confidence with appropriate animal-handling reactions will go a long way toward increasing the public confidence in our response to situations that involve dogs . . .

When deadly force is used, a thorough fact-finding investigation occurs. Back in May of this year, Interim Police Chief Will Johnson changed the way Internal Affairs investigates these types of incidents. Now, Internal Affairs investigators are required to respond to every deadly force incident involving an animal. This allows the department to collect valuable evidence, conduct interviews, and respond to the needs of the community after an incident. "Public-safety issues such as dealing with dog-related incidents cannot be resolved by police in a vacuum. Collaboration and partnerships with the community including animal advocates, external stakeholders, and Animal Services are required to engage and promote responsible pet ownership and provide a foundation for effective and appropriate police response," said Chief Johnson.

The shooting death of Lily the Border Collie at the hands of a Fort Worth police officer plays over and over in the minds of Mark and Cindy Boling.

"And then he turned toward Lily and put his arm out, and he fired his gun," said Cindy Boling, trembling a little as she recalled the scene for a video.

That video will now be played over and over in training . . .

Police officers watched the video at the start a new eight-hour course on dealing with dogs during already stressful calls.

Trainer Jim Osorio asks for a show of hands in the police auditorium. "How many people here think they can handle a dog encounter without lethal force? I think all of you can," he said.

Osorio, a former cop, tells them there are dogs in about one in three households -- nearly 80 million in all. He says officers shoot about 250,000 dogs a year... often needlessly.

"I'm going to train them whatever they carry can be used on an animal," Osario explained. "Clipboard, flare... whatever." . . .

The Bolings said this police training is the biggest thing they could hope for as Lily's legacy.

Fort Worth police Chief Jeff Halstead said the law forbids him from revealing the discipline the officer received for killing Lily in May. It happened during an investigation for copper theft.

The officer involved went to the wrong house.

Instead of suing, Mark and Cindy Boling asked that police get the additional training. "It was the right thing to do," Chief Halstead said. "The nightmare the Bolings have to live through is one I would not want for any of our residents. But I respect that they're taking this to the state and national level because it needs to be done."

Officials said it will take about two years for all officers to take the course.

It seems intuitive that there are four likely scenarios that can set the stage for an officer to shoot a dog. First, again, the dog posed a legitimate and serious threat to the officer of someone else. 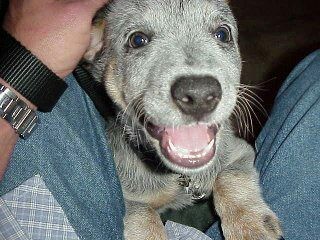 Second, the police officer has an irrational fear of dogs, or hasn't had much exposure to them. Third, the police officer is simply sadistic, or on a power trip. And fourth, the dog may be territorial or aggressive, but isn't necessarily vicious, but the officer hasn't been trained on methods of handling the dog that don't involve shooting it.

Your average beat cop is going to encounter a hell of a lot of dogs as part of his job. When police departments can't bother to give their officers training on how to interact with them, how to read their body langauge, how to appease them, and how to handle territorial dogs using tools other than bullets, they've done nothing to reduce the likelihood of any of these four scenarios.

Without training, the cop who fears dogs will continue to fear them, will continue to interpret benign gestures from dogs he encounters as a threat, will continue to shoot dogs, and will continue to be excused for it. With training, he gets over his fear, or at least learns how to deal with. He doesn't panic when a dog gets territorial, because he's been given instruction on how to recognize and distinguish that from aggression, and now has the know-how to deescalate the situation and put the dog ease.

Without training, the sadisitc or power-tripping cop can continue to kill dogs for whatever reasons might motivate a sadistic or power-tripping cop to do so. He'll continue to falsely claim he feared for his safety, and he'll continue to get away with it. With training, there's now some accountability. Now, the next time he kills a dog, he can be asked why he didn't resort to the other options he learned in his training. If it's a small or docile breed, he no longer has an excuse, and the police department no longer has an excuse not to discipline him. (Okay, so at least in theory.)

Part of this goes back to the isolated, us vs. them mentality that has taken root in two much of the police profession. It's notable that the U.S. Postal Service gives all of its workers dog training, and reports very few incidents. Some cops kill dogs simply because they can. I interviewed former Seattle police chief Norm Stamper about this a few years ago. He characterized the problem as merely a symptom of something larger and more troubling:

"I think all of this drug-war imagery has produced a mentality that didn't used to exist. It's 'I'm part of a war, I have a mission, and nothing is going to get in the way of me completing that mission.' You're kicking down doors, barging in with guns, and when animals do what animals do, they become collateral damage. Too many officers have gotten rather callous about it, I'm afraid."

It should go without saying that not all cops are heartless puppy killers. I doubt most, or even a significant percentage of them are. The problem is that this is happening enough that it now makes news a couple times per week. And with just a few exceptions, the cop had no training before the shooting, and faced no real consequences after. The message that sends from the police department to the community is that a cop shooting a pet in front of a couple kids is now just part of policing. It may be regrettable, but it's just something we're going to have to start accepting. That message, understandably, doesn't do much for relations between police and the communities they serve.