A police officer who choked an unarmed man to death on a public sidewalk will not face trial. This is the second recent high-profile case in which a grand jury declined to indict a white police officer who had killed an unarmed black civilian -- first Michael Brown in Ferguson, Missouri, and now Eric Garner on Staten Island, New York.

Those decisions underscore a fundamental truth about police force in America: that the laws are deeply stacked against the possibility that police officers will be charged, let alone convicted, of killing civilians, particularly African-Americans.

In Garner's case, the medical examiner ruled his death at the hands of the New York City Police Department a homicide. Garner had repeatedly pleaded that he couldn't breathe while an officer held him in a chokehold, which is itself barred by NYPD rules. The homicide occurred in broad daylight and was filmed from close range.

“You'd have to be blind or prejudiced to say there's no probable cause,” Garner’s mother said before the grand jury's decision came out.

Grand juries are meant to determine only whether there is "probable cause" to indict a criminal suspect -- a standard far lower than the "beyond a reasonable doubt" standard that comes into play when deciding guilt at trial. Federal prosecutors secured indictments in more than 99.9 percent of the 162,000 cases they brought before grand juries in 2010. But in Missouri and New York, two grand juries decided that even that low hurdle had not been surmounted.

“First Ferguson, now Staten Island,” said Vincent Warren, executive director of the Center for Constitutional Rights. “How can anyone in the community have faith in the system now?”

And how, one might wonder, has the United States managed to imprison more than two million people if grand juries can’t find probable cause for murder or even manslaughter in two such straightforward cases, where the identities of those who killed and the means of death were clear? 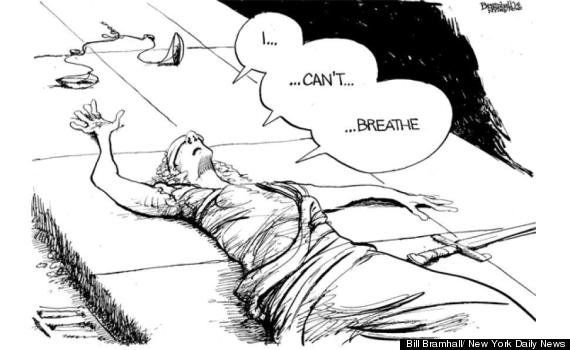 Prosecutors have wide discretion regarding what evidence to provide a grand jury and need only show that there is enough to believe charges are warranted. In Wilson’s case, the transcripts show that the prosecutor took pains to present as much conflicting evidence as possible, instead of relying on the multiple witnesses who said the officer shot Brown while his hands were up. Typically, such conflicting evidence is presented in public to a trial jury, not in private to a grand jury. Wilson’s prosecutor also did not lay out a cohesive narrative of the shooting, instead dumping a lot of evidence before the jurors and leaving them to sort it out.

In both the Wilson and Pantaleo cases, the officers testified in their own defense -- which is unusual -- with no cross examination -- which is questionable.

Since Brown’s death, civil liberties advocates have pushed for police to embrace the use of body cameras, a call seconded this week by President Barack Obama. The idea is that the presence of cameras would restrain police misbehavior. When officers in California realized they were being filmed beating Edgar Arzate this past summer, they moved him out of view of the camera before continuing their assault -- suggesting that some officers at least prefer not to beat civilians on the record.

Rialto, California, has been carrying out a real-life experiment by outfitting its uniformed officers with body cameras in February 2012. Since then, according to The Guardian, citizens' complaints against the police have fallen 88 percent and officers' use of force has dropped by 60 percent.

But what the Garner case shows is that though the threat of video evidence may restrain behavior, it will not make prosecutions of police officers a slam-dunk.

The deaths of Brown and Garner highlighted, again, the problem of police brutality against minorities -- and America's unwillingness to do anything about it. In deeply segregated St. Louis County, nine of the 12 grand jurors were needed to reach a verdict against a white officer who shot a black teenager, and nine of the 12 were white.

Had the Missouri prosecutor wanted an indictment, he still surely could have obtained one given the evidence he had. But prosecutors work closely on a day-to-day basis with police forces, and they are deeply reluctant to damage that relationship.

A similar dynamic played out with the Staten Island grand jury. The prosecutor took an extraordinary amount of time to present evidence, and Pantaleo appeared to tell his side of the story.

Wilson made his case before the grand jury in service of his primary defense, that he feared for his life. Whether that fear was reasonable, however, is difficult to disentangle from racism itself. By describing Brown as “a demon” coming at him, Wilson recalled some of the more vicious stereotypes of African-Americans from an earlier era.

In a statement earlier this week, the Yale Black Law Students Association called for a “change in federal and state laws that allow justifiable homicide to be pegged to the abysmally low and racially variable standard of ‘feeling’ threatened.”

Garner had been repeatedly harassed by police and was suspected that day of selling loose cigarettes without a license. The harassment was part of a policing strategy known as "broken windows," in which minor offenses are aggressively targeted. The strategy has been the subject of intense criticism, particularly on civil rights and civil liberties grounds, and Garner himself had apparently had enough.

"It ends today," Garner said, just before he was killed.

After the grand jury's decision not to indict him, Pantaleo said, "I became a police officer to help people and to protect those who can't protect themselves. It is never my intention to harm anyone and I feel very bad about the death of Mr. Garner. My family and I include him and his family in our prayers and I hope that they will accept my personal condolences for their loss."

Meanwhile in Ferguson, the lack of another indictment was met with outrage, but little surprise. “I hope tonight there is the same kind of action as when the Darren Wilson non-indictment came out,” Shanta Driver, national chair of By Any Means Necessary told HuffPost.

"The no indictment of that officer in New York shows the importance of the continuation of trying to build a movement and the example of what Ferguson did in terms of standing up and fighting. That's got to spread to places all over the nation, because that is the only way to convince the powers that the racist murder of young black and Latino people will not be tolerated anymore in America,” Driver said.

Some Ferguson residents saw the Garner decision as evidence that the mantra of the movement sparked by Brown's death, "Black Lives Matter," must resonate far beyond Missouri.

"They’re showing the black kids in this country that black people's lives are disposable,” said Toriano Johnson, a barber from Ferguson. “We haven't gotten justice in either cases where police overstepped their boundaries. It's a sad day for America.”

Johnson saw the decisions as sending the country backwards. “This pretty much took us back to the 1940s. ... That's where we living at right now. This is a turning point,” he said. “It's about to get real bad."

For those hoping to see officers who kill unarmed people at least publicly tried, there are likely more disappointments in store. Tamir Rice was 12 years old when police shot and killed him last month within two seconds of their car's approaching him. The story they have told since does not match the video.

Akai Gurley also died last month, shot by a New York officer in what the police say was an accident.

Just a few days ago, a grand jury in Jasper, Texas, declined to indict two white officers who had brutally beaten a black woman on video. They had arrested her for an unpaid ticket, though she had been making monthly payments.

Sign up below to get Ryan Grim's politics newsletter